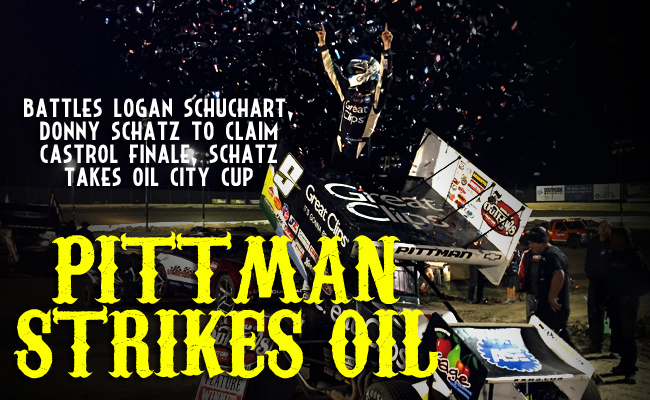 EDMONTON, Alb. – Aug. 29, 2015 – Daryn Pittman got a nice birthday surprise Saturday night at Castrol Raceway as he drove his No. 9 Great Clips car to victory lane in the finale of the Oil City Cup.

The victory was not an easy one as he battled past a hungry Logan Schuchart and held off a late charging Donny Schatz to score his fourth World of Outlaws Sprint Car Series victory of the season – his first in three months.

“Great team effort for this whole Great Clips team,” Pittman said. “It’s been a long time, way too long. These guys work too hard and are too good to stay out of victory lane as long as we have.”

Pittman said it has been a frustrating year for his Kasey Kahne Racing with Mike Curb team – he battled injury early on in the season and success has not come as frequently as it did in the prior two years.

“We just haven’t been able to hit on anything and we just threw something at it there in the feature,” Pittman said. “I don’t know if it’s a huge difference or not but man, my car was really good. It wasn’t really good at the beginning of the race but it just got better as the race went along which is what you want.”

Earlier in the night, another Schatz sweep of the Oil City Cup looked almost inevitable until rare bad luck struck the No. 15 Bad Boy Buggies/Chevrolet Performance team. Even then, he did not make it easy on the eventual winner, Pittman.

David Gravel led the field until the first caution on lap 10 as Schuchart worked to hold off Schatz for second. Schatz made it around Schuchart and nearly got around Gravel. On the restart, Schuchart jumped to the lead in his No. 1S Mark Pell Tire Service/Marty Thompson Investments car with Shane Stewart moving into second. Five laps elapsed until a crash involving Joey Saldana and Paul McMahan brought out the red flag.

As the field began to push for the restart, Schatz could not get his car to fire.

“Something got lodged in the fuel shutoff,” Schatz said. “You could move the lever but nothing was opening.”

A trip to the work area sent Schatz, who won the previous night at Castrol, back to the 16th position.

When the race got back underway with 15 laps to go, Pittman jumped to the lead with Schuchart second, Stewart third and Brad Sweet in fourth.

As Pittman began working his way through traffic on lap 20, the field bunched back up. Sweet got around Stewart for third and Schuchart tried to battle back for the lead. Another caution came out on lap 26 just as Schatz had worked his way back to the fourth position.

The fight was on with four laps remaining. Pittman maintained his lead as Schuchart tried to hold off Sweet in third and Schatz in fourth. With two laps to go, Sweet got a run on Schuchart on the front straight and took over second as the drivers exited turn two. Schuchart threw a slider going into turns three and four but as his car drifted up the track off the turn he made contact with Sweet that sent Sweet into the outside fence. Sweet then went for a tumble. A red flag came out.

Sweet was able to get his car to the work area and fixed to finish the final two laps.

Schatz moved to second position, 14 positions better than where he had been 13 laps earlier, and set his sights on the lead. Pittman however held tough on the single file restart and parked his car on the front stretch. Schatz finished second with Schuchart in third.

“Tony Stewart’s guys did a phenomenal job to get me back going,” Schatz said of his team. “I had a really good racecar so I had to be somewhat patient and try to get through the best we could. It’s a long way to come through there but we got a lot of cars right away. I just wish we would have had a better shot or a few more laps there at the end, but that’s the way it goes.”

With a win on night one and a second place finish on night two, Schatz took home the 9th annual Oil City Cup championship. It is the third year in a row Schatz’s name has been added to the trophy.

An apologetic Schuchart said the move on Sweet was not the cleanest he has ever made.

“I don’t want to race like that and I feel bad about it,” Schuchart said. “I apologize to the (Kasey Kahne Racing) guys and Brad. I’m just trying to race hard – I really want to win.”

“It was a decent run. Congratulations to Daryn and Donny, they drove a great race. It was fun and we’re happy to be here.”

Pittman complimented crew chief Kale Kahne and crew members Josh Heidkamp and Kolten Gouse for a great job all season despite the frustrations.

“It’s been hard for them to keep their heads up and I haven’t done a very good job a lot of times when they do give me a good car so for us to finally put a night together and be pretty solid, qualify well and get in the Dash, it’s a relief.

“We’re still searching, trying to compete with that 15 night in and night out but we’re happy with this win. We’ll take it and go on to Skagit.”

The World of Outlaws Sprint Car Series continues the march west as it next takes on Skagit Speedway’s Monster Meltdown on Sept. 4 and 5. To find out more information and to learn how to buy tickets, visit http://woosprint.com/skagit-speedway.

RACE NOTES: Joey Saldana took quick time tonight with a lap of 14.707 seconds. This is the 14th quick time of the season for Saldana who is the season’s leading qualifier… Daryn Pittman scored his fourth World of Outlaws Sprint Car Series victory tonight. It is his first ever win at Castrol Raceway… Donny Schatz won the Oil City Cup. It is the third straight year Schatz has won the trophy… Kraig Kinser was the night’s KSE Racing Hard Charger, advancing 12 positions to finish in 10th.