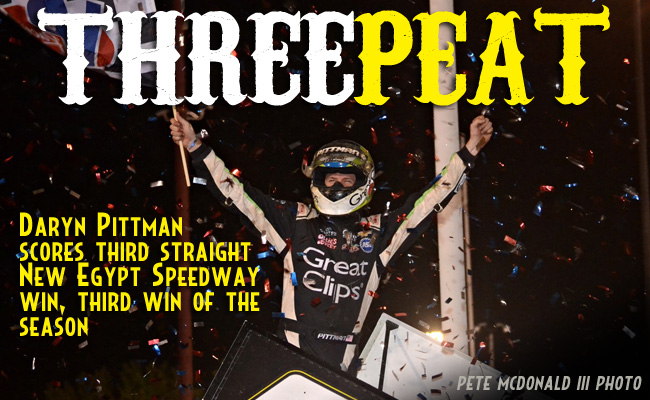 NEW EGYPT, N.J. – May 19, 2015 – When it comes to New Egypt Speedway, one World of Outlaws Sprint Car Series driver stands out among the rest. On Tuesday night, Daryn Pittman again proved he is the man to beat at New Egypt as he scored his third win in the last three series appearances there.

Through the 30 lap Jersey Outlaw Showdown feature Pittman battled through traffic and held off Shane Stewart and ultimately Donny Schatz.

“You work for all these wins,” Pittman said. “None of these are given to you I don’t care where you start. Stats say we started on the pole and he started ninth but these races are hard to win and we haven’t done it for a really long time.

“We really struggled in our heat race. It’s hard to say when you come to a track like this that I’ve got so much confidence that we can win. We’re not sure if it really helped us that much or if I just finally sat up in the sat and got the job done and drove this thing like I should every night.”

It was just two months ago that Pittman suffered a broken collarbone in a crash at Placerville (Calif.) Speedway. Pittman said he felt like he was mostly to blame for the struggles the team has had since that time.

“Just having a hard time getting a feel for what I need in the car and getting comfortable in the car since I got hurt,” Pittman said. “It’s no excuse – this is a good team and deserves to win a lot of races and we’ve just been coming up short.”

Pittman was strong through the opening portion of the night and built up a sizable lead as he raced in clean air. He hit traffic on lap seven and the two cars behind him, Stewart and Kerry Madsen, closed in.

Farther back, Schatz was moving forward. After starting in ninth, he got around Ryan Smith in the opening laps, then around Joey Saldana. By lap 12 Schatz had moved in to fourth after getting around Logan Schuchart.

Past halfway Schatz began closing the gap with Madsen in third. On lap 19, Schatz looked low and got the run he needed as he came off of turn two.

The first caution of the night flew on lap 22 and was followed by another caution on the restart. That proved pivotal for Schatz who worked his way around Stewart the following lap to take over second.

Five laps later, Schatz had caught Pittman. Using the middle lane, Schatz managed to get side-by-side with Pittman and at one point even had a nose on him, but Pittman had the speed coming off the corner. Three laps later, it was Pittman who took the checkered flag with Schatz in second, Stewart in third and Madsen in fourth.

With his daughter Kady in his arms and daughter Taylor at his side, Pittman thanked his family and crew for their support over the last couple of months.

“The win is great but it doesn’t get any more special than having my girls up here,” Pittman said. “This is the first victory lane that Kady has been able to be up here with me. So that’s pretty special. They’ve been the only thing that’s made it very bearable to go back to the motorhome as much as we’ve been struggling. Going back and seeing their faces, they don’t care how you run.”

“Hats off to this whole Great Clips team, (Kale Kahne, Kolten Gouse and Josh Heidkamp), they work their tails off. And having given up as much equipment as we’ve torn up this year and as bad as we’ve been running, this is for them.”

Schatz, who had won three of the last four races coming into the night, gave kudos to his No. 15 Bad Boy Buggies team.

“We had it going there to run those guys down in open track and traffic,” said the Tony Stewart/Curb-Agajanian Racing driver. “That was a lot of fun. The yellow, I thought we’d be alright there. I tried everything I could to get in there; he just didn’t make any mistakes. Some nights you’re just second, I guess. That’s us tonight.”

Stewart and his Larson Marks Racing team persevered throughout the night after changing not one but two engines.

“We survived tonight. (Crew members Andrew Seamans and Scotty Martin) pulled it together for me tonight,” Stewart said. “And for us to end up on the podium says a lot about those guys. Wish we had a little bit more. I thought I had something for Daryn early on in the race and then the restarts kind of killed me a little bit.”

Joey Saldana set a new track record during qualifying tonight with a lap of 13.317. The previous track record of 13.396 was set by Pittman in 2013. Paul McMahan took home the KSE Racing Hard Charger Award after advancing eight positions to finish in fifth.

RACE NOTES: Tonight’s win was the third win in a row for Daryn Pittman at New Egypt Speedway. He stood in victory lane in 2013 and 2014… Daryn Pittman scored his third win of the season tonight at New Egypt Speedway. He is now tied with Shane Stewart for second most wins this season… Paul McMahan was tonight’s KSE Racing Hard Charger, advancing eight positions to finish in fifth… Joey Saldana took home quick time, his third of the season and set a new track record with a lap of 13.317 seconds.