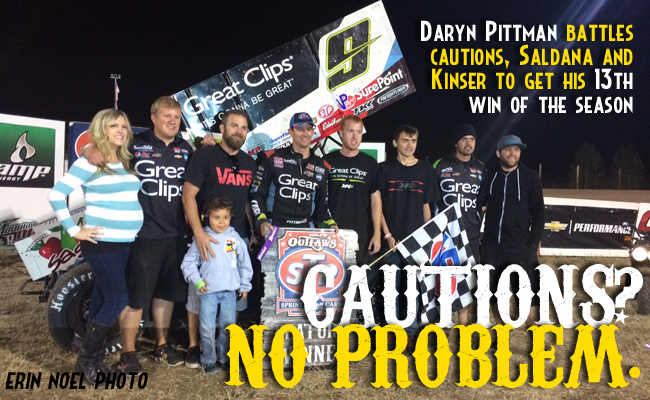 Pittman’s toughest obstacle though just might have been the yellow flags that plagued much of the feature on the 1/3 mile oval. Though it was on the second caution of the night that Pittman took over the lead in his Great Clips car, he was forced to contend with five others and a red flag as the leader.

“I wasn’t liking the cautions for sure,” said Pittman, an Owasso, Okla. native. “You know, you’re running it through your head that that’s how you got the lead was on the outside on a restart so it could easily happen to you. I didn’t really know what to do if I should block someone on the outside of me going into one or just concentrate on hitting the bottom and hope that they didn’t get a run.

“So I just stuck with the bottom and luckily no one was able to get by us. You never know what to do with those and man that seemed like a lot of caution laps. I didn’t even feel that great on the single files. I knew somebody could still get a shot at it.”

Kraig Kinser led the field to the green as the first caution flew on lap one. As the field returned to green Kinser jumped out to a strong lead that evaporated with another caution on lap four. When the field again went back to green, Pittman got his shot, driving around Kinser and taking over the lead before the field could complete another lap.

“It was really tricky going into one,” Pittman said. “It was really slick on the bottom, so I knew if I had a shot it was going to be on a restart. When (Kinser) lifted to hit the moisture in the bottom of one I could just maybe sail through the middle. I really didn’t think I could get back in front of him before he picked up the moisture off of two. I just had a good car and it worked perfect. I knew getting out front and getting down to the bottom was going to be key.”

On the restart for that fifth caution, McMahan got together with Kraig Kinser. The contact left Kinser flipping down the front stretch. When the wreck was over, Shane Stewart’s night was done and David Gravel’s car was damaged.

“I was fortunate to be on the inside lane for a lot of the restarts and you know on that last restart, I’m trying to get through the bottom, Kraig’s trying to get by me and we got together,” said McMahan, who finished the night in third in his CJB Motorsports car. “It’s unfortunate for them. I feel bad for Kraig. He’s a great racer.”

Two more yellows followed, including one with just two to go that led to a green-white-checkered to close out the feature. Pittman won, holding off Saldana, who finished second, and McMahan in third.

“Kale (Kahne), Kolten (Gouse) and (Mike) Carber, they always give me a great car,” Pittman said. “This was just a great team effort and a good car that was a lot of fun to drive.”

The World of Outlaws STP Sprint Car Series continue its drive south with two nights at the Gold Cup Race of Champions at Silver Dollar Speedway in Chico, Calif. on Sept. 5 and 6. The Outlaws then take on Antioch Speedway on Sept. 7 before returning to the Midwest.

SOUTHERN OREGON SPEEDWAY NOTES: Daryn Pittman scored his 13th win of the season… Donny Schatz’s podium streak which extended to 18 races ended Wednesday night… Donny Schatz scored his seventh quick time of the season… Brad Sweet was the KSE Hard Charger Award recipient for the night after advancing 13 positions in the A main to finish in fifth.