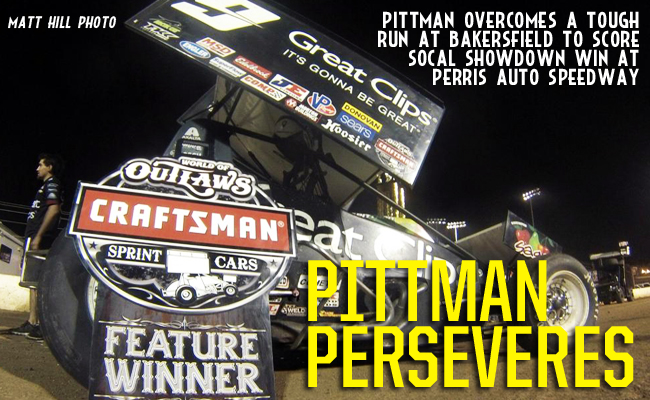 PERRIS, Calif. – April 16, 2016 – Daryn Pittman dominated Saturday night’s SoCal Showdown at Perris Auto Speedway to claim his second World of Outlaws Craftsman® Sprint Car Series victory of the season. The win came one night after a crash ended his night while he led at Bakersfield Speedway.

“Last night was dumb,” Pittman said of his Bakersfield Speedway run. “I ran over Joey [Saldana] and took ourselves out of contention for a win there and tore up a lot of equipment.”

Pittman, who claimed his first ever series win at Perris, said perseverance is the motto of his No. 9 Great Clips team.

“This car has been so fast and we’re right there in the hunt every night,” Pittman said. “We’ve just got to put it together and that starts with me.

“This track has been really good to me and I got my very first Outlaw win here beating Steve Kinser to the line by I don’t know how close – it was really close. It’s one I’ll never forget so I always enjoy coming here.”

Pittman, who led the feature flag-to-flag, had to contend much of the night with traffic and perhaps more pressing, his Kasey Kahne Racing with Mike Curb teammate Brad Sweet behind him.

The all KKR front row, was in charge early, as Pittman took the lead on the first lap. As he worked his way through lappd traffic, he built up an impressive multi-second lead over Sweet and Shane Stewart.

Sweet held firm in second as Stewart worked to close the gap on the second place position. The two were within a car length of each other much of the night.

With one lap to go, Pittman made contact with Paul McMahan that sent McMahan spinning. The caution flag waved. Pittman later apologized to McMahan in victory lane.

The reset field, with a green-white-checkered finish ahead, looked for one last chance to make a move.

Stewart, looking for the second position, made a bold charge on Sweet through one and two but was not able to get around the No. 49 Razorback Professional Tools car. The move opened the door for fourth-place running Saldana to close the gap with his No. 83 Roth Motorsports car.

Saldana completed the pass on the final lap coming off of turn four.

Pittman claimed his second series win of the season – the first driver not named Schatz or Pittman to score a repeat win – and Sweet picked up his tenth podium finish of the season.

“We’re running up front every night and it’s just a good team effort,” Sweet said. “We’ve got momentum on our side and a little bit of luck here and there but the car has been really fast… We’re happy for Daryn and his team. It’s a KKR 1-2. You can’t beat that.”

The World of Outlaws Craftsman® Sprint Car Series returns to action on Monday at USA Raceway in Tucson, Ariz. Tickets remain for the NAPA Wildcat Shootout and are available at http://www.WorldofOutlaws.com/Tickets or by visiting the track box office on the day of the event. Learn more information at http://woosprint.com/usa-raceway.

RACE NOTES: Daryn Pittman became the third different repeat winner of the 2016 season joining Donny Schatz and Brad Sweet as the only drivers with the distinction. Seven different drivers have stood in victory lane throughout the season… Brad Sweet picked up his 10th podium finish of the year… Donny Schatz got the night’s quick time award, his second of the season.