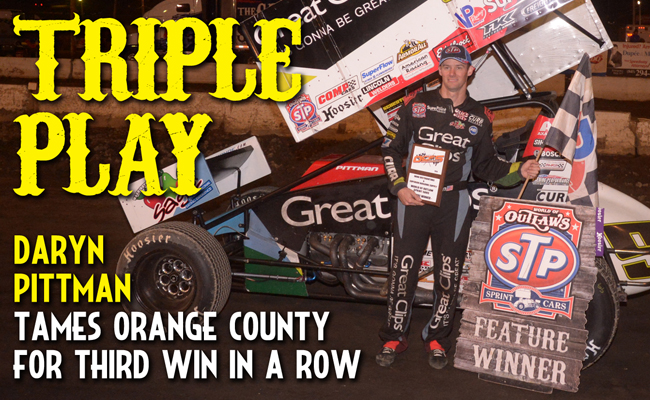 “I need somebody to pinch me,” said Pittman, the 2013 series champion from Owasso, Okla. “This has been a whirlwind week. We struggled at Haubstadt (Ind.) and Wilmot (Wis.) last week and took a lot of blame on that myself and really needed to, as a team, come in here and run well and that was our goal. Never could we have dreamed that we would come up here and run as well as have.”

Just as he did Friday and Saturday nights at Williams Grove, Pittman led flag-to-flag. Helping his efforts in each win, including at Orange County, was his finishing position in the Dash – and the random Dash inversion.

“We’ve had a lot of luck,” Pittman said. “I think, hands down, we were the car to beat Friday night at Williams Grove. But Saturday and tonight the Dash draw obviously went our way. But like I said, the Great Clips team gave me a car good enough to take advantage of our starting spot and stay up front.”

Pittman’s three wins over the weekend pushed him to the points lead following Saturday night’s event in Williams Grove. Following Orange County, he has extended his lead over second place Joey Saldana to 12 points. Just 56 points separate the top four drivers – Pittman, Saldana, Donny Schatz and Paul McMahan – in the fight for the championship.

After coming out on top in the Dash, Pittman and Saldana led the field to the checkered flag at Orange County, followed by Schatz, Steve Kinser and Cody Darrah.

The big 5/8-mile track tested each team’s ability to generate high horsepower in the 25-lap A-main. Pittman jumped out to an early lead and saw a challenge from Saldana as he neared lapped traffic on lap nine. Saldana got close enough at this point to challenge for position, but after getting around Logan Schuchart, Pittman was able to hang on, sticking behind Kraig Kinser for much of the event. Pittman took the checkered with the Saldana, Schatz and Steve Kinser behind.

Second-place finishing Saldana in his Motter Equipment car struggled with his tires all night, including losing his right rear after the checkered flag fell. He said he expected more teams would use the same softer compound his team did, but many did not.

“I’m shocked I even made it,” said Saldana, of Brownsburg, Ind. “With about 15 to go it started shaking pretty bad. That was definitely a blessing from someone – nothing we did other than trying not to blow the tire and luckily it blew after the checkered so definitely a good run for us.

“We made it, that’s all that matters. We finished second and we’ll go on to New Egypt.”

Schatz, who piloted his STP/Armor All car to a third place finish, said the track just would not

“It was tricky to get moving around,” said Schatz, of Fargo, N.D. “We tried everything we could and couldn’t make anything happen. I guess some days are like that.”

Schatz, who sits just 24 points out of the championship lead, said he’s happy that he is not fighting the same deficit he faced at this same point last season. He said he looks forward to the heat of the summer as his team battles for more wins.

ORANGE COUNTY FAIR SPEEDWAY NOTES: Daryn Pittman has started first in the Dash in his last three wins – zero were inverted on Friday, eight were inverted on Saturday and zero. He won the last three races from the pole position and led every lap in all three events… Prior to Williams Grove, Pittman was tied for the most wins on the season at three. He now has double the wins of the next nearest drivers, David Gravel, Donny Schatz and Brad Sweet… The top three finishers in tonight’s race, Daryn Pittman, Joey Saldana and Donny Schatz finished in the same order on May 16 at Williams Grove.