Skip to content
Outlaws Set to Battle Northern California’s Finest During the Month of March
Tags: 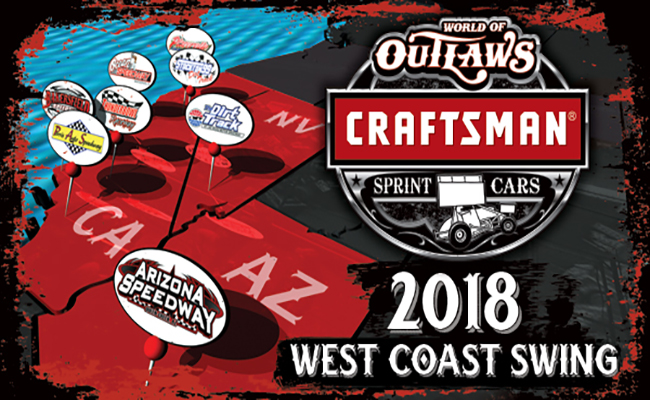 CONCORD, NC – March 3, 2018 – The World of Outlaws Craftsman Sprint Car Series is set to embark on a month-long journey of the Golden State, where they will battle some of the toughest local competition they will face all season. After a washout in Perris, the Outlaws first date in California will be a two-day affair at the Thunderbowl Raceway in Tulare, CA on March 9 and 10.  The Series will race three weekends in California as well as a mid-week race at Placerville Speedway on Wednesday, March 21.

Last year in Tulare, David Gravel scored his first of 18 victories on the first night with Donny Schatz capturing his eye-opening sixth win of 2017 on Night Two. Through five races in 2018, The Greatest Show on Dirt has seen two faces dominate, the aforementioned Schatz has three wins with young Sheldon Haudenschild notching his first two career Outlaw triumphs as well.

The World of Outlaws Craftsman Sprint Car Series is celebrating its 40th Anniversary and currently has 19 teams following the tour full-time. Of those is Grass Valley, CA native Brad Sweet, who is coming off a strong season that saw him finish second in Series points. “It’s always nice to be home. Every racer likes to be in their home state in front of their family and friends,” Sweet said about the upcoming California swing. “We race all over the country, it’s nice to be able to sleep in your bed in between races,” Sweet, who is currently third in the Series point standings, added with a smile.

After Tulare, the Outlaws return to the Stockton Dirt Track on March 16 and 17 with the running of the FVP Platinum Battery Western Spring Shootout. Last year it was the California Outlaw Brad Sweet topping a stout field of 39 cars for his first victory of the season. The other night was lost to Mother Nature.

Sweet will once again take center stage on Wednesday, March 21 when the Series runs the Brad Sweet Placerville Short Track Showdown presented by NAPA Auto Parts. “I live in Placerville now, it’s great that my home community can bring an event like this together that has an impact. It is a huge group effort that couldn’t happen without a lot of hard work from a lot of people. I’m glad to be a part of it,” Sweet said of the upcoming mid-week race.

There’s a lot for Brad Sweet to be excited about as two days later the Outlaws will invade Ocean Speedway and Bakersfield Speedway on March 23 and 24, respectively. The Outlaws did not race at either track last year but did so in 2016 with Sweet stealing the show and winning both events.

Following a weekend off for Easter, the Outlaws will conclude their West Coast swing with the running of the Arizona Desert Shootout at Arizona Speedway in Queen Creek, AZ. It will only be the third-ever visit to the facility by the World of Outlaws, with previous winners being Rico Abreu and Shane Stewart.

It’s a jam-packed month and if you can’t make it to the track, you can catch all the action LIVE on DIRTVision.com with their new FAST PASS option that gives you 30 days of live video coverage for just $39.