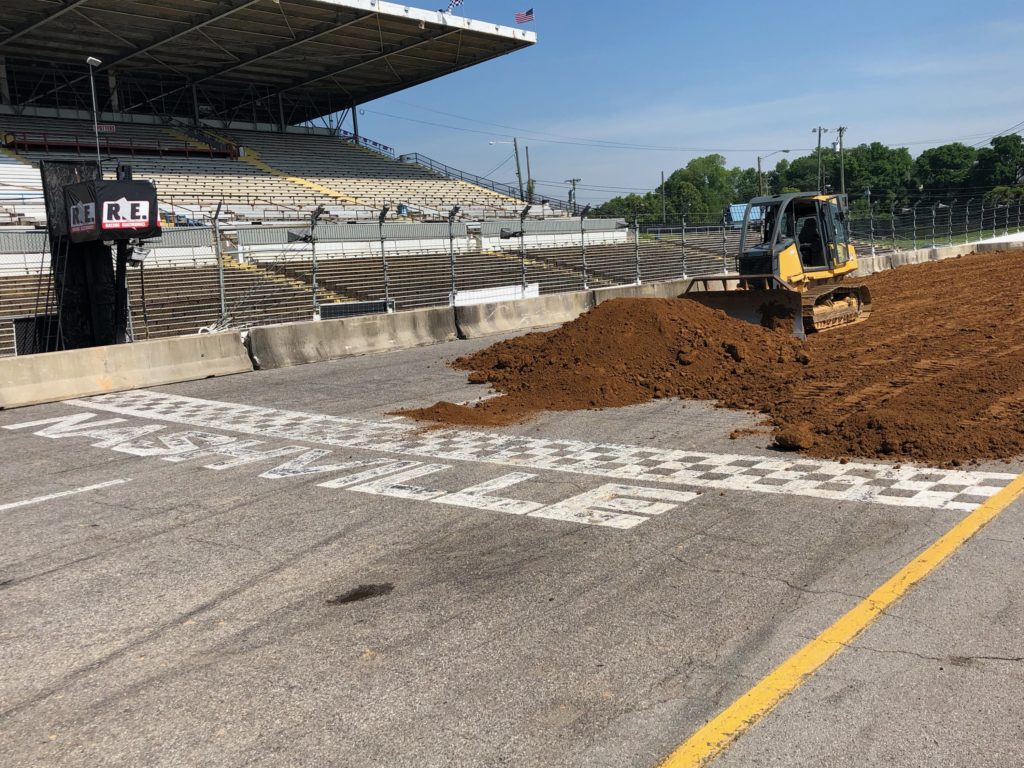 Putting dirt on top of asphalt is nothing new for the World of Outlaws NOS Energy Drink Sprint Car Series; the practice dates back decades prior to the formation of the series. Bringing The Greatest Show on Dirt to the historic Nashville Fairgrounds Speedway on the other hand, is brand new.

The planning process began in 2018, long before the first dump truck full of Tennessee clay was dropped onto the quarter-mile bullring at the historic venue. While numerous players were involved in the process, World of Outlaws President Tom Deery credits Events Manager Megan Hazel with the idea.

“Megan lived here for a couple of years and knew how exciting the racing at Nashville Fairgrounds Speedway was. She brought up the conversation. In the meantime, Matt Crews of Brewco Marketing Group, an event production company that has a long history with NASCAR events, was talking to (World of Outlaws CMO) Ben Geisler about an event in Nashville. Then, I was talking to Jason Rittenberry, a Nashville promoter, at a SEMA event about the idea, and the seed that Megan planted grew into this,” said Deery

William Scogin, Clarksville Speedway owner and part-time track prepper, was on hand to help work the dirt and get the track configuration dialed in. Finding the right dirt for such an event was a logistical challenge. Originally, the dirt was going to come from nearby Nissan Stadium, where a SuperCross event was held just a few weeks prior.

“They [AMA Supercross] just put too much sand in it for us. So, we had to go to a backup option,” said Scogin. “The backup option was to get freshly dug up dirt from further away. Yesterday we put on 72 loads, and we only had eight trucks running. Traffic is killing us. The dirt we were going to use is only a couple minutes away; we’d be halfway done by now. People don’t realize how much work this is to do.”

Moving enough dirt to cover the asphalt was a feat in and of itself. Over the course of four days, a constant stream of dump trucks shuttled the soil some 20 miles from Millersville, Tenn. Fighting traffic and weather, it took each truck about an hour to make a roundtrip. The man in charge of the move was Shane Trucking and Excavating owner Carl Shane.

A lifelong race fan, Shane dabbled in racing himself as a young man.

“I raced motorcycles in my younger days, and I’ve done a limited amount of dirt track racing in automobiles,” Shane said. “We have worked with another group that does monster truck events, so not particularly a racing event like this with the World of Outlaws Sprint Car races. Our biggest challenge is the weather and the condition of the soil. This is pretty much like a typical construction project — except we’re doing it on asphalt at a racing venue.”

After heavy rains on Wednesday morning, the hauling was halted while a team of people worked the dirt that had already been put down. Using heavy equipment, they spent the better part of the afternoon driving back and forth over the clay surface to expel the moisture and allow the dirt to compact.

“It’s easier to manage less dirt than more dirt. So, if it’s already wet, the less you have, the less you have to dry. When they were driving over it yesterday it was still pretty spongy, so we’re going to sheepsfoot it and roll it some more. It’s firming up a lot, but it’s still got some moisture in it,” said Scogin.

While the dirt was being laid down another team worked to move two-ton barriers into place, reconfiguring the small track into a suitable course for the 900 horsepower sprint cars. During the weeks leading into the event, the crew will also add fencing, guardrail and cables.

The renewed interest in the speedway by community members and civic leaders is welcomed by everyone in the industry. The track has seen it’s ups and downs over the last decade, and recent attempts by large organizations and politicians to improve the facility and preserve its history has brought renewed hope for fans and those in the industry.

“I’ve lived here all my life. It’s good, we don’t need to lose any more race tracks. All race tracks need to survive. Anything, whether it’s asphalt or dirt, we need everybody’s support in this industry,” mused Scogin.

When the lights go on for the first event of the two-weekend show, 12 trucks will have made a combined 181 trips, hauling in a total of 3,500 cubic yards of dirt. That comes out to roughly 7,000,000 pounds of dirt.

For Hazel, seeing the project come to fruition has been a professional highlight. “Seeing the dirt starting to go down after 15 months of dreaming and planning is absolutely incredible,” she said. “It has been a ton of work by so many to make this idea come to life. I’m so thankful for leadership that listened to an idea, believed in it and helped push it to become a reality.”

More than $150,000 is up for grabs over the course of the event, making it one of the Outlaws’ biggest racing weekends all year. Drivers like Tony Stewart/Curb-Agajanian Racing’s 10-time Champion Donny Schatz, Kasey Kahne Racing’s Brad Sweet, Kyle Larson Racing’s Carson Macedo and Stenhouse Jr.-Marshall Racing’s Sheldon Haudenschild will all be trying to capture the Friday $15,000-to-win Feature and the Saturday $25,000-to-win Feature.

Tickets are available online or by calling 844-DIRT-TIX Monday through Friday between 9 a.m. and 5 p.m.