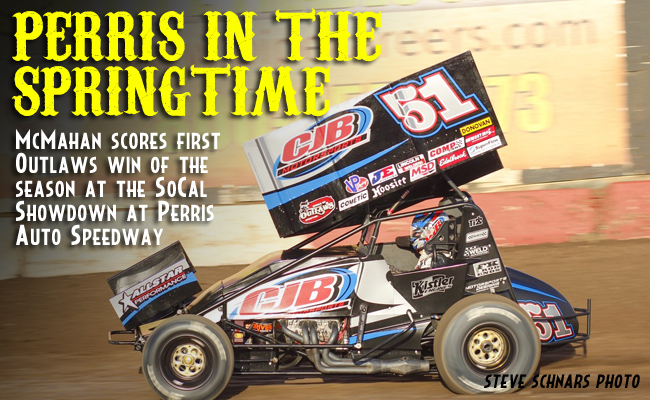 A Tale of Two Ends: McMahan Scores His First Win of the Season

With his win at Perris, the CJB Motorsports driver is the ninth different winner of the season

PERRIS, Calif. – April 18, 2015 – Saturday night’s SoCal Showdown at Perris Auto Speedway was a tale of two ends – the scramble at the beginning and the pass at the end.

After a three lap scrum to start the feature, Kerry Madsen battled past Donny Schatz to take over the lead. It was then Joey Saldana who fought his way past Madsen. Ultimately though, the night belonged to Paul McMahan who got around Saldana on the second to last lap and took home his first World of Outlaws Sprint Car Series victory of the season.

“We qualified well and we were just trying things all night long and we just went back to normal,” McMahan said. “I tell you what, the car was phenomenal. I could run the top and bottom of one and two and three and four I was coming in around the top. It started taking a little rubber or cleaned off a lot and Joey just got held up with lapped traffic and I was able to get to him. And then got down in there and was able slide up in front of him. Going to victory lane – I’ll tell you it’s awesome to win here in Perris.”

McMahan’s win made him the ninth different winner of a World of Outlaws Sprint Car Series event so far this season. With 24 career wins, he is now just one win away from tying Bobby Allen for 17th on the all-time wins list.

The night was notable early on as the first time the series has used a new format for fields under 21 cars. After qualifying, there were two heat races with the winner and top qualifier in each transferring to the Dash. Then there were two qualifier races – the fields were set by Heat race finishing position – where the winner and top qualifier in each transferred to the Dash.

Donny Schatz won the Dash and led the field to the feature green flag. As the field entered turn one, Madsen dove in and slid Schatz onto the backstretch. Schatz drag raced Madsen to turn three and briefly retook the lead before Madsen got back around him. Madsen led one more lap before Saldana charged forward.

As they rounded turn four approaching the start finish line on lap three, Saldana went high onto the front straight and took over the lead. McMahan, meanwhile, battled from his fourth place starting position, around Madsen and Schatz to take over the second place position.

Saldana hit lapped traffic on lap seven, but continued to expand his lead through much of the 30-lap feature which went flag-to-flag without a caution. Schatz, who started the night on the pole, slipped back as far as sixth. The Tony Stewart/Curb-Agajanian Racing driver began to make his march back to the front on lap 23. He got around Brad Sweet, then Madsen and finally around Stewart, who sits second in the championship standings behind Schatz, to take over the third position.

In the waning laps, McMahan began to make his push forward and was able to close the gap as Saldana got bunched up in lapped traffic. As the two drivers rounded the track with two laps to go, McMahan was able to get a run on Saldana coming off of turn two and drag race past the Motter Motorsports No. 71m. Saldana tried to retake the position, but it was McMahan who crossed the finishline in first.

“That was my only shot,” McMahan said about the pass on Saldana. “I wasn’t going to be able to follow him around there and to be able to pass him – Joey was keeping up a pretty good pace there. The middle is kind of dirty and that’s what we were kind of banking on. I was able to get through there clean and slide up in front of him.”

Saldana and his Motter Motorsports team hosted Workshops for Warriors, a non-profit dedicated to training military veterans for manufacturing careers, on Saturday night at Perris. Saldana finished the night in second.

“It’s huge for us right now,” Saldana said. “I’ve been struggling so it’s nice to get a good result for our Workshop for Warriors tonight. We had a good car here.”

Schatz said his No. 15 Bad Boy Buggies car was good heading into the feature but took a while to get up to speed.

“We missed it a little bit,” Schatz said. “I was in the wrong part of the race track at all the right time so it’s just the way it goes. I made some mistakes tonight… but had we were able to get back going there at the end and had a shot just came up a little short.”

Two-time World of Outlaws Sprint Car Series champion Jason Meyers, who filled in through the final four races of the California stretch for an injured Jason Johnson, took home the KSE Racing Hard Charger Award after advancing four positions to finish in eighth.

The World of Outlaws Sprint Car Series heads east to take on the birthplace of the series, Devil’s Bowl Speedway in Mesquite, Texas, for the Texas Outlaw Nationals on April 24 and 25. Great seats still remain at the historic track and can be purchased by visiting http://www.WorldofOutlaws.com/Tickets or by calling 1-877-395-8606 . Purchase a 2-day ticket package by April 23 and receive a free fan pit pass.