Make It 11: Schatz Wins at Charlotte 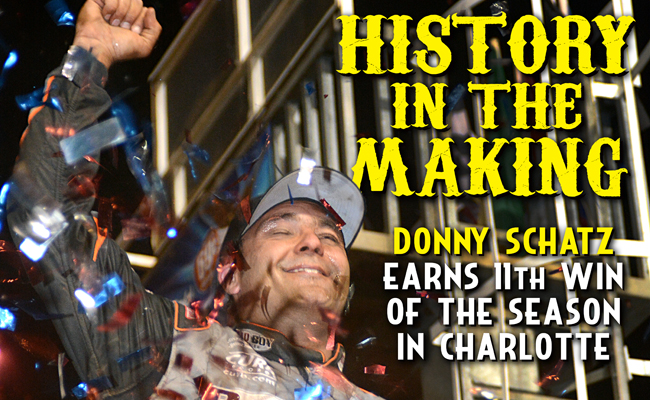 Make It 11: Donny Schatz Wins at The Dirt Track at Charlotte

CONCORD, N.C. – May 22, 2015 – The 2015 season is still young but Donny Schatz and his Tony Stewart/Curb-Agajanian Racing team have made a statement about their strength and intensity. The team has notched five of the last seven wins and at Friday night’s Circle K/NOS Energy Drink Outlaw Showdown at The Dirt Track at Charlotte, Schatz scored his 11th World of Outlaws Sprint Car Series victory of the season.

With 28 features now in the books, the Bad Boy Buggies team heads into the summer months with the momentum they need to try to make history.

“Keep in mind this Bad Boy Buggies team is unbelievable,” Schatz said. “What these guys do every night is awesome. The adjustments that they make, what they try to do for me is pretty crazy. I get to enjoy all the spoils but it’s really them that do all the hard work.”

Schatz started the feature on the pole, but it was Kraig Kinser who was the driver to beat out of the gate. Kinser led through the first 10 laps and on the restart on lap 11. The caution flag came out again the following lap and when the field returned to green, Schatz battled around Kinser to lead lap 13.

By lap 15 Schatz was running away from the field, closing on traffic in front of him. He hit the traffic two laps later and began working his way through. David Gravel got around Kinser to take over second as the field completed lap 16 and then set his sights on Schatz.

As the laps ticked down, Gravel began to catch Schatz. With three to go he had closed the gap significantly.

“I figured somebody had to be there,” Schatz said. “We got to traffic and there was guys running the bottom and guys ripping around the top and I just couldn’t seem to make anything happen. If you’re leading the race and you’re backpedaling, you ought to know somebody is coming. I just couldn’t find a spot to get through there…. Sometimes you win them that way, sometimes you lose them that way.”

As the two drivers raced down the back straight with two laps to go, Gravel got to Schatz’s back bumper bar, but Schatz blocked the line. Gravel kept the fight up but ultimately ran out of time as the checkered flag fell on the feature.

“We had a couple of shots at him,” Gravel said of Schatz. “I wish I maybe had five more laps and I could have maybe got him. Donny’s a smart racer, the best there is in the business and he doesn’t give wins away. I just needed him to slip up a little bit but he didn’t.”

For Gravel, the newly minted driver of the No. 7 Destiny Motorsports car, the second place finish was the best the team has had all season. Gravel said the key to the night was making it in to the Dash. If he can do that, Gravel said, there will be more podium finishes to come.

The battle for the final podium finish was one of the more fluid races of the night. Three different drivers held the third position – first the No. 7 of Gravel then Pittman and Kinser before Pittman reclaimed the spot.

From an injury and two missed races two months ago, Pittman now has back-to-back podium finishes with his No. 9 Great Clips team following his win at New Egypt Speedway.

“We’re going the right direction, that’s the most important thing,” Pittman said. “We’ve left a lot of nights scratching our heads going, ‘man, we’re a long ways off, how are we going to get better?’ We’ve got a great team and we’ll just keep plugging away and getting better. Our car was decent, we just got beat on some starts there. I was really good on the outside on all the restarts and on the inside I just kept losing spots. Not a bad night, not a great night. We’ve got some decent momentum going our way.”

Pittman scored his first quick time of the season earlier in the night. Jacob Allen was the KSE Racing Hard Charger recipient, advancing six positions to finish in 16th.

The World of Outlaws Sprint Car Series returns to action Monday night at Lawrenceburg (Ind.) Speedway. Great seats remain for the Memorial Day event. For more information on the event and to purchase tickets, visit http://woosprint.com/lawrenceburg-speedway.