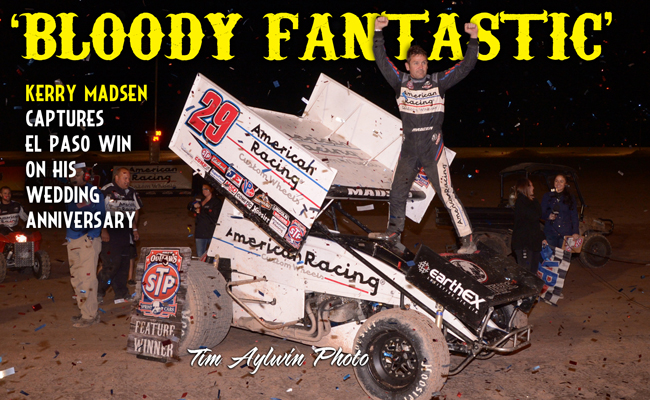 EL PASO, Texas — April 15, 2014 — It was Kerry Madsen’s night on Tuesday at El Paso Speedway Park as the Aussie held off charges by Steve Kinser, Daryn Pittman and Donny Schatz to earn his second World of Outlaws STP Sprint Car Series victory of the season, celebrating the win with his wife, Tina, on their 14th anniversary.

Kinser and Pittman would hang on to finish second and third with Brad Sweet and Sammy Swindell rounding out the top five in West Texas.

Madsen led the 30-lapper to green in the American Racing Custom Wheels Keneric Racing #29. From the pole position he charged to the lead and rode the highest part of the 3/8-mile oval and maintained his position.

“It feels bloody fantastic,” said Madsen, of St. Marys, N.S.W., Australia. “These races are so hard to win, and there are so many good cars and even though you’ve got a good starting position it really doesn’t mean anything. The track was fantastic because there were so many lines that it was actually confusing because you didn’t know which lines to pick. Every restart I couldn’t do what I did in three and four. Tina definitely brought a bit of luck and we’ll have to bring her to more races for sure.”

Schatz moved into third behind Jason Sides by going under Pittman in turns one and two. A caution flew on lap 13 when Jason Sides spun while running second. He recovered to eventually finish in the 12th.

Steve Kinser, who won last year at El Paso, made his presence known on the restart as he advanced from the fourth to second in the Bad Boy Buggies #11 of Tony Stewart Racing. Kinser snuck past Pittman and Schatz and followed Madsen into turn one. Caution flew again on lap 20, this time for 2013 top rookie David Gravel, who was running sixth at the time.

Then it got wild. On the ensuing restart, contact sent Schatz bouncing through turn four and eventually slowing to a stop, bringing out another caution and sending him from third to the tail of the field and leaving Kinser to try to chase down Madsen.

“We were running as good as we were,” said Kinser, the 20-time World of Outlaws STP Sprint Car Series champion from Bloomington, Ind. “If I hit two just right I could really get out of there, but I’d miss it more than I’d hit it. I could run a couple of different spots, the race track was really good. I thought it was a really great race track tonight.”

The final restart was single file with the battle for the final spot on the podium between Kasey Kahne Racing teammates Pittman and Sweet. Pittman started in third, but Sweet used a strong run coming off of turn four to get the position. On lap 27, Pittman and the Great Clips #9 went to the bottom of turn one to get back around Sweet for good.

“We just didn’t have it tonight, I don’t know if it was me or the car or what, but truthfully we just struggled after time trials,” said Pittman, of Owasso, Okla. “For us to come out of here with a third-place finish and the point lead on a night where I really feel like as a team, as a whole we struggled, I’ll take it. Top-three’s and top-five’s, that’s what’s going to pay off in November and we’ll take it.”

The World of Outlaws STP Sprint Car Series makes a long-awaited return to Devil’s Bowl Speedway in Mesquite, Texas, on Friday and Saturday, April 18-19 for the Texas Outlaw Nationals presented by American Racing Custom Wheels. Devil’s Bowl was the site of the inaugural World of Outlaws STP Sprint Car Series event in March of 1978 and played a key role in the history of the series in the 1980s and ’90s. Now the series returns for the first time since 2003.