Johnson King of the Mountain at El Paso 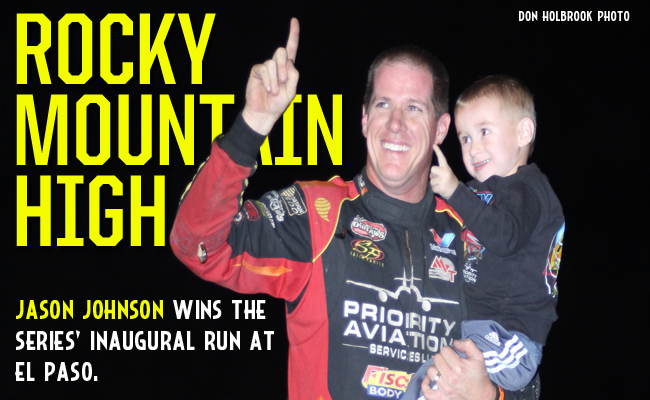 Johnson King of the Mountain at El Paso

In the series’ first stop in the state of Colorado since 2005, Johnson’s consistent performance landed him in the Craftsman Club® Dash. By virtue of the invert, Johnson’s No. 41 Jason Johnson Racing Maxim car led the six-car dash into the green flag; he did not forfeit his top-spot, which put him in the lead spot for the feature.

“I’m surrounded by a great group of guys…” said Johnson, beaming ear-to-ear. “…including Tim Engler. Because the altitude is so different here, we worked with Tim all last week preparing for tonight.  He definitely helped us out to get our Kistler engine running pretty good.”

In a 40-lap thriller that had the track’s record-breaking crowd on the edge of their seats, the 2015 World of Outlaws Kevin Gobrecht Rookie of the Year held his ground. But it was the unexpected that had the crowd in awe on the opening lap of the race. In a five caution showdown, the first caution included one of the series’ top juggernauts.

Defending Series Champion and current points leader Donny Schatz had a rare miscue barreling into turn four, overshooting the cushion. This set Schatz back. Schatz, who had 64 top ten finishes entering the day, was an outsider looking into the top ten at 15th place.

On the restart, Brad Sweet catapulted his No. 49 Kasey Kahne Racing GF1 racecar into second position from fourth. Sweet became the utmost threat for Johnson at this point in the race, as he began to chip away at Johnson’s lead. Like a teeter-totter, Johnson recovered his lead. He led by a 1.261-second margin 10 laps into the feature.

Sweet again charged ahead, diminishing Johnson’s lead to .657 seconds on lap 18. Schatz, who made his way to 12th, continued to rise up to seventh position before the race’s third caution. On the restart, the swiftness of Schatz’s No. 15 Tony Stewart/ Curb-Agajanian Racing J&J machine landed him a podium spot. While Schatz moved through the field, Johnson fended-off Sweet’s advances.

“I just stayed consistent and changed-up where I started,” Johnson said. “Brad was doing a hell of a job. Hats off to his race team. I saw Brad there the first restart in turns three and four, and he raced me clean. He’s a class-act. I can’t thank him enough. I want to thank the crowd. It’s nice to come to Colorado.”

With 15 laps remaining, 1.527 seconds separated Johnson from Sweet. Schatz, still gaining ground, was a within .400 seconds of Sweet. Though the race’s fourth caution regrouped the field – and more importantly the podium – the splits foreshadowed the impending battle between Sweet and Schatz.

“Jason always got a good run, and for the time we waited off turn two, with the angle of the track we just about ran into him,” Sweet said. “Then Donny snuck up on us at the end. We were just a little bit off. We didn’t know it was going to be this slick. [The track] slicked-off pretty early.”

Sweet and Schatz found themselves in a battle for the runner-up position. The two drag-raced side-by-side down the stretches of the quarter-mile oval, but it took Schatz seven more laps to get under Sweet. Schatz solidified second, while Johnson was on his way to a victory.

“I’m stuck in West Coast mode, I guess,” Schatz said. “I just made a mistake getting in there, and I’m lucky I didn’t go into the wall. I got back going, and it would have been nice to see that go without all the yellows. I started to pick them off pretty good. You make mistakes like that, and you get fired for mistakes like that. But, we got to rebound.”

Schatz, who cut Johnson’s lead from .665 seconds to .371 seconds in two laps, took a shot at the checkers. The fans cheered on the two 900-horsepower cars thundering down the front-stretch. But it was Johnson who got the best of Schatz. Sweet rounded-out the podium. Johnson was able to scale his car in victory lane with his son Jaxx, slapping a big smooch on the side of his face. The victory was Johnson’s third of the season.

“It’s fun to compete with the World of Outlaws and guys like Donny Schatz,” said Johnson. “The guys you look up to. It’s a great honor, and I want to thank you all for coming out.”

RACE NOTES:  Jason Johnson led every lap of the 40-lap feature Wednesday night, enjoying his third win of the season. The victory was Johnson’s 16th top-five performance of 2016. His last victory was on August 13 at the famed 5-hour ENERGY Knoxville Nationals, where he also survived a push by Schatz.