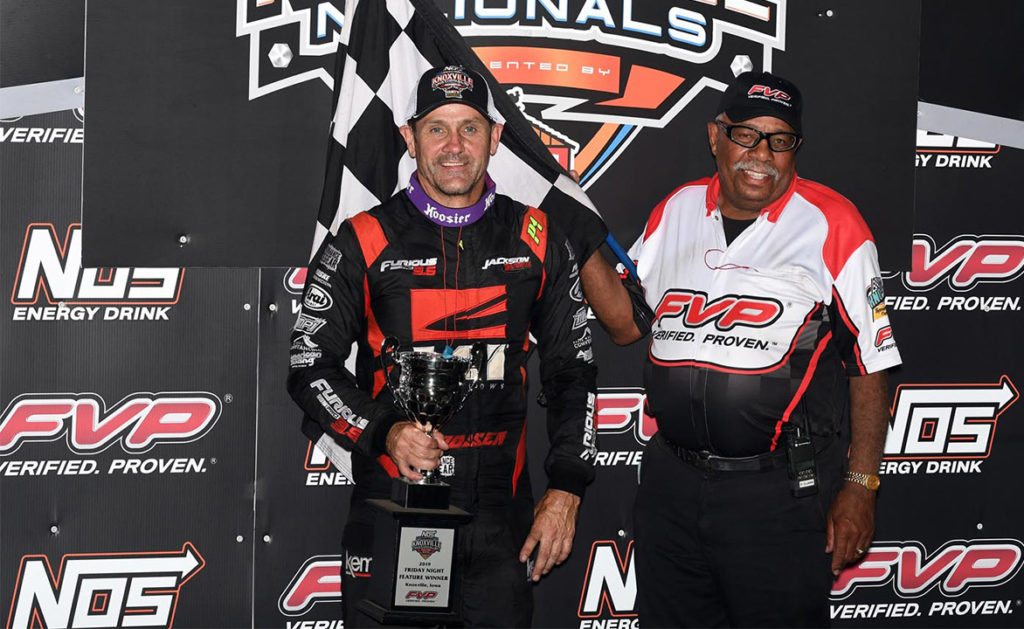 A demon was exorcised from Kerry Madsen Friday night.

His relaxed body posture and ability to smile wide proved it. The stress of not being locked in the NOS Energy Drink Knoxville Nationals that possessed him was gone.

“It’s a big relief I’ll tell you that,” Madsen said in Victory Lane. “Not putting her in the show (in the preliminary race) Wednesday night, we just didn’t have a great night. We didn’t perform and we didn’t execute. Come out tonight and the car was a rocket ship all night.”

While Madsen was the one that got to do the wing dance and wave the checkered flag Friday night, there were three other drivers in Victory Lane that shared his solace and big smile. Logan Schuchart, Shane Stewart and Dominic Scelzi also transferred to Saturday’s Feature – starting 22nd, 23rd and 24th, respectively – by finishing in the top four.

All four fought to make that happen.

The initial start of the 25-lap Feature was plagued by several cars stacking up on the backstretch – one flipping on its side – due to Brian Brown slowing from a broken part. When the race went back green Madsen held on to the cushion and used the momentum it gave him to accelerate to the lead. He then moved to the bottom and continued to put distance between he and second-place.

Behind him, the Drydene No. 1s of Schuchart rocketed from his eighth-place starting position to second in one lap using the high side of the half-mile track. Scelzi also charged from fifth to third, and Stewart fell to fifth.

However, two laps later Stewart moved into fourth and then began to hunt down Scelzi. He passed him for third eight laps into the Feature. About the same time, Schuchart caught Madsen and attempted a pass underneath him in turn one, but the Aussie switched lanes to the high side and began to pull away again.

“It was a bit confusing early of which line would be dominant,” Madsen said. “Watching the B-Main it was the bottom. So, I worked the bottom early. I heard him (Schuchart) up there and thought ‘Sweet, right, I can get to the top and go.’ So, that was nice.”

The top four then acted as an accordion throughout the Feature, closing the gap to each other then extending it. Scelzi passed Stewart for third in the closing laps, but Stewart took the position back the next corner.

Scelzi did the most battling of the night, having to fend of multiple attempts by drivers to steal the final transfer spot from him. Sammy Swindell pulled a slide job on the California driver to take fourth-place, but Scelzi didn’t let the veteran keep it for long. He quickly powered back by Swindell and held onto fourth-place for the remainder of the race. Austin McCarl and Spencer Bayston put pressure on him in the closing laps, though.

Stewart’s vision of starting up front for the Knoxville Nationals – one he saw possible after setting Quick Time during Thursday’s preliminary race – vanished on the first lap of his Heat race that night when he over shot the cushion and flipped, ending his night.

His vision of transferring into the Feature almost vanished with nine laps to go Friday night. A car spun directly in front of him, missing his KI Crossbows No. 5 car by inches when he drove by. And then with four laps to go, his car started to run out of fuel.

“We were completely out of gas coming across the checkered flag, so I wouldn’t have made it one last corner,” Stewart said. “Very fortunate. Happy that the CJB car is in the show.”

Schuchart’s second-place run was in a different car than the one he ran during his preliminary Qualifying race. He and his Shark Racing team switched from a new car to the one he finished second with at the Kings Royal.

To Schuchart, a chassis is a chassis. The new one didn’t work because of adjustments made to it. But he said he believes confidence is key. So, if the team felt more confident in going to the old car, that’s what they were going to do. It worked.

Madsen, the 2005 Knoxville Raceway track champion, found the right set up and cruised to the Hard Knox victory. He couldn’t wait for the race to be over, however, and the stress to be gone.

“I think all four of us during the last few laps there were looking going, ‘We don’t really care about winning, just let this thing end and the checkered come out,’” Madsen said. “I can’t tell you how relieving it is.”

Now their attention is turned to Saturday. The $150,000-to-win Knoxville Nationals. With it, a new kind of stress. How are they going to make their way from the rear to the front in the 50-lap race?

“Honestly, just going to push hard the whole way. We’re going to have to race hard for fifty (laps). There’s going to be no kind of strategy, patience or pace yourself. It’s going to be go hard.”

“I think we’ll keep it pretty similar for the start of the [Feature] tomorrow and have some things ready, our guys will be ready to change if we feel like we need to change it. I feel like we have a great car and I feel like and hope we’ll be able to race our way up there tomorrow.”

“It’s really two twenty-five lap Features. Starting in the back where we’re going to be, you can’t settle. You have to get after it and try to race as hard as you can all fifty laps and see how it all shakes out.

“We need to get a little bit more traction. I feel like Logan and the 2 was a little bit better than we were. The thing is there’s twenty-four good cars that’s going to be in that A-main and every spot is going to be a tough spot to get. Hopefully it works out.”

And for 24th-place starter Scelzi:

“I can’t go backwards,” Scelzi said. “We’re going to be plus positions regardless. Just got to be smart, race smart. And, in all honesty, my goal is a top-ten. I think it’s realistic. I think it’s possible. My goal is to stay on the lead lap for the first twenty-five (laps) and then the second twenty-five. Hopefully we’re around fifteenth, sixteenth and see what we can do.”

The World of Outlaws NOS Energy Drink Sprint Car Series on Saturday, Aug. 10, will return to Knoxville Raceway for the 59th annual NOS Energy Drink Knoxville Nationals presented by Casey’s General Stores. If you can’t be there, watch all of the action LIVE on DIRTVision.com.

Get tickets and more information.