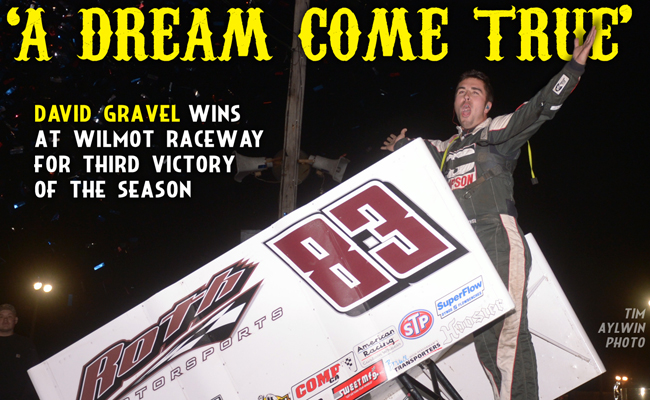 WILMOT, Wis. — May 9, 2014 — David Gravel is settling in nicely behind the wheel of the Roth Motorsports #83 car, winning a thriller on Friday night at Wilmot Raceway for his second victory in the past three World of Outlaws STP Sprint Car Series events.

Gravel, of Watertown, Conn., is now tied for the series lead with three victories this season after he held off a late charge by Joey Saldana, Paul McMahan and Brad Sweet at the 1/3-mile clay oval in southeastern Wisconsin.

As is often the case, this 30-lap feature came down to just a few split-second decisions. Gravel started on the pole for the second time this season, but it was Saldana on the outside who got the jump going into the first turn on the high side of the track. When Phil Mock spun to a stop in turn four with seven laps complete, the entire complexion of the race was about to change.

Saldana chose the outside lane on the double-file restart. It had worked for him only seven laps earlier, he expected it to work again. Gravel was to his inside with McMahan, Kraig Kinser and Steve Kinser breathing down their necks. Green waved and Saldana again rode the cushion, but this time Gravel found just enough speed on the bottom to slide up in front of Saldana and into the lead on lap eight.

When three cars tangled with 12 laps in the books for another caution, Gravel figured he better stay on the bottom, and he was right. Gravel raced back to the lead with Saldana and McMahan in tow, and Brad Sweet charging into fourth.

Gravel tried but he couldn’t completely escape Saldana and McMahan as they gave chase. Sweet joined the fray and with a couple laps to go the four cars raced nose-to-tail, waiting to see who might bobble.

But Gravel was solid in only his fourth start for Roth Motorsports. Saldana and McMahan gave it everything they had. A spinning car hampered McMahan’s momentum and allowed Sweet to pounce for a moment before McMahan went to the high side and charged back around. Saldana also went to the top in a last-lap shot at getting his car owner, Dan Motter, a special birthday victory.

It wasn’t to be, though, for Saldana or McMahan on this night. Gravel continues to prove he’ll be a force in the sport for a long time to come.

“It’s been a dream come true,” said the 21-year-old Gravel, who has driven for three different car owners this season on the World of Outlaws STP Sprint Car Series tour. “It’s just amazing. We’ve been so fast every time we’ve been on the track. We had a lot of adversity with things happening and motor trouble and all that. I wish I was in this car at the beginning of the year.”

Gravel, who also has wins this season at Merced (Calif.) Speedway and Eldora Speedway in Rossburg, Ohio, can empathize with Saldana on that crucial restart. Just last week at Eldora he was in a similar situation.

“It’s just one of those things, when you get put in those situations and start on the front row, you get used to it and try to treat it like any other start,” said Gravel, who dedicated the victory to his former car owner, Tom Leidig, who fell ill this past week. “Joey got the lead and at Eldora I lost the lead early, too. I’m sure Joey wishes he chose the bottom on that restart. Everything worked our way. I can’t believe how good we’re running this year.”

Saldana pushed forward in his Motter Equipment/HEMSaw car during the waning laps, but it wasn’t to be. His runner-up finish was enough, however, to catapult his team back into the championship lead for the second time this season.

“Hats off to the whole Roth team,” said Saldana, of Brownsburg, Ind. “They did an awesome job, they were good all night. I definitely chose the wrong line and paid the price for it. We got to lapped traffic and Paul showed me where I needed to be and I got moving around a lot better. I had a shot there, I just didn’t get it done.

“If it worked before you want to use it again and it just didn’t work. The biggest thing is the guys behind me are pretty smart racers, too, and when I saw Paul moving around there I knew I needed to start moving around. We were in the right spot, just didn’t get it done.”

McMahan had found a lane that was helping his CJB Motorsports car gain on Gravel and Saldana with about 10 laps to go. Then suddenly Paul Nienhiser’s spinning car blocked his path, yet the car kept running to avoid a caution. The damage had been done, though, for McMahan as that single moment broke his stride, allowing Sweet to close in for a shot at a podium finish. McMahan went high, Sweet went low and down the stretch it was McMahan regaining the momentum he needed to hold the third spot.

“We were pretty good, we just got cars spinning out and doing 360s, it cost me a lot,” said McMahan, of Nashville, Tenn. “I lost a lot of ground to Joey and David there. We had a pretty good race car. I was racing with Joe and he was running the bottom so I had to move up and that opened the bottom for Brad. He gave me a big flyer at the end, but I was able to keep up on the top and just barely beat him to the finish line.”

Gravel’s three victories ties him with Sweet, Donny Schatz and Daryn Pittman for the most wins by any single driver so far this season.

The World of Outlaws STP Sprint Car Series is back in action on Saturday at Tri-State Speedway in Haubstadt, Ind., before the series invades Pennsylvania next week on Wednesday at Lincoln Speedway then Friday and Saturday at Williams Grove Speedway.