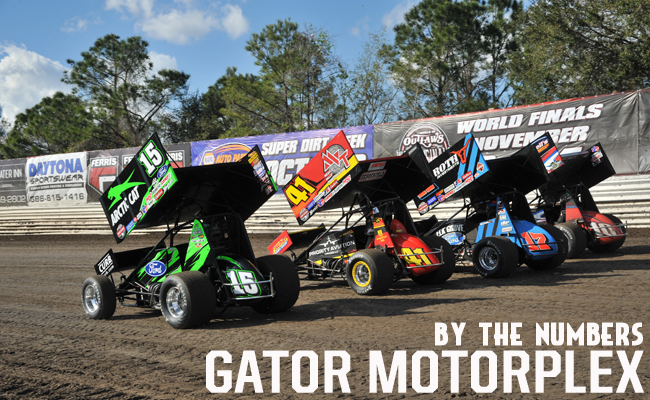 By the Numbers: World of Outlaws at Gator Motorplex in Texas

WILIS, TX — April 6, 2017 — The inaugural Gator Outlaw Bash, featuring the World of Outlaws Craftsman Sprint Car Series and Southern United Sprints, hits the track next week on Thursday, April 13 at Gator Motorplex in Willis, Texas. The event was originally scheduled for March 4 but was postponed by inclement weather. All tickets from March 4 will be honored on April 13.

The series is finishing up their first West Coast Swing of the season before heading to the Lone Star state. Donny Schatz, the eighth-time and defending series champion has set a torrid pace to begin the season, winning six of the first 12 races and is the current point leader. David Gravel, who is currently second in points, has three wins, while Jason Johnson, Brad Sweet and Logan Schuchart have each been victorious once. This edition of By the Numbers sets the stage for the Gator Outlaw Bash at Gator Motorplex on Thursday, April 13.

By the Numbers: Gator Motorplex

Tickets for the inaugural Gator Outlaw Bash, featuring the World of Outlaws Craftsman Sprint Car Series and Southern United Sprints at Gator Motorplex in Willis, Texas, the Gator Bash on Thursday, April 13 can be purchased online or by calling SLS Promotions at 815-344-2023 and at the track on race day. All tickets from the originally scheduled event on March 4 will be honored.