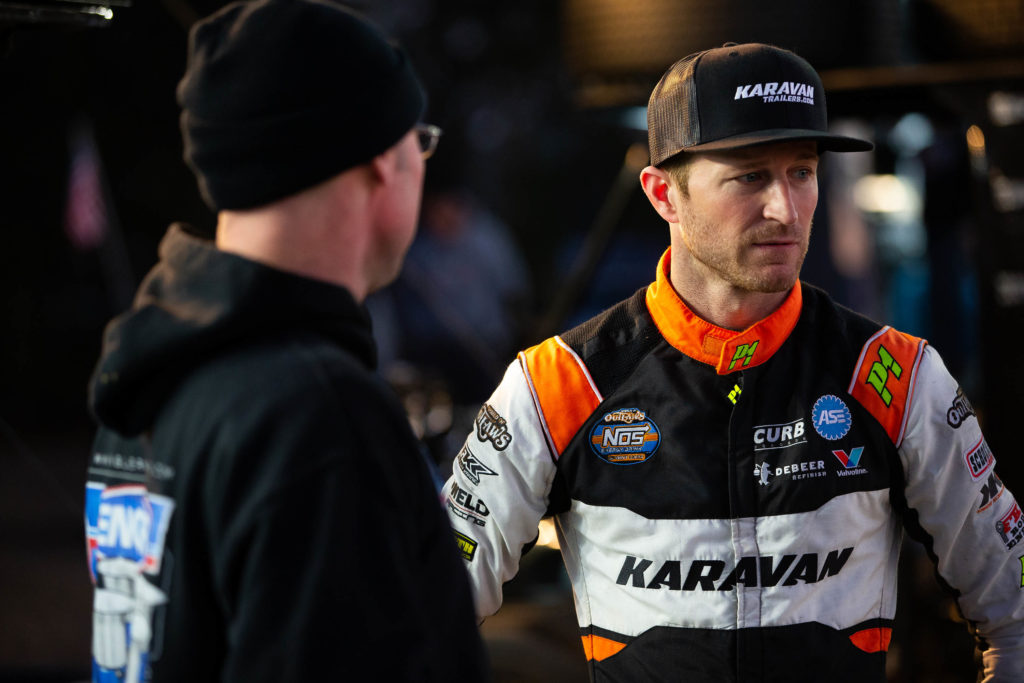 Kasey Kahne Racing is a steamroller. For a third straight season, this battalion from Mooresville, North Carolina, has flattened all title opposition. In its 18-year existence, KKR has collected 206 World of Outlaws Feature victories with reigning king Brad Sweet (74), Joey Saldana (67), first champ Daryn Pittman (47), Cody Darrah (6), Paul McMahan (5) and Craig Dollansky (3) plus three by the top rookie of 2021, Australia’s James McFadden. KKR kept three teams on the road for two years, put an unprecedented five cars into the 2011 Brad Doty Classic, and swept Calistoga’s entire podium in 2014. The racing CEO from sleepy Enumclaw, WA is one mighty machine.

Short tracks have long labored in Big Money’s shadow. Two decades ago, NASCAR expansion created dirt tracks in Las Vegas, Charlotte and Fort Worth, but it was difficult to watch Dave Blaney “start and park” after being a proud Outlaw champion. Everyone likes money. Everyone dreams of a bigger stage. We want Sprint Car heroes to realize those dreams. Then we want them to give back. Blaney turned Sharon Speedway into a showplace. Tony Stewart purchased Eldora Speedway after NASCAR prosperity allowed sprints, midgets, champ cars and late models.

Tony Stewart Motorsports was the template that Kasey Kahne Racing aspired to. Both drivers came to NASCAR as USAC champions five years apart. Both spent early NASCAR paychecks on USAC teams. The ink was barely dry on Kasey’s first contract with Ray Evernham before Kahne had unleashed Tyler Walker on the 2004 Silver Crown circuit, winning on Nazareth tar, Tulsa sand, and DuQuoin dirt. Later when Walker seemed to deflect every helping hand, Kasey stood by him with a loyalty rarely seen in corporate raiders. Cody Darrah and Paul McMahan would further illustrate Kahne’s devotion. Walker was joined in 2005 KKR champ cars by Erin Crocker, Kraig Kinser, Jesse Hockett, Bud Kaeding, and Kahne himself at IRP’s Brickyard 100.

Number Nine first hit the World of Outlaws in April of 2005 with Hockett at Muskogee, OK. Jeff Shepard was next. In six features, neither cracked the Top 10 finishers. Undeterred, Kahne went after the 2006 title with Saldana, who won six A-mains that included the Kings Royal $50k. Joey took twice as many in 2007 highlighted by a Gold Cup that also paid $50k.

Saldana was riding high. His family was minutes away from Kasey Kahne Racing’s first shop in suburban Indianapolis. One side was reserved for USAC sprints and midgets that Kevin Swindell and Brady Bacon raced on dirt and asphalt. Due to USAC’s rule restricting young drivers to tracks shorter than one mile (or so) Bacon could not compete at Iowa Speedway so Kahne called Walker, who started last yet netted the team’s only USAC sprint win of 2007. Kevin’s midgets won on Lawrenceburg clay and “The Night Before The 500” on IRP asphalt.

USAC sprints and midgets were the vehicles that brought Brad Sweet to Kasey Kahne Racing at Manzanita and Turkey Night 2007. The ensuing summer found Sweet snaring six USAC midget wins at Knoxville, Granite City, Lawrenceburg and Belleville Nationals. On the wing side, Saldana won five Outlaw races topped by $25k at Skagit Speedway, the place where Kahne learned to race. Joey won 21 times in 2009 highlighted by a second Gold Cup worth 50k. Kahne paired him with Craig Dollansky but Craig did not win for six months. When the 2009 tour reached the World Finals, Saldana’s teammates were Sweet and Cody Darrah.

Darrah seemed destined for stardom, leaping from Central PA to the 2010 World of Outlaws trail, but that ended before it started due to a Daytona street collision that shattered leg and knee. McMahan was hired as Cody’s replacement and won only once. Yet when Darrah healed, Kasey did not punt Paul to the curb but instead combined with Dennis Roth to field a third team.

Budweiser bucks enabled Kasey Kahne to promote four races within the 2010 World of Outlaws calendar. The first happened at Volunteer Speedway just down I-75 from NASCAR weekend at Bristol. The second leg in Sedalia saw Kasey race a fourth KKR sprint car. And the mini-series wrapped at La Salle, IL in one of Joey’s 13 wins, richest being $25k from the Don Martin Memorial. Saldana’s brutal crash at Eldora ended any title shot. Sweet had seven USAC midget wins at Manzanita, Tucson, Salem, Lincoln Park, Sun Prairie and Eldora, where he was poised for another when Joey crashed. Kasey parked the midget and told Sweet to keep Saldana’s seat warm.

Many mechanics have worn Kahne colors beginning with brothers Kale and Kole and cousin Willis to luminaries like Paul Silva and Rick Warner. KKR brought NASCAR secrecy to Sprint Cars, striving to control every aspect in-house. Willie was soon building shock absorbers in what became Factory Kahne. It also led Willie to tell Kasey to fire Warner for leaking information. Ricky moved to Tony Stewart and shaped Donny Schatz into Kahne’s biggest adversary. Not until Kasey lured Warner’s protege Eric Prutzman did the scales tip from Brownsburg to Mooresville.

There were four KKR machines among the Top 12 of the 2011 World of Outlaws opener at Volusia driven by Saldana, McMahan, Sweet and Darrah. Kasey was lifting Brad into NASCAR in 2011 when the regular trio totaled 11 wins in seven states and two Canadian provinces. Paul produced four and Cody enjoyed Edmonton, AB. Saldana won five times in 2012 including Charlotte when KKR swept four of the Top Seven spots. June 8, 2012, at Clay County, Iowa marked the first World of Outlaws victory by Brad Sweet. When the World Finals began, Brad was at Texas Motor Speedway so the third KKR car was steered by Daryn Pittman.

After seven seasons, Saldana parted from KKR. In his first race as Joey’s replacement, Daryn was victorious at Volusia. He added seven more and Kahne’s first championship on any level. Schatz won almost three times as often yet Pittman maximized track records, which led to qualifying points. KKR’s biggest win of 2013 came not from Pittman nor Darrah but from Sweet’s Kings Royal, but Brad was in Phoenix instead of the World Finals when KKR’s third chair contained Jason Meyers. KKR won 21 Outlaw races in 2014 with Pittman (14), Sweet (5) and Darrah. Daryn won four straight through New York.

Darrah seemed grateful for the golden opportunity. There were good nights when Cody won at Williams Grove in 2012, Grand Forks and Drummond in 2013, and Hanford and Lernerville in 2014. But there were hundreds of races that provoked more questions than answers. Upon departing KKR, Cody raced one more year then retired at age 27.

Pittman and Sweet each won five times in 2015. Brad and Daryn crossed first and second at Port Royal at the end of 2015 then duplicated the order in the 2016 Volusia opener. They each won eight events in 2016 and swept first and second four more times. Sweet won five features in 2017 to Pittman’s three. One was in Stockton when James McFadden first raced for Willie Kahne. Brad and Daryn each won nine races in 2018 topped by Sweet’s joyous Knoxville Nationals. Daryn, Brad and Kasey were half of the Top Six drivers at the Devil’s Bowl.

Daryn departed after six seasons and Brad was the beneficiary, winning 16 races and his first crown. He won $41k at Jackson, MN and carted $175k from Eldora. McFadden supplemented KKR at both events. Brad and James finished first and second at Volusia to begin 2020. They did it again at Lake Ozark’s Jason Johnson 41 with the Aussie on top. This year, KKR captured 15 wins and a third title with Sweet plus McFadden’s two victories.

Kahne’s final victory after 16 seasons in NASCAR was the 2017 Brickyard 400. Television watchers might not know there is life after NASCAR. Kahne, Stewart, Blaney and Ken Schrader all increased their total races just as soon as they left The Chase in their rearview mirrors.