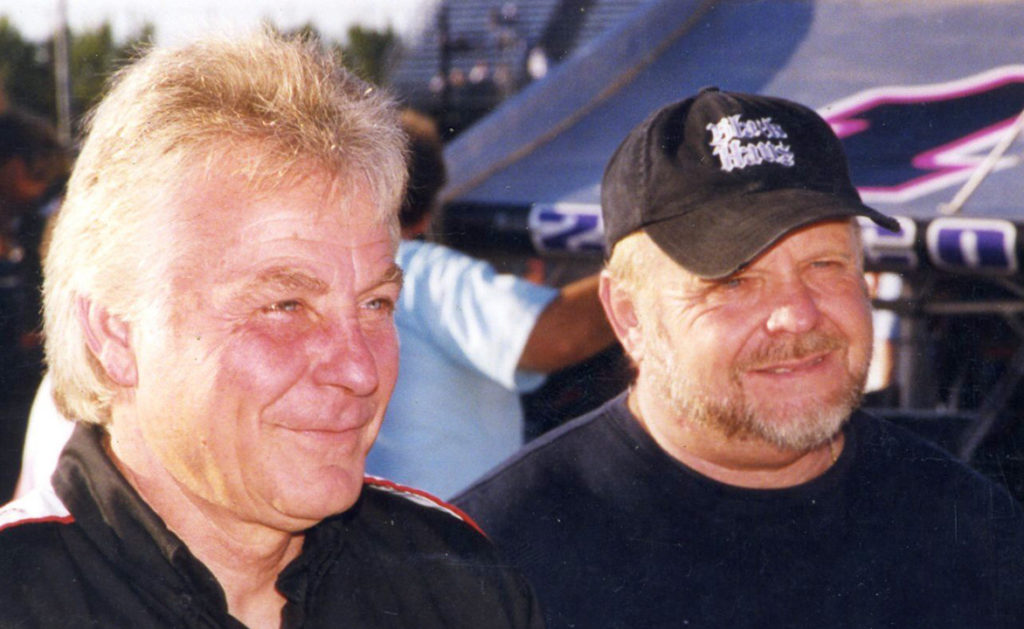 They came from South Florida and West Texas. They established Central Pennsylvania as a professional honey pot, raided Ohio often and placed all of America behind the curve on Sprint Car technology. They launched the All Star Circuit of Champions in 1970 then pestered a Wisconsin salesman to start the World of Outlaws in 1978. They are “The Hanover Gang” of Bobby Allen.

Father, grandfather, driver, car builder, car owner, crew chief Bobby Allen has had a plaque in the National Sprint Car Hall of Fame since 1998, his final season in the saddle. Today he is Shark Racing supervisor to Logan Schuchart and Jacob Allen as three generations travel the Outlaw trail that Bob pioneered.

I-95 was the first highway on Bobby Allen’s epic career in 1966 when it carried his hardtop Supermodified from Miami to Baltimore, then 55 miles to “The Fabulous Lincoln Speedway” as decreed by its creator, Hillen Rife. Fire and brimstone “Hilly” took a shine to the teenage karting king, providing odd jobs, crude lodging, and a few bucks to appear at tracks like Lincoln, Dorsey, Bedford or Susquehanna (today known as BAPS) when Rife ran things. Allen landed a local ride and was encouraged by Hilly to summon Steve Smith and Richard Lupo from South Beach. Smith would win 150 times at Lincoln alone.

The Hanover Gang remained “Miami Vice” until 1971 when Texas brothers Dub and Van May followed Allen home. Dub and Lupo were Bob Weikert’s first drivers. Van convinced Steve Siegel, who coaxed George Bischoff out of New Mexico. Allen brothers Tommy and Joey journeyed north. Locals like Steve Stambaugh and Tom Sanders studied at Bob’s blockhouse and became drivers and better-paid mechanics. Allen brought Stambaugh and Lupo to Texas in 1984 as the first three-car effort in Outlaw history. Steve Smith’s son Stevie scored more Outlaw wins than all but nine guys. Ten miles from Hanover on Hunterstown, karts was how Stevie started as did Kevin Gobrecht and Logan Schuchart. Kevin died with the World of Outlaws in 1999 and is remembered each year as the namesake for the Series’ top rookie award. Bob placed grandson Logan on tour in 2014. Six seasons later, Schuchart and Shark nearly stole the belt.

Standing up to invading forces has been a hallmark in Hanover, a town claimed by both Pennsylvania and Maryland until Mason and Dixon drew the border in 1767. Gettysburg is infamous as the bloodiest Civil War battlefield. When that smoke cleared in 1865, President Abraham Lincoln delivered his Gettysburg Address. As a result, businesses adopted Abe’s name along Route 30 or Lincoln Highway. Lincoln Speedway joined the list in 1953.

As an early partner to Bill France, Hilly brought NASCAR stars Junior Johnson and Fireball Roberts to the Pigeon Hills. For a year of Saturdays, Rife even arranged for Allen and Steve Smith and Kenny Weld to earn NASCAR points. Weld and car dealer Tom Livelsberger purchased Lincoln in 1975. Two years later, they leased the track to Ted Johnson for two nights. Ted was then struck with the idea of the century, a World of Outlaws. Lincoln Speedway was the club’s ninth stop ever.

Lincoln listed its address as Hanover then New Oxford and now Abbottstown. Allen called McSherrystown home for a spell. Lupo had Hampton and East Berlin as a residence. All are a turkey shoot from Hanover’s happy hunting ground. Shark Racing is 25 miles from “The Grove,” 27 from Susquehanna, 58 from Hagerstown, 62 from Port Royal, and 83 miles from Selinsgrove.

Southern California’s Jim Edwards arrived in New Oxford in 1972 and stayed for nine summers. “Gentleman Jim” landed some quality rides: Walt Dyer 461, Charlie Lloyd 56, Bob Weikert 29. But it was George Moskat’s “Big Block” Buckley that brought Edwards his only Series win in the second half of the first Syracuse Super Nationals of 1978. Against the true tour, Jim peaked second at Lincoln in the Bob Benchoff Stanton. Edwards moved to the desert to stack titles with the Sprint Car Owners of Arizona while selling Total Seal Piston Rings.

George Bischoff from Las Cruces joined Siegel in 1978. George stayed two summers then shifted to the Quaker State’s northwest corner. Leeper was home in 1983 when Bischoff placed third at East Bay and fifth at Syracuse. Siegel flew to Los Angeles in 1987 to place second at Ascot Park. Two years later when the United Sprint Association split ranks, Steve saw 1989 as the year to try the whole tour. Siegel repeated second-place at Lincoln and 10th in points sponsored by National Cold Storage.

Lupo was languishing through an average career until Allen added a red “Bushwacker” with Hoff Insurance sponsorship. Richard racked up three straight wins at Lincoln. Bob briefly added a third car for Stambaugh and in his first look at Houston’s Big H Motor Speedway, Steve qualified fastest. After it was sold, Stambaugh became the first to drive an Apple Chevrolet 12.

Hanover is 10 miles from Maryland, which sent Bobby Fletcher, Cris Eash and Jeff Shepard across its border each Saturday to circle Lincoln Speedway. Fletcher’s father Harry was a winner with Johnny Grum and Steve Smith before commissioning Allen to build cars. Bobby Fletcher won twice at Lincoln and posted his Outlaw best of sixth. Allen was behind on building cars as early as 1972 when Jan Opperman’s orange crate was late.

Over in New Oxford, Steve Smith assembled cars that defeated Outlaws four times in four Lincoln starts in 1978. The last one was the stuff of legend. “The Black Bandit” blew up with no time to swap engines, started last in the car he built for Ken Slaybaugh, and smoked Hall of Fame talent with no wings. Two of The Bandit’s pupils were Moon Byers and Dennis Kohler, rookies to the 1987 Outlaw trail with Darren Eash’s little brother. Cris Eash did four tours as an adopted Hanover Gang member. Byers joined Stevie Smith and Al Hamilton while Kohler became Karl Kinser’s apprentice. Moon added more Outlaw accolades with Lance Dewease, Greg Hodnett, Jason Johnson, Fred Rahmer and sons.

The Outlaws rekindle their rivalry with the PA Posse this week, starting Wednesday, May 12, at Lincoln Speedway. Then, they’ll return to “The Grove” Friday and Saturday, May 14-15, for the Morgan Cup. Go to WorldofOutlaws.com/tix to get your tickets for both events.

If you can’t make it to the track, you can watch both events live on DIRTVision.