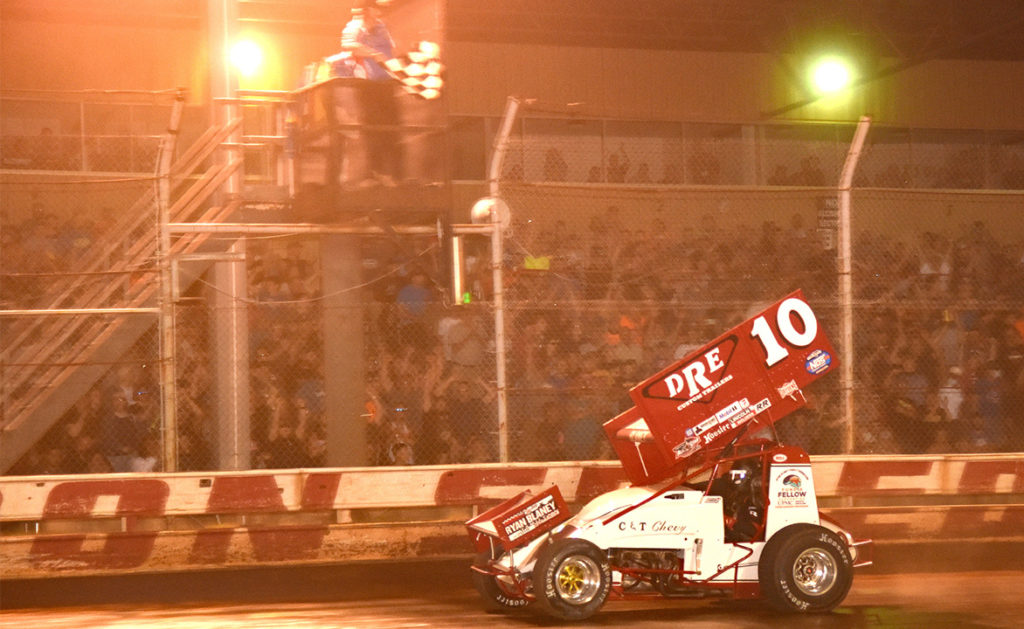 Dave Blaney is 58 years young. He spent his first 35 years as a resident of Hartford, OH and the last 23 in High Point, NC. He’s been married to Lisa for 32 years and the couple are parents to Emma, Erin and Ryan Blaney, who signed a NASCAR contract with Roger Penske at age 18. Dad could follow Ryan around in a luxury coach befitting a king. He could cast a fishing line. Blaneys, however, do not go quietly into the night. His idea of relaxation is to hold 900hp one foot from a concrete wall at 120mph.

Saturday’s stirring news of Dave Blaney’s first World of Outlaws victory in 24 years was inspirational. Blaney built the winning car, dressed it to look like his father’s famous #10, and parked it on the front stretch of the Sharon Speedway he’s owned for 19 years across from the former Blaney Lumber mill. Saturday at Sharon was stunning. But under further analysis, should it have been?

Lou Blaney and sons Dave and Dale have been making auto racing look easy for six decades. All three are in the National Sprint Car Hall of Fame; Lou also immortalized as a modified legend in Weedsport, NY. Dad dominated Fridays at Lernerville, Saturdays at Mercer, and Sundays at Tri-City, PA often sweeping Sprint and Mod mains on the same card. Dale dropped NBA hoop dreams for Sharon Sprint Cars and needed no more than 10 starts to win. Oddly, his older brother toiled for a year until Dave ultimately cracked the win circle at Mercer on June 27, 1982.

Skill behind the steering wheel seemed almost instinctive. After two full seasons in Sprint Cars, Dave Blaney was chosen to chauffeur the USAC Champ Car of Ralph DePalma. In their first 100-miler, Blaney and Radio Hospital crossed second at Springfield to Chuck Gurney’s potent Plastic Express. In his first race on asphalt, Dave did 200 laps on the Minnesota State Fairgrounds better than all but Michigan pavement pro Marvin Carman. Rookie of the Year would have been nice. Blaney insisted on the 1984 crown, which was his when rain removed Eldora’s season finale. Not yet 21, Dave was too young for champagne. Once he joined the World of Outlaws, USAC appearances were scarce, though Blaney made sporadic starts in Tampa, Phoenix and Indianapolis Raceway Park. He never could quite seal the deal in Silver Crown, settling for second at West Virginia with Mike Gurtizen and again at the 1987 Hoosier Hundred for Allan Nott after their track record of 113mph.

Sprint Cars without wings presented no lingering mysteries after the televised Eldora disaster that was Dave’s debut. Once he hired on with Arizona maestro Gary Stanton, Blaney became comfortable backing into the flat foggy corners of Ascot Park, where Dave finished fourth in his first Pacific Coast Nationals and so impressed the Agajanian family that they brought Blaney back to their track to drive their car in the Don Peabody Classic that closed Ascot’s 1985 Sprint Car season. At the end of ’86, Dave and Gary came within one lap and one Rich Vogler surge from winning the Four Crown Nationals. As with Champ Cars, Blaney fell just short of winning with USAC or CRA.

It was not until the 1993 Chili Bowl Midget Nationals that Dave Blaney won without wings. But that indoor Oklahoma classic quieted any questions. No midget experience? No problem. Ralph Potter & Sons kept Dave calm even when their snappy V-6 put its pilot on one, two or three wheels. In their 25-lap debut, Dave won. In the 50-lap Tulsa finale, Blaney won again.

As quickly as he excelled on USAC pavement, Dave dominated Charlotte County during the brief Outlaw experiment with the asphalt arts. Throttle-happy dirt trackers burned rubber like school kids on cruise night. Low-budgeted boys did not wait long for top teams to sell discount scuffs. Piles of pungent tires filled the Florida pit. Yet there was Dave Blaney, straight as a string and straight to Victory Lane. After a 20-lap clinic, his Goodyear was so good that Blaney used it again to win the next night’s 30-lapper.

It was the Casey Luna Ford maintained by Ken Woodruff that propelled Blaney to the 1995 Outlaw championship. In that era without weight limits, the heavy Ford seldom qualified quickest. To watch Dave slice forward from rows six or seven was pure poetry; no wasted motion, no wheel spin. He played opponents like a point guard, faking one way then driving another, always looking far ahead. As soon as he advanced a position, he immediately pounced on the next guy. Ready to rip the cushion or pedal the bottom, Blaney was difficult to defend.

Syracuse was the center of the DIRT Modified universe. Its century-old dirt track was “The Moody Mile” due to its tendency to grind cars and engines to shrapnel. The backstretch was a bitch; barely two cars wide. No one knew much about turbulence when dirty air caused Sprint Cars to wander. Dave won the Syracuse Super Nationals twice. Outlaws were often quick to exit Super DIRT Week, but Blaney always lingered, first to crew for dad and then to drive 125 miles tethered to a Modified radio. Three times in seven years, Dave settled for second in that elusive event. Another autumn, the culprit was a broken bolt that allowed a radius rod to drop with mere miles to victory. Syracuse would have been sweet because Lou Blaney had tried to win there since 1981.

Sprints, Midgets, Champ Cars, Modifieds, dirt or asphalt, Dave Blaney was good at everything. Then he left for NASCAR. Those in the garage knew Dave was fast with fenders and spotters even if he never did win at the premier Cup level. Atlanta always seemed to be his best shot, but bad pit stops soured the result. Today’s generation might best remember Blaney as the guy who would have been declared winner of the 2012 Daytona 500 had Juan Montoya’s dryer fire melted more of the fence. At the end of his Cup career, Dave had devolved into “start and park” Cup paychecks, swallowing pride to further Ryan’s career. Now that their kid is employed by arguably the greatest car owner in motorsport history, Dave and Lisa Blaney can lean back and grin.

Blaney Lumber just keeps bringing the wood. In the last five Outlaw seasons, Dave displayed flashes of his championship self. He finished fourth at Charlotte for Al Heinke in 2019, fourth at Eldora for Pete Grove in 2018, and third at the World Finals of 2017 driving the Dan Motter 71m. Saturday at Sharon when ol’ #10 parked in Victory Lane, everyone seemed surprised except Dave Blaney, who calmly sank the free throw offered by Sheldon Haudenschild.