At A Glance: Outlaws Ready to Wave Green Flag 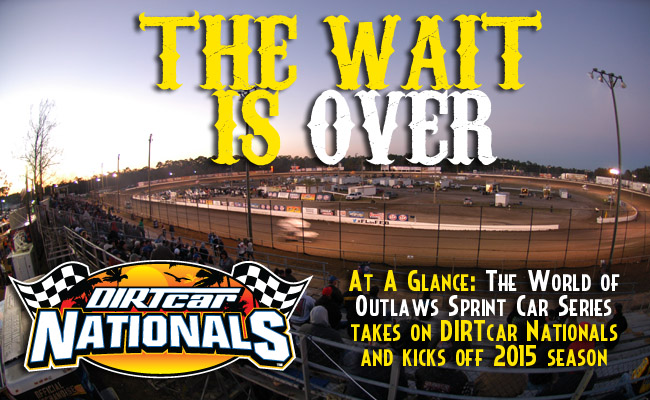 CONCORD, N.C. – Feb. 5, 2015 – The brief respite from winter provided by a trip to Florida in February signals the start of the World of Outlaws Sprint Car Series season and the annual DIRTcar Nationals at Volusia Speedway Park. Less than a week remains before the beginning of sprint car week at the DIRTcar Nationals, Feb. 11 to 15, featuring the World of Outlaws and the UNOH All Star Circuit of Champions.

It was just three and a half months ago the series’ season drew to a close bringing to an end a historic year that saw Donny Schatz capture 26 wins and score more points than any other driver in series history on the way to his sixth championship.

With the off-season now at its end, the question of who will take home the 2015 DIRTcar Nationals title and coveted “Big Gator” trophy will soon be answered.

Volusia Speedway Park has played host to the season opening DIRTcar Nationals since 2005 and has seen thrilling finishes from The Greatest Show on Dirt. Schatz is the winningest driver at the track with six victories. Doug Wolfgang won the first ever World of Outlaws event at Volusia in 1981.

The action in Florida begins on Wednesday, Feb. 11, when the All Star Circuit of Champions takes on the half-mile oval. The World of Outlaws Sprint Car Series then takes up its first night of racing on Friday, Feb. 13. The Outlaws wrap-up sprint week with two more nights of racing on Saturday, Feb. 14, and Sunday, Feb. 15.

Great tickets for DIRTcar Nationals are still available at http://www.WorldofOutlaws.com/Tickets or by calling 1-877-395-8606.

ABOUT THE TRACK
Volusia Speedway Park is a semi-banked, half-mile oval with 75-foot wide straightaways and 75-foot wide turns. The track record of 12.569 seconds was established by Paul McMahan on February 10, 2011. For more information, visit http://www.DIRTcarNationals.com.

WATCH ON DIRTVISION: Fans can watch and listen live to all the action from DIRTcar Nationals at Volusia Speedway Park on http://www.DIRTVision.com.

UP NEXT: The World of Outlaws Sprint Car Series heads west to the Dirt Track at Las Vegas for the FVP Outlaw Showdown on March 4 and 5 followed on March 7 by the NAPA Auto Parts Wildcat Shootout presented by RideNow Powersports in Tucson, Ariz. The event begins the series’ western swing that will go through late April.