At A Glance: KKR Looks for Calistoga Magic 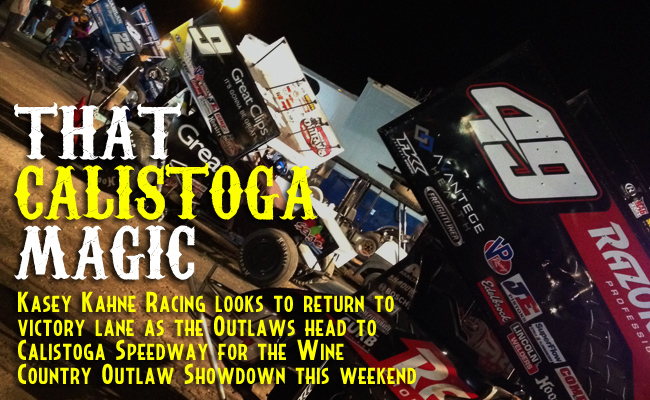 The World of Outlaws Sprint Car Series takes on the Wine Country Outlaw Showdown on April 11 and 12; takes on Placerville tonight

CONCORD, N.C. – April 7, 2015 – The World of Outlaws Sprint Car Series and the King of the West Series return to Calistoga (Calif.) Speedway this weekend for the Wine Country Outlaw Showdown with one team looking to repeat its magic from 2014.

Last year, Kasey Kahne Racing with Mike Curb took home wins on both nights at the semi-banked, half-mile oval. Brad Sweet held off Brian Brown on the first night while Daryn Pittman kept his KKR teammates at bay to win on night two. To cap off an already stellar weekend, the team swept all three podium positions on the second night.

Pittman comes into the Wine Country Outlaw Showdown this season after winning the 2015 sprint week championship at DIRTcar Nationals and scoring his second victory a week and a half ago at Antioch (Calif.) Speedway. He is one of just three drivers so far this season to have multiple wins. His KKR teammate, Sweet, has one win on the season at Volusia Speedway Park and sits third in the championship standings, just 13 points out of the lead.

ABOUT THE TRACK
CALISTOGA SPEEDWAY is a semi-banked, half-mile oval. The track record of 15.731 seconds was established by Joey Saldana on April 5, 2014. For more event information, visit http://woosprint.com/calistoga-speedway.

LISTEN LIVE: Listen live for FREE to the World of Outlaws Sprint Car Series at Calistoga Speedway on http://www.DIRTVision.com.

UP NEXT: The World of Outlaws Sprint Car Series wraps up its spring California run with two final stops at Hanford Speedway on Friday, April 17 and Perris Auto Speedway on Saturday, April 18.