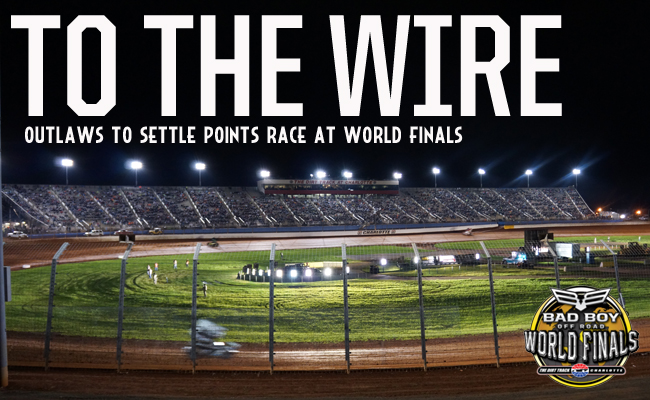 At A Glance: Bad Boy Off Road World of Outlaws World Finals

Nearly 200 entries among the three premier World Racing Groups divisions are expected. Top drivers such as Donny Schatz, Daryn Pittman, Josh Richards, Shane Clanton, Matt Sheppard, Brett Hearn, Stewart Friesen and many, many more all look to add their names to the Bad Boy Off Road World of Outlaws World Finals trophies. The opportunity to gain bragging rights from winning one of the largest dirt events in the world is not the only challenge of the weekend. There are a number of championship point standings battles up for grabs as the season comes to a close this weekend at The Dirt Track at Charlotte.

Can Josh Richards re-write the record books by claiming the most single-season wins? Richards is sitting on win number 17. Gaining a win at the World Finals will eclipse the single-season win record by Darrell Lanigan set back in 2014. With Richards’ early untouchable 2016 World of Outlaws Craftsman Late Model Series season, he all but has the championship wrapped up. Simply showing up to each day of the Bad Boy Off Road World of Outlaws World Finals will make it impossible for his nearest competitor to overtake him for the championship.

Points positions six through 10, however, are looking at a tight battle ahead. Steve Casebolt, Chub Frank, Brian Shirley, Frank Heckenast Jr., and Eric Wells are all separated by just 46 points. Each position could mean a big difference in the end-of-year Point Fund Awards.

The World of Outlaws Craftsman Sprint Car Series has the closest points battle coming into the Bad Boy Off Road World of Outlaws World Finals. Donny Schatz has had another record-breaking year, putting in his grasp a third-straight, eighth-overall championship. However, positions two, three and four are up for grabs. Daryn Pittman, David Gravel and Brad Sweet are currently second through fourth in points respectively. Only 11 points separate the three drivers.

Joey Saldana is looking for his next win in order to cement his name in the history books. One more win will send him into an elite club of 100-plus career wins. He will join Steve Kinser, Sammy Swindell, Donny Schatz, Mark Kinser and Doug Wolfgang as the only drivers to win 100 races or more.

With Bad Boy Off Road World of Outlaws World Finals upon us, the stars of the Big-Block Modifieds from the Super DIRTcar Series will make the trek south to compete in front of thousands of fans. Matt Sheppard, driver of the No. 9s Big Block Modified, comes into the Bad Boy Off Road World Finals recording 10 wins, 19 top-five finishes and 20 top-10s out of 24 races. Sheppard is ahead of five-time NAPA Auto Parts Super DIRT Week winner Stewart Friesen by 218 points.

The battle for the top five in the end-of-year point standings is where it really heats up. Only 11 points separate fifth-place Jimmy Phelps, sixth-place Brett Hearn and seventh-place Larry Wight.

Qualifying for Friday and Saturday’s main events begins Thursday, Oct. 27th at 5:00pm. Friday Oct. 28th will include the first round of feature races, and Saturday, Oct. 29th will feature the final races for the 2016 season, after which three 2016 Champions will be crowned. Tickets for the Bad Boy Off Road World of Outlaws World Finals can be purchased through the Charlotte Motor Speedway website, by calling: 1 (800) 455-FANS (3267), or through the ticket booths located at The Dirt Track at Charlotte Motor Speedway.

For the first time at the Dirt Track at Charlotte, children under 17 will be allowed in the pit area. Minors will be required to have a Charlotte Motor Speedway waiver signed by both parents or guardians in order to enter the pit area with a regularly priced pit pass. Please note that if both parents are not present at the event, the waiver must be completed in advance, signed by both parents or guardians and notarized. Waivers are available at charlottemotorspeedway.com/waivers

If you are unable to make it to the event, watch it LIVE on http://www.dirtvision.com/

Schatz Seeking History at World Finals: Can become the first driver to win both sprint and late model class