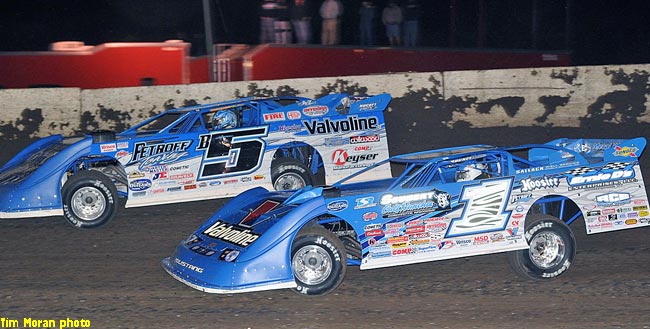 Battle Lines Drawn For Belle-Clair Speedway On Sept. 13, Federated Auto Parts Raceway At I-55 On Sept. 14

CONCORD, NC – Sept. 6, 2013 – On one side are the stars of the World of Outlaws Late Model Series. On the other are the standouts of the DIRTcar UMP circuit.

The two come together on Fri., Sept. 13, at Belle-Clair Speedway in Belleville, Ill., and Sat., Sept. 14, at Federated Auto Parts Raceway in Pevely, Mo., for a final 2013 showdown in the heart of DIRTcar UMP country.

It’s the second consecutive year that the Photobilly 50 at Belle-Clair and Pevely Nationals at Federated Auto Parts Raceway will combine to form a spectacular late-season WoO LMS doubleheader – and in the wake of the 2012 results at the St. Louis-area tracks, the World of Outlaws travelers will be out for some revenge.

Last year’s Belle-Clair/Federated weekend was swept by DIRTcar UMP stalwarts from the Land of Lincoln – young Brandon Sheppard of New Berlin, Ill., captured the Photobilly 50 for his first-ever WoO LMS triumph and veteran Dennis Erb Jr. of Carpentersville, Ill., earned his fourth career victory on the tour in the Pevely Nationals – so the Outlaws must step up their game to regain bragging rights on their Midwestern cousins.

“Nowhere in the country do the World of Outlaws Late Model Series regulars face a bigger challenge than when we visit DIRTcar UMP-sanctioned tracks in the Midwest,” said WoO LMS director Tim Christman. “With so many talented, tough drivers running on the DIRTcar UMP circuit and so many challenging tracks in the region that are known for producing great racing – like Belle-Clair and I-55 – the World of Outlaws guys always have their work cut out for them. That definitely creates memorable shows for the fans.”

Perhaps the most formidable speedway on the 2013 for the WoO LMS followers is Belle-Clair, a classic fairgrounds that, at one-fifth of a mile around, ranks as the smallest track the national tour will race at this – or any – season. Ringed by a wall inside and out – including an old-school wooden section in the turns – and featuring a historic covered grandstand on both the homestretch and backstretch, the place popularly called ‘Belle Vegas’ is a hard-care bullring to its core.

Last year Sheppard, then 19, became the third-youngest winner of a WoO LMS A-Main in history after sweeping the tour’s inaugural event at Belle-Clair. Driving the Rocket Chassis house car – the familiar No. 1 machine that this year is once again steered by two-time WoO LMS champion and current points leader Josh Richards of Shinnston, W.Va. –Sheppard set fast time with a new track record, won his heat and topped the Photobilly 50, which is run in memory of late Belle-Clair track photographer Charles Haffer Jr.

Sheppard, who last month returned to Victory Lane on the WoO LMS with family-owned equipment in a USA Nationals preliminary feature at Cedar Lake Speedway in New Richmond, Wis., will bid for more Belle-Clair success on Sept. 13. His defending race-winner status – plus his 2013 championship on the DIRTcar Summer Nationals ‘Hell Tour’ – places him on the favorites list for the Photobilly 50, which boasts a $10,000 first-place prize plus an attractive $1,200 payoff just for starting the A-Main (up from the standard $700) thanks to backing from local sponsors.

Erb, meanwhile, will look to turn back the Outlaws again in the Pevely Nationals at the one-third-mile, high-banked oval co-owned by NASCAR veteran Ken Schrader and Ray Marler. He came out on top of a titanic battle with record-breaking WoO LMS star Darrell Lanigan of Union, Ky., who swapped the lead four times with Erb and rode the wall between turns three and four in a last-ditch attempt to steal the race from the former DIRTcar UMP national and Summer Nationals champion.

More of the same type of action is expected in this year’s 55-lap, $10,000-to-win Pevely Nationals, which seemingly never fails to thrill the fans. All of its past winners under the WoO LMS banner – from current tour regulars Richards (2011), Shane Clanton of Zebulon, Ga. (’08) and Clint Smith of Senoia, Ga. (’07) to DIRTcar UMP star Shannon Babb of Moweaqua, Ill. (’10) and former World of Outlaws traveler Billy Moyer of Batesville, Ark. (’05) – took difficult paths to Victory Lane.

Advance-sale tickets for both the ‘Photobilly 50’ at Belle-Clair and the Pevely Nationals at Federated Auto Parts Raceway are now available for purchase on-line at www.worldofoutlaws.com/tickets or by calling 1-877-395-8606.

For the Sept. 13 event at Belle-Clair, pit gates will be unlocked at 12 noon CT, the Will Call window for ticket pickup will open at 3 p.m. CT and gates will open at 4 p.m. CT. Hot Laps will begin at 6:30 p.m. CT with qualifying starting at 7 p.m. CT and racing, which also includes the UMP Modified division, commencing at approximately 7:30 p.m. CT.

At Federated Parts Raceway, all gates will open at 4 p.m. for the Pevely Nationals, which also boasts competition for the UMP Modifieds and Sportsman. Hot laps are scheduled to kick off at 6 p.m., followed by WoO LMS time trials at 6:30 p.m. and racing at 7 p.m.

Both the Belle-Clair and Federated Auto Parts Speedway at I-55 WoO LMS events will be contested under the DIRTcar UMP Hoosier tire rule. Three compounds – LM 20, 30 and 40 – will be permitted for use.