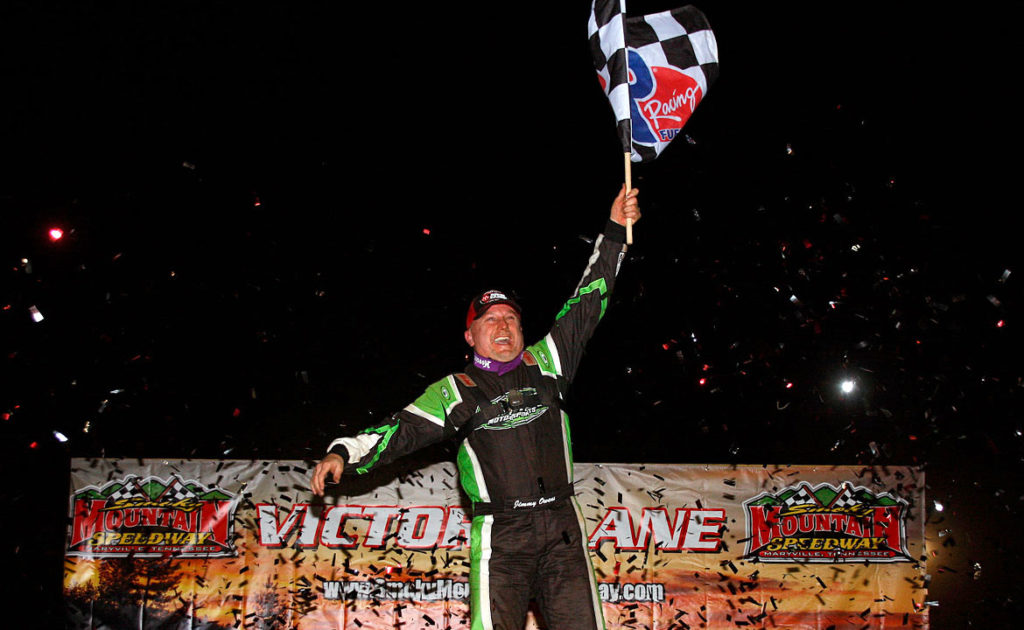 MARYVILLE, TN — Series Announcer Rick Eshelman called his name for the redraw, and the packed grandstands on Saturday night at Smoky Mountain Speedway emitted the loudest roar of applause heard at the track in a long time. Jimmy Owens was most definitely among the core of his large home-state Tennessee fanbase, and he cashed in big, winning the 13th World of Outlaws Morton Buildings Late Model Series Feature of his career and first since June 2 of last year.

“It’s awesome,” said an elated Owens, who hails from nearby Newport, TN. “When you come home and hear all your people cheering for you in your home state, it’s really humbling. It never gets old.”

Owens was almost flawless the entire night, laying down a solid qualifying lap, winning his Drydene Heat Race and redrawing the outside pole. The only man standing in his way in the Morton Buildings Feature was the man gunning for a record-tying six wins in-a-row, Brandon Sheppard.

Right from the drop of the green, Owens took command, hugging the low line and gradually pulling away from Darrell Lanigan and Sheppard. It was Lanigan’s six-race win streak Sheppard was trying to tie on Saturday night, and it was lap 17 when Sheppard made his move underneath Lanigan to steal second and start running down Owens. Sheppard closed the gap in under five laps and immediately showed Owens just how close he was, getting under the #20 several times before a number of yellow flags restacked the field.

While Sheppard was so strong on the low side, Owens was able to hold him off racing one groove higher. Owens consistently hit his marks to lead all 60 laps en route to a $12,000 prize in the 6th annual Tennessee Tip-off. It wasn’t easy, as he was under attack and forced to defend his lead almost the entire race.

“It got a little bit more bottomed-out than what we like to see,” Owens said. “But in the end, it was just a pretty good run all night long.”

Sheppard tried all three lanes to make a pass, but his efforts went unrewarded. However, that doesn’t mean Owens didn’t feel the pressure.

“I could hear him under me and behind me,” Owens said. “I just knew it was going to take a real good car to get around us on the outside because it wasn’t really rubbered-up or anything like that, I was just riding around the bottom and that just seemed to be the better line to go.”

Despite Sheppard’s best efforts to keep the win streak alive, it just wasn’t in the cards for the Rocket1 Racing team. He did all he could with the great car he had, and holds his head high, despite falling just one race short of Lanigan’s win streak record.

“We had a really good racecar,” Sheppard said. “We’re definitely really happy to be in second and fortunate to keep this thing up front. The team’s working hard and everything’s clicking right now, we’re definitely not disappointed with a second-place run.”

Sheppard also acknowledged the fast bottom lane, but moved up for a few laps at one point to try and get around the leader on the top side. Owens is from around these parts, however; perhaps that home-track experience played the biggest factor in his successful defense of the lead.

“You could run kind of wherever you wanted to on the racetrack, but there weren’t any lines that were faster than the others, unless the guy in front of you messed up,” Sheppard said. “This is Jimmy’s home turf, so it’s not like he’s going to mess up here.”

On the flip side, the next race on the World of Outlaws tour is the Illini 100 on April 5 and 6 at Farmer City Raceway in Illinois, which is Sheppard’s home turf. With his momentum built up through the first eight Series races, Sheppard looks to use that home-field advantage to start a new win streak in his pursuit of a third Illini 100 title.

“[Famer City] is my home track and all my family and friends are going to be there,” Sheppard said. “[The Illini 100] is one I really look forward to so hopefully the weather’s nice. We’ve got a really fast racecar right now, so that makes going to my home track even more exciting.”

Rookie of the Year contender Ricky Weiss wrapped up his stellar weekend in Tennessee, finishing third on Saturday after a fourth-place effort in Friday’s show at Duck River Raceway Park. Once again, he increases his Rookie points lead over Kyle Hardy, and now sits sixth in overall championship points.

Weiss came charging from his ninth-place starting spot, and seemed to be getting faster as the race went on, making a lap-41 pass around Chris Madden for fourth and taking third from Lanigan just two laps later.

“We got down to the bottom, got back to where we started and got rolling,” Weiss said. “The longer the race went on, the better we were. Typically, that suits my driving style, suits the car and we came out of there in one piece.”

While still searching for his first win on the tour, this was the Headingley, Manitoba, Canada-native’s best finish with the World of Outlaws since 2007 at Tazewell – a third-place run there as well. The Sweet-Bloomquist Chassis hot shoe certainly is turning some heads in the Dirt Late Model world.

“We were hoping to open some eyes and pick up a few bigger sponsors to cushion our team and get some help rolling,” Weiss said. “I think we’re going to be a force to be reckoned with by the end of [this season].”

Next up for the World of Outlaws stars is the Illini 100 at Farmer City Raceway on April 5 and 6. Click here to purchase your tickets and parking, and here to get your DIRTVision Late Model Fast Pass if you can’t join us at the track!