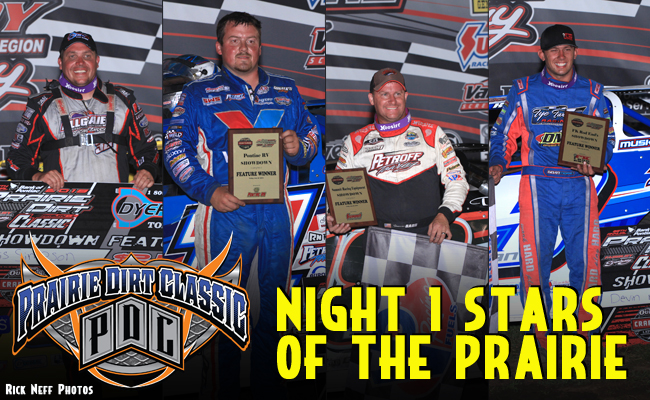 The 61 teams on the property, the highest car count of the season, were split into four Showdown Qualifier Features based on qualifying times, with the top four finishers in each race transferring to the 100-lap headliner on Saturday, July 28, while the top two from each go to the redraw on Saturday for their starting positions in the first four rows of the PDC. Chris Simpson, defending Series Champion Brandon Sheppard, reigning Rookie of the Year Devin Moran, and three-time PDC winner Shannon Babb all collected $2,500 apiece for winning their respective Showdowns.

In the Dyers Top Roads Showdown Qualifier Feature #1, PFC Brakes Fast Qualifier (13.188) Bobby Pierce and Chris Simpson brought the field down to the green flag. The 34-year-old Simpson jumped out to the early race lead and the Oxford, IA driver paced the field the rest of the way in his #32 Cheap Cars / Longhorn Chassis / Durham Racing Engines machine to score the win. Kyle Bronson finished second to make it into the Redraw, while former PDC winner (2004) Don O’Neal, who started 11th, and Paul Parker, who started 14th, completed the transfer cars. Another former PDC winner (2003) was on the outside looking in as he finished fifth, the first spot out of a transfer position.

The Pontiac RV Showdown Qualifier Feature #2 was next as current points leader Mike Marlar and second in points Chris Madden started on the front row. Marlar led the way for the first 15 laps until defending Series Champion and defending PDC winner Brandon Sheppard slid past. From there, it was all Sheppard as the 25-year-old driver of the Seubert Calf Ranches / Rocket XR1 Chassis / Durham Racing Engines ride from New Berlin, IL drove away to the victory. Madden finished second to get into the Redraw, while Billy Drake, who started ninth, and Marlar completed the transfer positions. Jimmy Owens completed the top five.

2017 Rookie of the Year Devin Moran and Scott Schmitt, who is third in weekly DIRTcar Super Late Model points at FALS led the field to the green flag for the FK Rod Ends Showdown Qualifier Feature #3. The 23-year-old Moran shot out into the lead from the drop of the green and the Dresden, OH pilot in his #9 Tommy Pope Construction / Rocket XR1 Chassis / Clements Racing Engines machine never looked back en route to the checkered flag. Defending FALS Track Champion, Ryan Unzicker finished in second to earn himself a spot in the Redraw while 2011 Series Champion, Rick Eckert and Michael Kloos, who was involved in a first lap incident and clawed his way back towards the front, completed the transfer cars. Tyler Erb completed the top five finishers.

The final race of the night would be the Summit Racing Equipment Showdown Qualifier Feature #4, 2015 PDC winner Jonathan Davenport and three-time PDC winner Shannon Babb would start on the front row. Babb would jump out into the early lead with 2018 DIRTcar Summer Nationals Hell Tour Champion Brian Shirley following him around Davenport for second. Soon the trip was joined by 2017 MARS Super Late Model Series Champion Tanner English, and the quartet put on a battle for the ages with position constantly swapping back and forth. With nine laps to go, Shirley slipped past Babb for the lead, but coming down for the checkered, Babb inched back out ahead to score the popular triumph. Shirley settled for second but made it into the Redraw. English was third as Davenport was the last car to transfer into the show. Gordy Gundaker finished off the top five.

The 29th annual Prairie Dirt Classic continues Saturday, July 28 with three Last Chance Showdowns that will take the top two out of each and lock them into the 100-lap main event. There will also be spots reserved for two World of Outlaws and two FALS Provisionals that will round out the 26-car starting field for the PDC. One more starter could come from the 9th annual Prairie Dirt Shootout presented by Summit Racing Equipment for non-qualifiers. The winner will have the option of taking the $2,000 prize money or the 27th starting spot in the 100-lap Sears Craftsman Feature, paying $30,000 to win.

For more information on the Prairie Dirt Classic presented by Bank of Pontiac visit: fairburyspeedway.com. Tickets are still available online, and the event will air live on DIRTVision and DirtOnDirt.