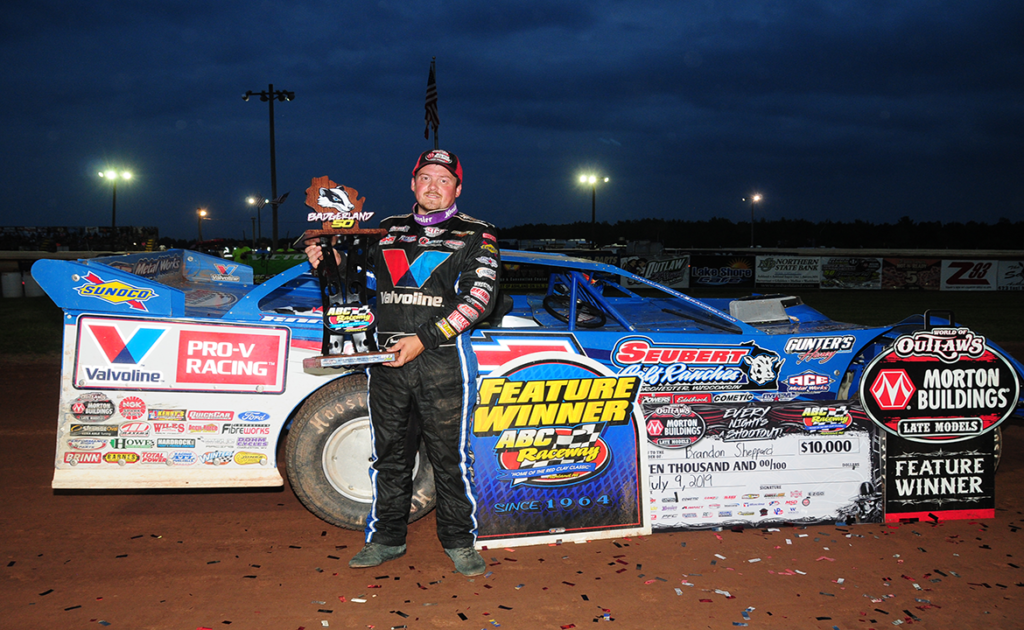 Brandon Sheppard has been so good this year, not even a mid-race rain shower on Tuesday night at ABC Raceway could slow him down. In fact, the rain that halted the World of Outlaws Morton Buildings Late Model Series Feature after 18 laps might have actually helped him out, altering the track surface enough that when action resumed, he was even better.

Sheppard charged to his fourth consecutive victory and 12th win of the year, holding off Shane Clanton and Ricky Weiss in the Series’ debut at ABC Raceway. 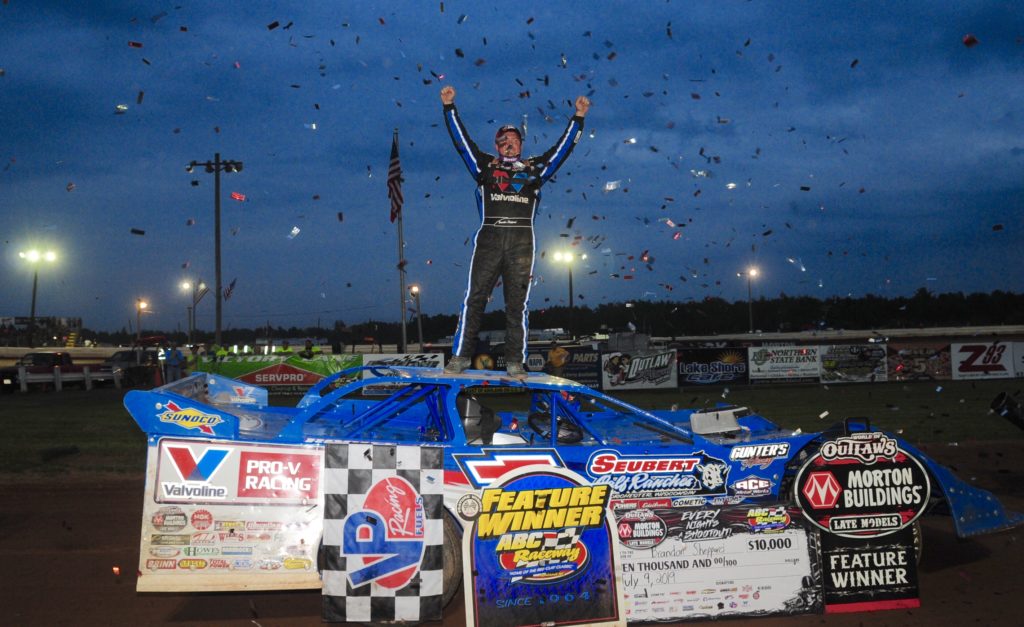 Pulling onto the racetrack at 7:45pm central for the inaugural Red’s Auto Badgerland 50, in an incredible effort by World of Outlaws and ABC officials to beat the weather, Sheppard took the lead from the pole and smoothly led the first 18 laps with Weiss and Clanton following behind him. At no point in the contest did lapped traffic give Sheppard any major fits, but Weiss was closing the gap in traffic and even took a peek to the inside by the time the first caution was thrown for rain on lap 19.

The field paced under yellow for a handful of laps before the rain paused and went back to green, briefly. A three-car tangle in turn three broke out on the second attempt at a restart, signaling a track too wet to continue as the rain fell once again.

Once the then-soaked racetrack was evacuated, drivers and crews used their time in the pit area to make adjustments for a freshly packed and tacky racing surface until the rain stopped. Quite an improvement came out from underneath most of the leaders, as Sheppard turned the fastest lap of the race on the next restart, and Clanton shot out of a cannon to get by Weiss and challenge Sheppard for the lead.

It took less than four circuits for Clanton to get a run going to the inside of Weiss for the runner-up spot, as they drag raced down the frontstretch for position, completing lap 22. At that point, Clanton was on a mission to catch the Rocket1 Racing car out front, who was just over two seconds ahead and heading into lapped traffic. 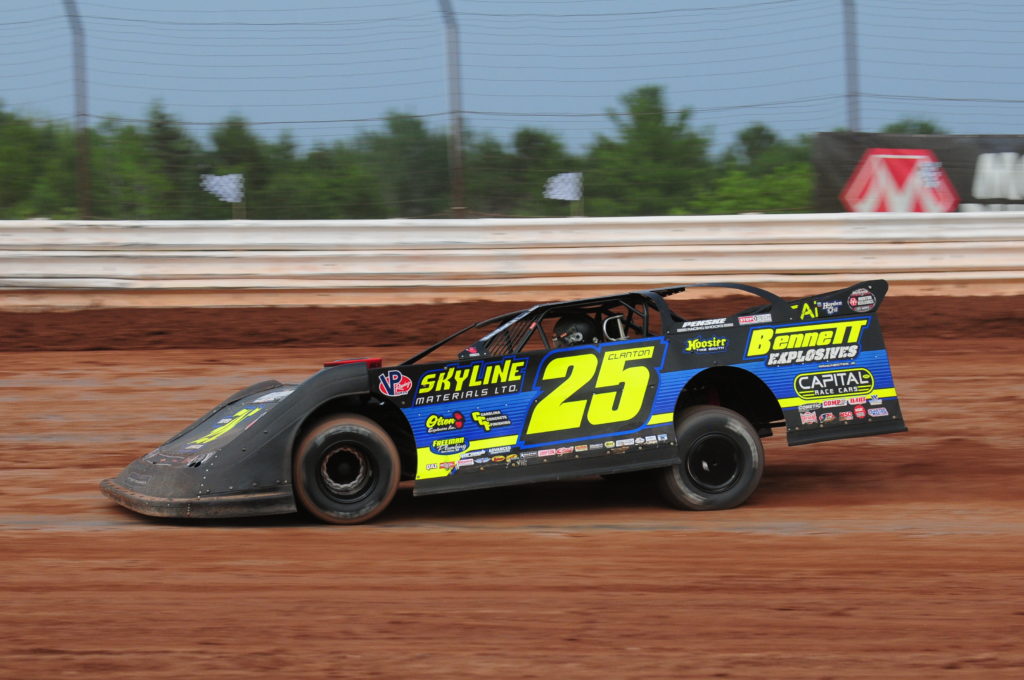 “The Georgia Bulldog” reeled in the leader by lap 35 and assaulted the topside in an effort to gain an advantage. He and Sheppard switched lines in the final ten laps as Clanton began diving deep into turns three and four to try and get by on the bottom. But it was of no use; Sheppard was too strong on the top side. “The Rocket Shepp” led every lap on en route to his first victory at ABC and 49th of his World of Outlaws career.

The added moisture to the racing surface seemed to play right into the hands of the leaders, as Sheppard was able to move around to move his line around equally before and after the rain delay.

“The track changed a little bit after the rain, but they did a good job of keeping it sealed up,” Sheppard said. “The track guys did a really great job, and I thought it was pretty nice all night long. It’s just another one on the list of places I’d like to come back to, definitely a lot of fun out there.”

Clanton also benefitted from the rainfall and used the downtime to make the necessary adjustments to make the pass on Weiss.

Things have really been looking up for the 2015 Series champion, just weeks into his Skyline Motorsports venture. Two Drydene Heat race wins in the last two events after totaling just three in his previous 18 starts, 33 laps lead last in last weekend’s Gopher 50 and now a runner-up to a man who’s been dominating the circuit all year shows just how well he and the Greg Bruening-owned team are gelling. Heading into a few places he’s also familiar with this weekend, Clanton has a positive outlook on his chances to pick up his second win of the season.

“If we make the right adjustments at the right time, we can one of these things – maybe a couple of them,” he said.

Mark yet another solid podium finish on the board for Rookie contender Ricky Weiss, who now stands second in top-three finishes only to Sheppard. Despite a result that put him back into a tie with Chase Junghans for third in Series points, Weiss seemed to be one of the few drivers that didn’t benefit from the rainfall. 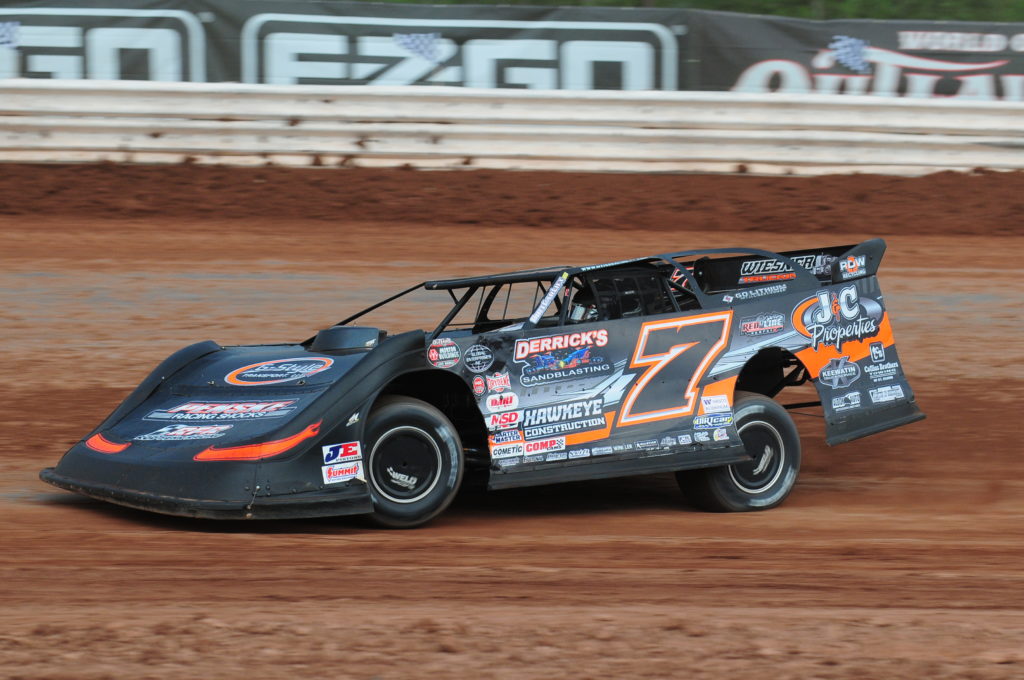 He’s said it many times before – the longer a race stretches, the better his car gets. With the 20-minute delay to deal with,

“The track was just getting to our liking, it was starting to blow off when the rain fell,” Weiss said. “That made it a lot faster. We’re good, but not quite as good when it’s fast like that.”

Series Announcer Rick Eshelman certainly doesn’t call him “Slick Rick” for nothing. And if the stellar charge, yet sour ending to his Firecracker 100 run last month at Lernerville Speedway wasn’t an indication of how he prefers racing conditions, let Tuesday’s race be an example. The longer the distance, the better he does.

Now, it’s crunch time for the Headingley, Manitoba-native, who’s most familiar with the upcoming tracks like River Cities Speedway this Friday night. He’s got one big thing still left to prove as an Outlaw in his Rookie year, and that still sits in Victory Lane after 50 laps. And what a story that would be if he could take down the competition and score his first World of Outlaws win in front of his fans, friends and family.

“There’s a lot of people supporting me on social media right now that are all around those areas, so it’ll be cool for them to get to come out and watch us,” Weiss said. “Hopefully, the bad luck has left us and we can continue these top-three runs.”

Up next, the Outlaws take on a grueling weekend of three races in three states in three days. River Cities Speedway in Grand Forks, ND is up first on Friday, July 12, Ogilvie Raceway in Ogilvie, MN on July 13 and another Series debut appears at Red Cedar Speedway on July 14. Catch all of the action LIVE on DIRTVision!