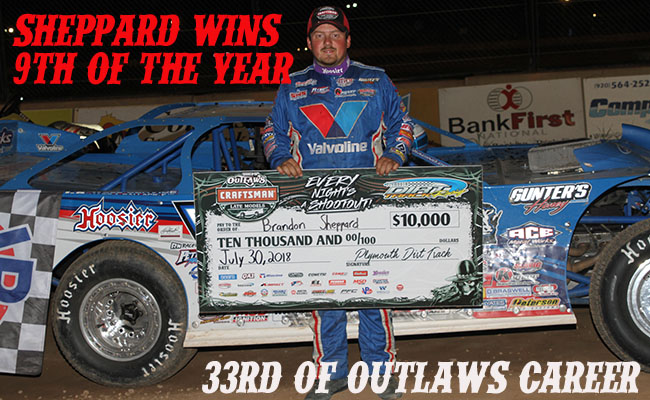 PLYMOUTH, WI — July 30, 2018 — For the first time in World of Outlaws Craftsman® Late Model Series history, the most powerful stock cars in the world invaded the 1/3-mile of Plymouth Dirt Track (Sheboygan County Fair Park), located east of Fond du Lac in Plymouth, WI, on Monday, July 30 for the Wisconsin Refrigerated 50. The 171th host track in Series history saw defending Series Champion Brandon Sheppard grab the lead on lap five and hold off 2017 Rookie of the Year Devin Moran to score his ninth Feature win of the season and 33rd of his Outlaws career.

“It was a fun race, but the track was really bottom dominant and that made lapped traffic really tricky. I knew three and four was decent on top, but I wasn’t too sure about going up there and try to pass lapped cars,” offered the 25-year-old driver of the #1 Seubert Calf Ranches / Rocket XR1 Chassis / Durham Racing Engine machine. “The biggest thing about going to a new track is that you don’t have any bad habits from there. When you’re racing against this type of competition though, you’ve got to be on your game all the time. It’s always good to gain a few points, but at the end of the day as long as we’re winning races, we’re happy.”

Tyler Erb and Jimmy Owens brought the 26-car starting field to the green flag to start the 50-lap feature. Erb would beat Owens to the first corner to set the pace as Sheppard, who started right behind Erb in third, was also able to slip past Owens to take the second spot. On lap five, Sheppard went by Erb to take over the race lead as Erb was relegated to second and then lost that spot to 2017 rookie of the year, Devin Moran. Hot off his $30,000 payday at the last race at Fairbury American Legion Speedway (IL) in the Prairie Dirt Classic, Moran wasted no time in reeling in Sheppard and the race was on for the lead.

Sheppard was able to maintain the top spot utilizing lapped traffic to his advantage. Moran pulled up next to the race leader on several occasions but could not make the pass for the lead. Behind the lead duo, Erb, who fell back to as far as sixth, began his comeback and was in an intense battle with the second-place driver in the season long points chase, Chris Madden for the final podium position in third. But neither could catch Moran or get close to Sheppard, who continued to use lapped traffic to his advantage and pull away from Moran and the rest of the field for the $10,000 payday.

For Sheppard, his victory moves him to within four Feature wins of fifth place on the all-time wins list, currently held by 2011 Series Champion Rick Eckert, who has 37. Additionally, Sheppard was 60 points out of the points lead and 38 markers behind second coming into the night. After his victory, he was able to cut both disadvantages down to 44 out of first and 30 out of second spot in his own personal bid to repeat as series champion and give his team, Rocket 1 Racing, their third consecutive title.

“We definitely kept moving around, but I feel like we just maintained, and the lapped cars were just so hard to pass. I think if we would’ve moved up the track and rode that cushion a little sooner and I think we might’ve got him,” remarked the Dresden, OH driver after climbing from his Tommy Pope Construction / Rocket XR1 Chassis / Clements Racing Engines ride. “It was a good points night and we just have got to keep doing what we’re doing. Everything is clicking right now, and we’ve got to take things while we’re hot.”

With his runner-up showing, Moran moves up to fourth in the season points chase as fourth place coming into the night, 2015 Series Champion Shane Clanton, dropped out on lap four due to a failed driveshaft.

Rounding out the podium finishers would be the pole-sitter, Erb in his #91 First Class Septic / Rocket XR1 Chassis / Clements Racing Engines ride. “The cautions just killed us tonight. I really needed to keep my speed up. But overall it was a good night. We’re happy,” relayed the New Waverly, TX driver after the race. “It takes a lot to make this whole deal happen. This has been a learning year for sure. To stay dialed in and just mature as a driver. The more patient I am the better I seem to do, so I need to take that and move forward.”

After the hard-fought battle with Erb, Madden would settle for the fourth spot, but gained ground in the chase for the 2018 championship and is now just 14 points out of the lead. 2018 DIRTcar Summer Nationals Hell Tour Champion, Brian Shirley who completed the top five. Don O’Neal scored a season high sixth place finish while Eckert was seventh after starting 15th. Current points leader, Mike Marlar was eighth as 2014 Rookie of the Year Frank Heckenast Jr. and Tyler Bruening advanced 13 positions to round out the top 10.

Moran won his fourth PFC Brakes Fast Qualifier award with a new track record lap of a 13.783 as 23 of the 36 teams on the grounds broke the old record, which was set by Shirley who went a 14.675 in 2017. Erb, O’Neal, Owens and Sheppard won Qualifier Heats while Jason Feger and Tyler Siefert scored victories in the Last Chance Showdowns.

A 110-mile drive northwest to the big ½-mile of Shawano Speedway, located west of Green Bay in Shawano, WI will be next on Tuesday, July 31st for the $10,000 to win Sundrop Shootout. 2011 series champion, Rick Eckert went to victory lane in 2017, his last win in the series to date and 37th career victory, good for fifth on the all-time wins list. The York, PA veteran had six top-five finishes out of the eight Series races at Shawano prior to his win. He had only ever finished outside of the top 10 one time, back in 2010 when we placed 11th.

For more information, go to the Shawano Speedway website at: shawanocountyfair.net/shawano-speedway