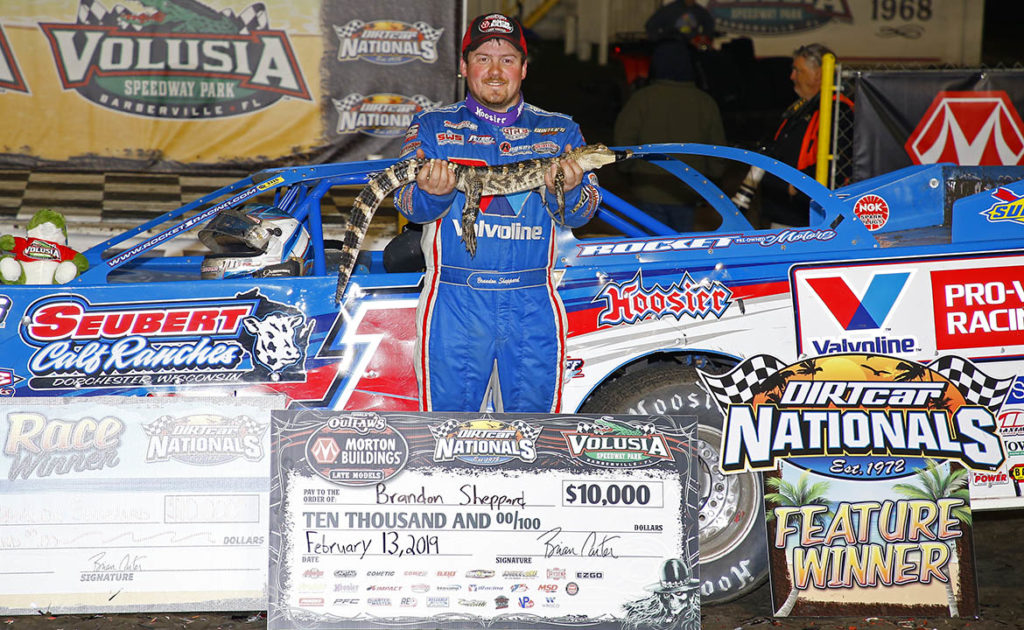 While “The Rocket Shepp” was in control, a wild race waged behind him. Don O’Neal had fallen as far as 16th before he hooked up and charged all the way to second while former DIRTcar Nationals champion Josh Richards hung tough all night in the top five and finished third.

But a perfect setup in the Morton Buildings Feature was exactly what Sheppard needed to hold off Scott Bloomquist and Dale McDowell in the early going, and then be able to move through traffic on the expertly prepared racing surface.

“I think our car was maneuverable enough that we could have passed cars if we needed to,” said Sheppard, of New Berlin, IL. “We passed a few lapped cars there. Like I said, our car was maneuverable. It was very balanced and fun to drive, and the track was fun to drive too. It was kind of a little bit different at both ends and you could move around on it, so it was fun.”

Sheppard started his night off with a hammer-down qualifying effort, clocking in at 16.097 – good enough for fifth overall. He grabbed the early lead in Heat 2 and redrew the pole, never looking back once through multiple restarts toward the end of the race. For he and his crew, Sheppard was just glad to pick up a victory at Volusia, as he was feeling the pressure after going winless in his first 14 starts this year from Arizona to Georgia and Florida.

“I knew as long as we could keep up front and keep running good that the wins would come. Usually, we’ve got one by now, so the pressure was on. For me, it’s a big relief to finally get the first one out of the way… I almost thought I forgot how to do it for a minute.”

After scoring 13 wins last season, the Mark Richards Racing, Rocket Chassis house car wound up second in the Series championship after a few unfortunate DNFs, creating a gap he was unable to make up in the end despite a victory in the World Finals at Charlotte. This year, Sheppard put all that behind him and has never been more focused on posting good, consistent finishes. And what start he’s gotten off to, taking the points lead after just three races.

“Truthfully, there’s less pressure because we didn’t win the championship last year,” Sheppard said. “I think we’ve 100 percent, in my mind, got a championship team. At the end of the day, we’re going to go out and concentrate on getting wins.”

O’Neal has certainly sprung to a great start at Volusia. After finishing fourth in Heat 1, placing him 13th on the starting grid, “The Real Deal” steadily picked off the traffic in front of him, lap-by-lap, earning him a runner-up finish. And what a charge he had, falling as far back as 16th on lap six.

“I stayed on the bottom for probably 15-to-20 laps and then I restarted on the outside after a caution,” O’Neal said. “Then I pretty much just slid on the top after that, and that’s when we got to rolling good.”

This second place sat well with the Clint Bowyer Racing pilot and will give him plenty to build off of going forward through the next three nights of action at Volusia.

“It’s a big thing to build off of, having a good run like we did the more we started,” O’Neal said. “[We’re] just working a little bit on this package we’ve got right here to see if we can’t fine-tune it a little bit.”

The field was full of big movers on the racy half-mile surface as Brian Shirley powered from 20th to eighth and Jonathan Davenport motored from 14th to fifth.

While Richards earned his second top-five this week at Volusia, Chase Junghans motored to his third top-five finish in three World of Outlaws Morton Buildings Late Model Series races this season. Junghans is the only driver who has three top-five finishes in the first three points races.

He agreed this is something to build on throughout the weekend, saying “We’re just going to keep on working on this car, trying to fine-tune it and hopefully get a couple wins before we leave here.”

The Series is back in action Thursday night as it looks for its fourth consecutive different winner to start the season after Brandon Overton, Shane Clanton and Sheppard have taken the first three checkered flags.

Get your tickets here, or your Late Model Fast Pass on DIRTVision to watch every lap live!