Sheppard and Shirley Ready for Illini 100 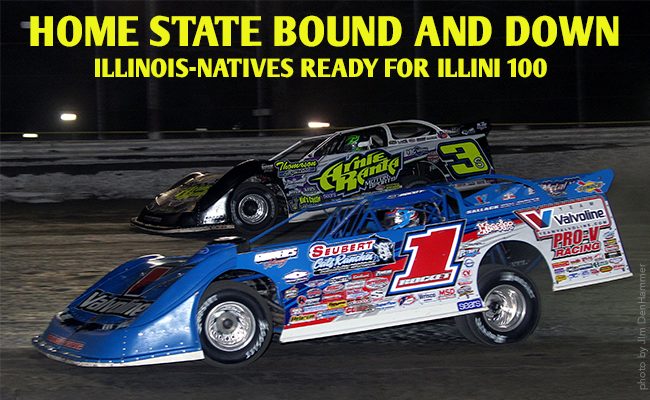 CONCORD, N.C.— March 27, 2017— The best dirt Late Model drivers from around the country are rallying their troops and heading to Farmer City, IL for the 10th annual Illini 100 on March 31- April 1. The Illini 100 at Farmer City Raceway has been a staple event on the World of Outlaws Craftsman® Late Model Series Schedule since the inaugural running in 2008.

Even nine years later, the Feature race in 2008 remains at the top of the list as one of the best dirt Late Model events to ever take place in the state of Illinois.The first-ever Illini 100 consisted of eight lead changes among five drivers and kept the fans holding their breath until the last lap where Billy Moyer Sr. claimed the win on from Shannon Babb who had made a hard charge from the tail of the field to contest for the lead.

The Illini 100 is projected to meet the same hype of the event as in years past as two full-time Outlaws call Illinois their stomping grounds and will leave it all on the track only 1.5 hours from their hometowns.

Brian Shirley from Chatham, IL has consistently been a fan favorite to take the checkers at the Illini 100 among the last few years although he has never been able to seal-the-deal come the end of the night. Last year during the two-day show Shirley took a 17th place finish the first night and an eighth place finish the second night. So far, this year Shirley has proved that he’s a force to be reckoned with this season as he is currently third in the points race.

“When you’re talking about the mid-west or Illinois Farmer City is definitely one of the main tracks that most people focus on as well as Fairbury and Macon,” said Shirley. “It’s in the circle of tracks that a lot of drivers enjoy racing on and a lot of spectators and fans come to watch really good races at. When I first started racing it took me a couple years to figure out how to win there because for a regular race 40 cars come out and it’s the toughest competition. If you want to know how good you are and how fast you are, you race at these tracks against the guys in Illinois.”

Brandon Sheppard from New Berlin, IL and current Series points leader will also be a force to reckon with at the event. Last year at the Illini 100 Sheppard only ran the second night but finished fifth in the Feature. This year add his methodical driving style and the knowledge behind the Rocket Chassis crew and that equation poses a real threat to the rest of field.

“I’ve raced a lot there growing up since it’s only about an hour and fifteen minutes from my house and it’s by far one of my favorite tracks we go to,” said Sheppard “It means a lot to win there and we were fortunate enough to win that race in 2015 but we haven’t been able to go and run the full weekend there in three or four years so now that we’re running the whole weekend it will be a really fun deal. There is definitely going to be some tough competitors there. There’s not going to be any slackers running at this race. I think we’ll be really good at Farmer City it will be nice to be able to practice on Thursday and then run a full night before the big race.”

Shirley, Sheppard and the rest of the Outlaws won’t have it easy in Farmer City as local and regional drivers will try to defend their turf and national drivers will try to claim the title of beating the best.  Some of the biggest names in dirt Late Model racing will appear on the scene including Bobby Pierce, Shannon Babb, Kevin Weaver, Jason Feger, Chris Simpson, Ryan Unzicker, Scott Schmitt, 2016 track champion Joe Harlan, and more.

Tickets for the Illini 100 at Farmer City Raceway are on sale now here. The Series will visit IL a total of eight times this season at various tracks including Fayette County Speedway, Fairbury American Legion Speedway and the Dirt Oval at Route 66. Route 66 Raceway is owned by Sherri Heckenast, sister to full-time Outlaw and Illinois-native Frank Heckenast Jr.