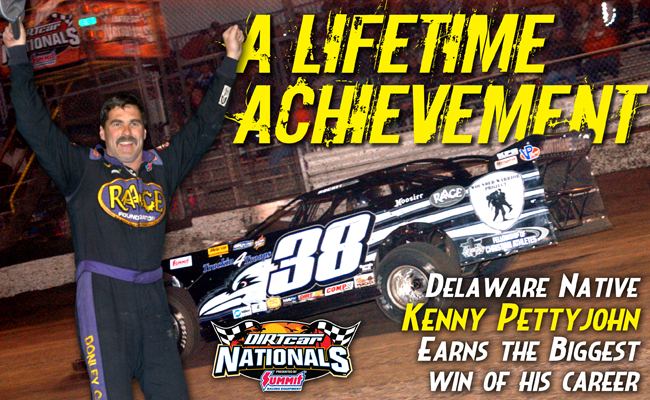 BARBERVILLE, FL – Feb. 18, 2014 – Kenny Pettyjohn was almost at a loss for words after driving away from a star-studded field to capture Tuesday night’s 30-lap DIRTcar Late Model A-Main during the 43rd DIRTcar Nationals Presented by Summit Racing Equipment at Volusia Speedway Park.

A 46-year-old veteran from Millsboro, Del., who has been slinging cars around dirt tracks for nearly 30 years, Pettyjohn was victorious for the first time in more than a decade’s worth of February trips to the sprawling half-mile oval outside Daytona Beach.

“Shoot, I can’t believe I’m standing here,” Pettyjohn said after emerging from his Rocket Chassis machine in Victory Lane. “I think this tops every race that I ever won in my life. To a lot of these guys this wouldn’t be that big a deal, but for me this took a lifetime.”

Pettyjohn became the first driver from Delaware to win a dirt Late Model feature during the long history of the DIRTcar Nationals by Summit. He achieved the milestone with a powerful performance that saw him swap the lead twice with Rick ‘Boom’ Briggs of Bear Lake, Pa., before gaining command for good on lap three.

A caution flag on lap 20 barely slowed Pettyjohn, who pulled away following the restart to defeat the red-hot Brady Smith of Solon Springs, Wis. – a driver who has finished no worse than third with his new Rocket mount in his Sunshine State starts over the past five nights – by 1.075 seconds.

Brandon Sheppard of New Berlin, Ill., passed Shane Clanton of Zebulon, Ga., for third on lap 28 and finished in the show position driving the Rocket Chassis house car. Clanton, who advanced from the seventh starting spot to second by lap eight, settled for a fourth-place finish and eighth-starter Scott Bloomquist of Mooresburg, Tenn., completed the top five.

Pettyjohn, who started from the outside pole, was never seriously challenged after wrestling the lead from Briggs. He simply hit the setup perfectly for the fast track.

“Matt Barnes (of Rocket Chassis) came over and told me a couple things before the race and I think that put us right on time,” said Pettyjohn, who won the 2013 dirt Late Model championship at Hagerstown (Md.) Speedway. “The car was really good – it was good everywhere to be honest.”

The caution flag on lap 20 – for a two-car incident on the inside of the backstretch involving Morgan Bagley of Tyler, Texas, and Vic Coffey of Caledonia, N.Y. – did provide a moment of pause for Pettyjohn. It not only wiped out his near straightaway edge but also gave him a flashback to the one feature at Volusia that slipped through his fingers.

“We ran second here years ago,” said Pettyjohn, recalling his previous career-best Volusia finish on Feb. 12, 2002. “Don O’Neal passed me (for the lead) on lap 21 – and tonight we had a caution on lap 21 (the lap counter was turned back to 20 for the restart). That was pretty an unnerving feeling I had there.”

But Pettyjohn’s Clements-powered No. 38 had plenty of speed left to keep him in front.

“Really, it’s just a relief to win down here,” said Pettyjohn, who has enjoyed much of his dirt Late Model success at Delaware International Speedway in Delmar, Del. “And to win on a national stage like this is a pretty big deal to me. It’s not about the money. It’s not about any of that. Hey, I’ve spent my whole life doing this, so it’s a relief.”

Pettyjohn, whose career-high payday remains the $9,800 he earned for a runner-up finish at Natural Bridge (Va.) Speedway, spoke the truth when he said the victory was about more than the first-place prize. In fact, the $7,000 he collected was earmarked for a cause bigger than him.

“We’re donating every dollar we make on this Speedweeks trip (to Georgia and Florida) to the Wounded Warriors (Project),” said Pettyjohn, referring to the charity that benefits wounded American soldiers. “When we get home, my car owner (Brian Donley of Abingdon, Md.) will cut a check and send it to the Wounded Warriors Project. With this win, I think we’re over $11,500 now for the trip.”

With 38 cars signed in for action, group qualifying was utilized to set the starting lineups for four heat races in the first of three DIRTcar Late Model programs during the DIRTcar Nationals Presented by Summit.

Heat winners were Briggs, Pettyjohn, Mike Marlar of Winfield, Tenn., and Smith. The B-Mains were captured by Eric Wells of Hazard, Ky., and Owens.

Owens was one of the night’s big stories. He made an unexpected appearance behind the wheel of a new Club 29 car from the stable of two-time World of Outlaws Late Model Series champion Darrell Lanigan, who sat out the program to give Owens an opportunity to try his machine in competition.

BARBERVILLE, FL – Feb. 18, 2014 – The second of three straight evenings of DIRTcar Late Model action during the 43rd DIRTcar Nationals Presented by Summit Racing Equipment at Volusia Speedway Park rolls off tonight, setting the stage for the three World of Outlaws Late Model Series programs that close the meet from Feb. 20-22.

Another 30-lap A-Main paying $7,000 to win is on tap this evening. Fans can watch all the action live by purchasing a DIRTcar Nationals video subscription at www.DIRTVision.com.

10:40 p.m. – Delaware’s Kenny Pettyjohn pulled off an emotional victory in the 30-lap DIRTcar Late Model A-Main, upsetting the star-studded for a win he called the biggest of his career.

Pettyjohn, who started second, swapped the lead once with Rick ‘Boom’ Briggs before gaining command for good on lap three. His march was slowed by a caution flag on lap 20, but following the restart he pulled away from Brady Smith to earn $7,000 for his first-ever triumph at Volusia.

Smith settled for second place, continuing his torrid pace in the Sunshine State over the past five nights. Brandon Sheppard placed third after overtaking Shane Clanton on lap 28, leaving Clanton fourth at the checkered flag and Scott Bloomquist fifth.

Rick ‘Boom’ Briggs and Kenny Pettyjohn will lead the feature field to the green flag. The event will hit the track after the evening’s second 20-lap UMP Modified A-Main, which is currently being contested.

8:40 p.m. – Pennsylvania’s Rick ‘Boom’ Briggs, Delaware’s Kenny Pettyjohn, Tennessee’s Mike Marlar and Wisconsin’s Brady Smith were victorious in the four 8-lap heat races…. Briggs enjoyed by far his best performance of his five days in Florida, bursting into the lead at the start of the first heat and marching on to win 0.960 of a second over John Blankenship…. Pettyjohn controlled the second heat, beating Brandon Sheppard to the finish line by 1.144 seconds…. Marlar cruised to a 1.328-second triumph over Shane Clanton in the third heat…. Smith continued his powerful stretch of Sunshine State racing, controlling the fourth heat…. Jimmy Owens finished fifth in the third heat, falling short of transferring by one spot. He became the second driver in as many nights to set the overall fastest time in qualifying and then fail to make the cut through a heat race, joining Billy Moyer….

Look out for the ‘O Show’

7:30 p.m. – Jimmy Owens didn’t take long to get comfortable in Darrell Lanigan’s Club 29 machine, turning a lap of 16.050 seconds in Group 3 to record the evening’s overall fastest lap in the group qualifying session.

Each heat will run eight laps and the top four finishers will transfer to the 30-lap A-Main.

6:15 p.m. – A field of 38 DIRTcar Late Models is signed in for tonight’s action, which has begun with hot laps.

Tonight’s big news is happening in the pit area of Darrell Lanigan, who is gaining plenty of attention despite taking tonight’s program off. Lanigan will enter one of his cars in the show, however — with dirt Late Model superstar Jimmy Owens behind the wheel. Owens, who sat out last night’s program, will try out one of Lanigan’s self-designed Club 29 machines that has been renumbered with Owens’s familiar No. 20.