O-SHOW SHINES: Owens Gets Win #2 of the Year at Davenport 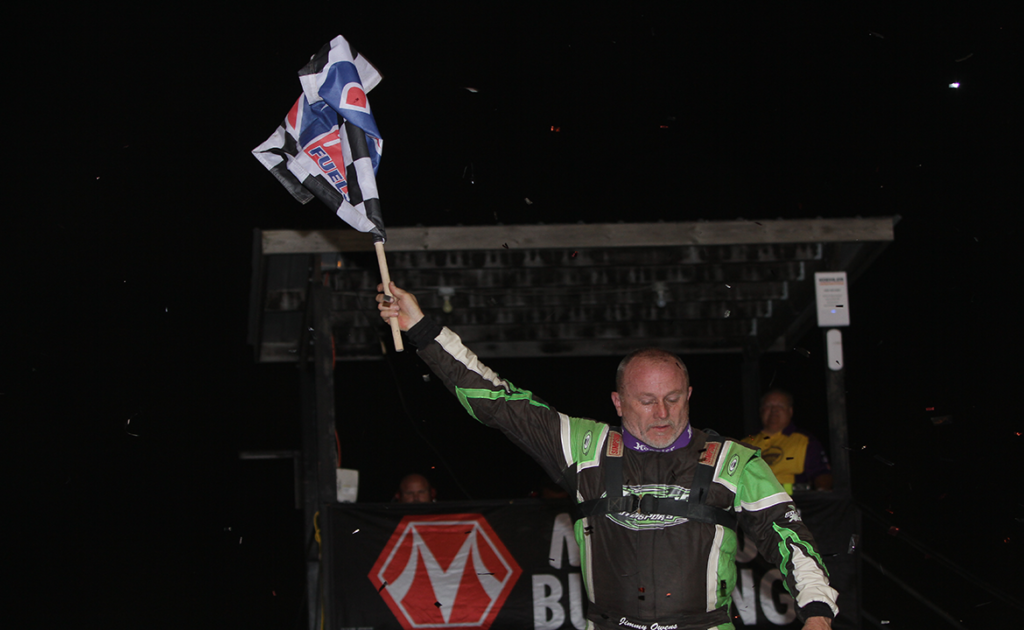 It takes an incredible amount of might and muscle to wheel it around the big half-mile of Davenport Speedway for 40 laps. He who tames it must have the ultimate combination of driving skill, crew and equipment to get the job done against the World of Outlaws Morton Buildings Late Model Series.

None of those things seemed to be an issue for Jimmy Owens on Wednesday night, as “The O-Show” put on quite a show of his own, leading all but two laps en route to his second World of Outlaws victory of 2019 over Brandon Sheppard and Cade Dillard.

Put simply, Owens dominated all night. Kicking things off in Qualifying with a new track record and the PFC Brakes Fast Time Award, Owens also grabbed the win in Drydene Heat one and redrew inside row two.

Home-state favorite Brian Birkhofer also won his Drydene Heat race and walked up to the redraw to a thunderous round of applause from an abundance of his fans in the packed grandstands and pulled out the remaining pole position.

At the drop of the green in the Morton Buildings Feature, “Birky” took off like a rocket and immediately opened up a sizable gap over Owens and Darrell Lanigan before a red flag was thrown for a big wreck in between turns three and four, involving Chad Simpson and Brent Larson.

Everyone walked away from the incident unharmed. Their cars however, did not, and Birkhofer soon found himself in the same boat. The quick-change component in the rear-end had broken just before the red was thrown, and Birkhofer parked it for the night before the field came back to life under yellow.

This handed the lead over to Owens, who grabbed the clean air by the horns on the ensuing restart and never gave up the lead through the remaining 38 laps. At one point, his lead stretched to just under five whole seconds before hitting lapped traffic.

Owens was met with two restarts before the checkered flag fell, one taking 2018 World of Outlaws Champion Mike Marlar out of the race in a big cloud of smoke on a lap 33 restart. This put a hungry Sheppard directly behind him, who has always made the most of those opportunities.

But Owens and his Ramirez Motorsports ride were just too hooked-up off of turn four. He took off on the final restart and left the field in the dust to collect the 14th World of Outlaws Feature win of his career.

“We were great, right from the time we unloaded,” Owens remarked. “This is the first time I’ve been here, and it’s a big ol’ racetrack. About halfway down the straight-away, your motor is just like ‘give me a break!’ But everything worked out great for us.”

In each of the three previous World of Outlaws visits to the Mississippi Valley Fairgrounds oval, a local Iowan picked up the victory – first in 2004 with Birkhofer, again in 2007 with Brian Harris and a third time last year with Chad Simpson. Owens broke that trend on Wednesday night, and has now won at least two Morton Buildings Features in each of the last two seasons.

Sheppard and the Rocket1 Racing team again continued their power trip on the circuit, coming in behind Owens to bag the runner-up spot and their 20th podium finish of the season. A terrific display of passing and line-switching was seen from the Rocket Chassis house car in the first quarter of the race, as Sheppard maneuvered all the way up to second from his 10th-place starting spot by lap 10.

His biggest battle of the night was seen alongside Mike Marlar. Lap-after-lap, Sheppard chased the #157 until Marlar’s engine expiration occurred with only eight laps remaining. Inheriting second-place back from the incident, Sheppard maintained his position behind Owens to the finish and extended his points lead over the field.

Much like Owens acknowledged about himself, Cade Dillard had also never previously seen the Davenport facility. But what a great run he and the rest of his crew were able to put together on Wednesday night, as Dillard scored his first podium finish of the year after battling in the late stages with former Series champion Shane Clanton.

“The track was getting a bit rough up top and I was starting to bottom-out at the end,” Dillard said. “I was just trying to hold onto what we had and finish and not knock the fence down.”

“Shane ran me clean and left me plenty of room,” Dillard added. “It’s nice to race with people like that – someone who respects yours and their equipment, and I appreciate that from him.”

This makes back-to-back top-five finishes for the Robeline, Louisiana-native, heading into two big weekends that will test the limits for the Rookie of the Year contender against the expected high car-counts at Fairbury Speedway and Cedar Lake Speedway.

“I’m tickled to death with a top-three,” Dillard said. “With these guys, they’re tough, and it’s been a hard road so far to get here. It’ll be even harder going forward, but we’re definitely getting better.”

The World of Outlaws now stare down a grueling schedule of seven races over the next ten days, starting with the 30th annual Prairie Dirt Classic at Fairbury Speedway on Friday, July 26. The 100-lap, $30,000-to-win main event will conclude the weekend on Saturday night, before just one day off on Sunday and back to racing at Plymouth Dirt Track and Shawano Speedway on July 29 & 30.