Number Four for Sheppard at Volusia 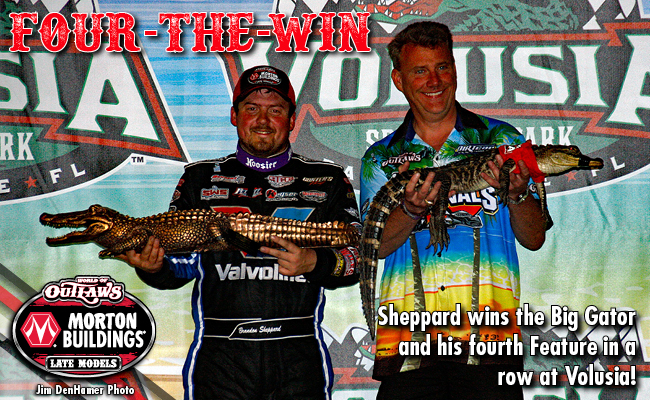 BARBERVILLE, FL – A Big Gator trophy and its family of four are heading back to Rocket Chassis in West Virginia as Brandon Sheppard pulled off the unthinkable on Saturday night, winning the 2019 DIRTcar Nationals Late Model championship by completing the four-race sweep of all World of Outlaws Morton Buildings Late Model Series events at Volusia Speedway Park.

With these victories, Sheppard now holds a DIRTcar Nationals Late Model record as the only driver to win four races in a row in the event’s history. He’s also the first to win four World of Outlaws races in a row since Tim Fuller accomplished the feat in 2009.

Last year’s DIRTcar Nationals Champion, Chris Madden, wrapped up his week with a runner-up finish, bouncing back from what he said should have been another top-five run on Friday night. His teammate, two-time DIRTcar Nationals champ Shane Clanton, made it a two-three finish for Capital Race Cars.

Over the past four races at Volusia, Sheppard led a total of 174 laps out of a possible 200 – all 50 on Wednesday, 39 on Thursday, 41 on Friday and 44 on Saturday. He has now won the last five World of Outlaws Morton Buildings Late Model Series races at Volusia, going back to the final DIRTcar Nationals race of 2018, which he won on Feb. 17.

The Mark Richards Racing team has quite a long list of accomplishments already, and Sheppard agreed that this whole week was an all-around team effort.

“It’s another accomplishment that we’ve added to the list as a team,” said Sheppard, a third-generation racer from New Berlin, IL. “Our team is phenomenal, and they deserve every bit of the success that we have.”

Just like the previous three nights, “The Rocket Shepp” grabbed the lead early and never once relinquished it. A big challenge came from Madden behind him, as he gave chase throughout the entire race, but was never able to make the move. It seemed as though the Rocket House Car was on rails the whole night, rarely upsetting the car even the slightest bit on both the high and low lines.

Madden had a great race, as well, starting from the outside pole and leading the opening laps. Sheppard dove into turn one on lap seven and slid up to the top side, taking Madden’s line and the spot away. But “Smokey” got back on the horse and gave Sheppard all he could handle through the next 44 laps.

His finishes of sixth on Thursday night and now second on Saturday were just the finishes he and the Skyline Motorsports team were looking for this week. It gives Madden and his crew a lot of confidence moving forward in accomplishing the goals they set out at the beginning of 2019.

“Hats off to Marshall Green and Capital Race Cars,” Madden said. “We’ve had a phenomenal week ourselves to come down here and accomplish what we did and do what we’ve done was a pretty huge goal for us. I’m excited and very happy for everybody that’s supported Skyline Motorsports here. It’s just a great program, it’s going be great for us this year, and hopefully we’ll be able to get a bunch of wins.”

Madden said he should have had another second-place finish on Friday night to back up Saturday’s result, but the damage to his spoiler from an incident late in the race laid those chances for a good finish to rest. However, Madden took pride in the way he raced with the rest of the field throughout the week.

“We had a second-place car last night, for sure,” Madden said. “We were tit-for-tat last night for a while. I feel like the 44 and the 1 car were the best two cars here this week.”

Clanton had a very consistent week with finishes of fifth, two ninths, an eighth and now a third to cap off his 2019 DIRTcar Nationals venture. He joins Darrell Lanigan as the only two drivers to score top-ten finishes in each of the five completed nights of Late Model Week at Volusia.

“Top-10s will bring top-fives, top-fives will bring wins,” Clanton said. “We need more wins, of course, to keep going. But we’re real satisfied with what we’ve done, to get a win at Screven and then to come here and get a top-five and no worse than ninth, it feels real good.”

Starting fifth, “The Georgia Bulldog” made a steady push to third with a car that he said could have been better, but was still pleased to put into the top three.

“I actually thought I had something for [the leaders],” said Clanton, the 2015 World of Outlaws Morton Buildings Late Model Series champion. “But with them long greens, we had a little softer tire than they did on the right front and it just got to where I couldn’t steer. It just got too tight. The cautions were helping a little bit, but once the racetrack cleaned up, they could go ahead and drive away from me.”

With the conclusion of Saturday’s events, the 48th Annual DIRTcar Nationals is now officially in the books. A big thanks to all of the great race fans who came out to be a part of it!

A trip to Tennessee is up next for the Outlaws, as they visit the Duck River Raceway Park and Smoky Mountain Speedway on March 8 and 9. Watch every lap of both races LIVE on DIRTVision!