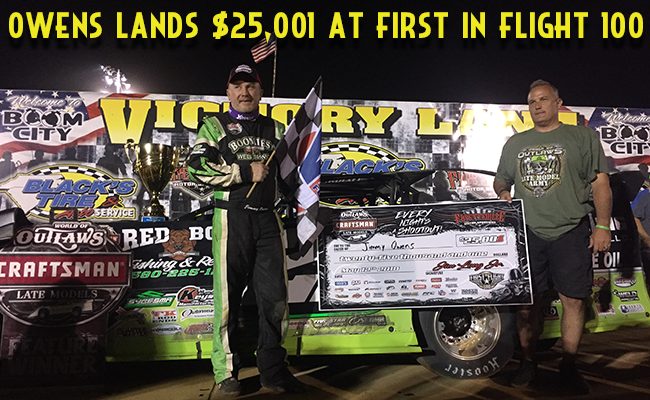 FAYETTEVILLE, NC– May 12, 2018– Jimmy Owens outran the World of Outlaws Craftsman® Late Model Series regulars at Fayetteville Motor Speedway to claim a $25,001 payday during the inaugural First in Flight 100 presented by Hoker Trucking. The veteran driver of Newport, TN also collected an extra $2,001 on Friday evening after winning the 10-lap “Big C Dash for Cash” which honored the late Carlton Lamm.

“This works out great because we were kind of up in arms about even coming and Jim [Long] (Fayetteville Motor Speedway’s promoter) called and said, ‘Are you coming?’ so I said ‘OK’,” said Owens. “I’m glad he invited us. We just feel really welcomed to come down here. The fans have been awesome and everybody has just been great.”

Owens started on the pole for the 100-lap finale beside Brandon Sheppard, the defending World of Outlaws Champion. Sheppard nabbed the lead position on the first lap, but on lap 16 the New Berlin, IL driver succumbed to Owens high-side momentum.

“It got rubbered up about halfway but you can’t do nothing in 90-degree weather,” said Owens. “The guys [at Fayetteville Motor Speedway] did their best to give us an awesome racetrack. I was able to pass for the lead there early and maintain it the rest of the race.”

Fourteen separate cautions fell throughout the feature event, the last happening on lap 99 (for Dennis Franklin who unfortunately ran out of fuel exiting turn four). The event went into “overtime” with a green-white-checkers style finish. Even with the late race caution, Owens was able to pull away from Sheppard by 1.128 seconds by the time the checkers fell.

“I was pretty good on the long runs there and [Owens] was definitely slowing down on the long runs to reserve tires and everything, and I was too,” said Sheppard. “In the beginning, I got out front there and was slowing the pace up and off a restart there he just got up on the wheel and did what he had to do and got back by me and that was the end of it for me.”

“Then, we went single file [for restarts]. I’m glad we did go single file though because I know me and Fergy (Chris Ferguson) had the elbows up coming off of (turn) four and we were rubbing paint,” continued Sheppard. “All and all, I was a pretty good night. Second place, not the turn out we wanted but we’ll take it and congratulations to Jimmy and thanks for all of the fans for coming out.”

North Carolina native, Ferguson was relentlessly trying to chase down Sheppard but fell victim to transmission issues just shy of the half-way mark on lap 47. Headed into tonight’s event, Ferguson was leading the rookie of the year point standings by eight points over David Breazeale. Collecting his best finish of the season so far by rounding out the podium, Breazeale shot ahead of the rookie standings by 26 points over Ferguson, 42 points over Brent Larson and 132 points ahead of Timothy Culp.

“To run third here at Fayetteville after our last feature here about 10 years ago, this has been great,” said Breazeale. “It’s a big morale booster for the team. We got a fourth the other night, then Chris [Ferguson] got a fourth, and then we back it up with third so maybe we gained some points on him tonight… [Racing on new tracks] is a challenge but we enjoy it and I don’t have any bad habits when we go there so we just go there and race the racetrack.”

The World of Outlaws Craftsman Late Model Series returns to action on May 18-19 at Atomic Speedway in Waverly, OH for the Outlaw Invasion $10,000-to-win doubleheader weekend.