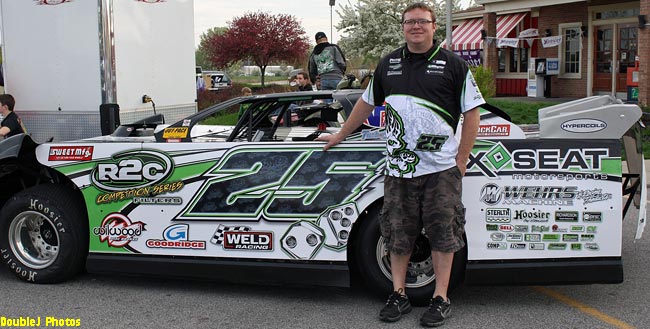 LOCAL HERO: ‘Feger Nation’ will be out in full force this weekend (March 30-31) for the ‘Illini 100’ at Farmer City Raceway – and their hero would like to give them something to celebrate.

Just imagine the post-race scene if the World of Outlaws Late Model Series event’s $20,000 first-place check were to be claimed by Jason Feger, a DIRTcar UMP circuit star from Bloomington, Ill., who considers Farmer City his home track.

“There would be a big party, that’s for sure,” said Feger, who will bid to become the first Land of Lincoln driver to win the Illini 100. “(Farmer City) is close to our home area and we got a lot of great fans, so I’m sure we’ll have a lot of them there. I’m hoping that we can make them proud.”

Feger, 33, has spent the last month with a laser-focus on the Illini 100, which begins with Ohlins Shocks Time Trials and heat races on Fri., March 30, and culminates with B-Mains and the 100-lap headliner on Sat., March 31. He wants to have his Bob Pierce-built car at full strength for his first home-state start of the 2012 season.

“We haven’t been anywhere since Florida (last month’s two weeks of racing in the Sunshine State),” said Feger. “We’ve just been home working on our stuff, preparing everything. We got a new motor put in for (the Illini 100), so I’m looking forward to getting over there Thursday night and shaking it down (at practice).”

Feger hasn’t made a serious run at victory in any of the three previous Illini 100s at Farmer City, but he has performed progressively better. After failing to make the A-Main cut for the inaugural event in 2008 (he suffered a flat tire while running in a heat-race transfer spot), he finished eighth in ’09 (despite being hampered by a suspension problem) and sixth in ’10.

“I’m real excited (for the Illini 100),” said Feger, who displayed his car and met fans on Tuesday night during the Illini 100 Kick-Off Party & Car Show at the Bob Evans restaurant in Champaign, Ill. “(Farmer City is) a great place. I’ve been going there since I was a little kid.

“I got a lot of laps there so I’m really excited to have (the Illini) back there. That’s the biggest race we have in Illinois and it’s back where it needs to be.”

To hear more of Feger’s thoughts on the Illini 100 – as well as comments from 2009 Illini 100 winner Shane Clanton and defending WoO LMS champion Rick Eckert – check out the event preview that is part of this week’s edition of 4Wide.TV.

CHASING A HAT TRACK: Billy Moyer has never lost an Illini 100. He’s also never been involved in a ho-hum race.

The 54-year-old dirt Late Model legend and three-time WoO LMS champion is undefeated in two Illini 100 appearances, winning the 2008 and 2010 editions. Both victories came in down-to-the-wire thrillers over Shannon Babb of Moweaqua, Ill.

Moyer’s triumph in the inaugural Illini 100 was a classic that’s still remembered by all in attendance. In a wildly competitive race that featured eight lead changes among five drivers, he overtook Babb, who had started last in the 24-car field because he changed two tires after reporting to the track for the A-Main lineup, for the lead on lap 85. Babb regained command the following circuit, but Moyer used the inside groove to slip in front on lap 99 and then repelled Babb’s final-corner challenge to cross the finish line less than a half car length ahead.

Two years later Moyer once again dashed Babb’s hopes of an emotional home-turf checkered flag. While his victory margin wasn’t quite as narrow, Moyer grabbed the lead on lap 72 when Babb slipped over the turn-one berm while negotiating lapped traffic and then had to repel several frantic late-race challenges from his hard-charging protégé.

Both Moyer and Babb will enter Victory Circle by Moyer cars in this weekend’s Illini 100. Moyer has already won six features this season – in Arizona, Florida and Arkansas – while Babb is winless and will see his first action since last month’s Georgia/Florida Speedweeks.

Babb, 38, holds the distinction as the only driver to finish among the top five in all three Illini 100s. His pair of runner-up finishes sandwich a fifth in 2009.

THE CHAMPS: The four former WoO LMS titlists who are current tour regulars – Eckert, Josh Richards of Shinnston, W.Va., Darrell Lanigan of Union, Ky., and Tim McCreadie of Watertown, N.Y. – share a common thread: none have ever won at Farmer City.

“It’s about time to change that,” Eckert said of his poor Illini 100 fortunes. “Last time we were there we weren’t too bad, but we blew up. Year before I had to change a motor before the feature.

“So as a car owner,” he joked, “I’m not really looking forward to going there. Hopefully we can change our luck.”

McCreadie, meanwhile, has a formidable performance record in the Illini 100. He didn’t compete in the 2009 event while recovering from a back injury, but he finished fourth (from the 20th starting spot) in ’08 and third (from 17th) in ’10.

KNOCKING ON THE DOOR: The only driver who has led at least one lap in each of the Illini 100s is Brian Birkhofer of Muscatine, Iowa, who will make his 2012 season debut this weekend.

Birkhofer appeared to be the dominant force in the 2008 event when he grabbed the top spot on lap 10, but he caught a rut in turn four and spun out of the lead – and the race – on lap 50. He came back to lead the first 93 laps of the 2009 race before Shane Clanton of Fayetteville, Ga., slipped by to take the win and leave Birky second, and in ’10 he nosed into the lead for laps 44-46 but settled for a fourth-place finish.

ROOKIE TO WATCH: For Brandon Sheppard, the Illini 100 could serve as a springboard in his pursuit of the 2012 WoO LMS Rookie of the Year award.

Sheppard, 19, of New Berlin, Ill., is eyeing the national’s top-rookie honor – and he’s off to a decent start, entering this weekend’s competition with one top-10 finish and ranked 11th in the points standings. There’s also no track on the series schedule that he knows better than Farmer City, a quarter-mile oval where he outdueled Babb to win a DIRTcar Summer Nationals event last year.

The son of veteran DIRTcar UMP Late Model racer Steve Sheppard Jr. has entered all three previous Illini 100s. He didn’t qualify in 2008 and ’09, but he finished 21st in ’10 as a 17-year-old high-school junior.

Bub McCool of Vicksburg, Miss., who will enter the Illini 100 for the first time, currently leads the WoO LMS Rookie of the Year battle and is sixth in the overall points standings. Sheppard is second in the rookie race, followed by Jared Hawkins of Fairmont, W.Va., Kent Robinson of Bloomington, Ind., Billy Moyer Jr. of Batesville, Ark., Jack Sullivan of Greenbrier, Ark., and Greg Johnson of Bedford, Ind.

Hawkins, Robinson, Moyer, Sullivan and Johnson have never entered an Illini 100, but only Hawkins will be making his first career start at the track this weekend.

INFO: This year’s Illini 100 weekend will also include an open practice session from 6-9 p.m. on Thurs., March 29; a $5,000-to-win DIRTcar UMP Modified event (heats on Fri., March 30, and B-Mains and 50-lap feature on Sat., March 31); and racing for Farmer City’s weekly support classes. The DIRTcar UMP Pro Late Models, Street Stocks and Hornets will run complete programs on Friday evening, and the Pro Late Models and Street Stocks will return on Saturday night to battle in regular racing cards.

Pit gates are scheduled to be unlocked at 4 p.m. for Thursday’s practice and 12 noon on Friday and Saturday, with hot laps set to start at 6:30 p.m. on Friday and 5 p.m. on Saturday and qualifying to immediately follow.

Illini 100 ticket prices (reserved and general admission) are $15 (Friday) and $30 (Saturday), with children’s tickets (ages 12-and-under) priced at $5 (Friday) and $15 (Saturday). Pit passes are $25 on Thursday, $30 on Friday and $40 on Saturday with a two-day band available for $65 and a three-day band (including Thursday’s practice) offered for $85. DIRTcar members receive a $5 discount on pit-admission packages.

With the deadline for purchasing tickets in advance now passed, all tickets sold at the track will be general admission.