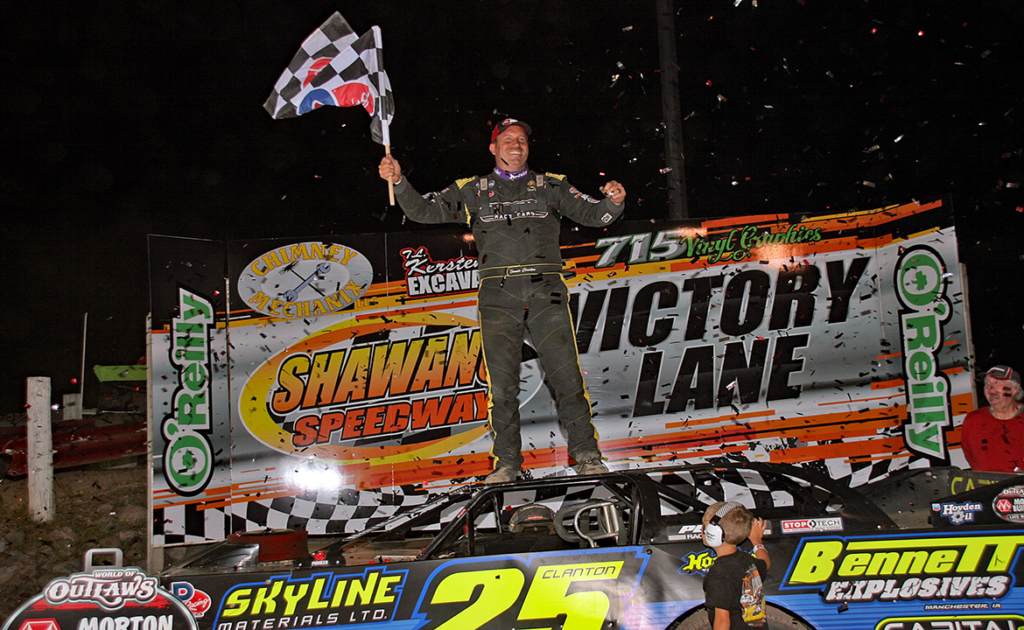 Just 17 days after getting his first World of Outlaws Morton Buildings Late Model Series win for his new team at Skyline Motorsports, Shane Clanton has done it again.

Leading all but one lap in the Sundrop Shooutout at Shawano Speedway on Tuesday night, the Zebulon, Georgia-native did what he hasn’t done since his last Series win at Ogilvie Raceway earlier in July – outrun the 15-time World of Outlaws winner this year, Brandon Sheppard.

“It was phenomenal from the word ‘go,’” Clanton said. “We hot lapped well, we qualified well, we heat raced well and then we Feature raced well. To have a night like tonight feels really good.”

In what was almost a perfect event, “The Georgia Bulldog” set quick time in Qualifying to pick up his second PFC Brakes Fast Time Award of the season, setting him up for a win in Drydene Heat Race #1 and a third-place redraw. It only took 1.5 laps of the Morton Buildings Feature to make the move on then-leader Boom Briggs and Chase Junghans for the top spot, as Clanton got a great run out of turn two after sticking to the very bottom line in turn one and launched his car down the backstretch to grab command of the race.

“I was trying to go anywhere I needed to go,” Clanton said. “I passed a couple of cars on the outside, and I thought I could get up there and go, but I was afraid that it might hurt my tires up there. So, I just stayed on the bottom and made it pull hard leaving the corner and it worked out.”

But Clanton’s work was only getting started. Sheppard was a man on a mission to get that 16th win of 2019 and first at the Shawano County Fairgrounds. Passing one car every other lap from his sixth-place starting spot, Sheppard used the high line to advance to the runner-up spot by lap eight.

“That actually wasn’t the plan. My plan was to run just a few laps up top, pass a few cars and get down to the bottom,” he said. “I just felt pretty comfortable up there, and the bottom of the racetrack – everybody was in it.”

The gap Sheppard walked into between he and Clanton at that point was growing, which looked massive on the half-mile of Shawano. Clanton’s lead stretched to nearly three seconds at one point before Sheppard got into clean air.

Equipped with that 900HP Durham Racing Engine under the hood, the Rocket Chassis house car turned its fastest lap of the race immediately after clearing Chase Junghans for second. Sheppard locked onto his target of the black-and-blue #25, a half-straightaway ahead, and turned on the Rocket boosters, closing the gap to just over 1.5 seconds by lap 20.

Sheppard continued to hammer the cushion until just after the halfway point, when he suddenly switched to the popular bottom lane through the corners and cut the deficit to just .7 seconds. But the leaders were deep into lapped traffic, and it only took two corners of racing behind a slower car for Sheppard to lose a bit of ground he gained and move back up to the top.

“I just couldn’t really run consistent laps down there because I was so used to running the top and I had my tires hot,” he said. “When I got to second, I figured Shane wasn’t going to slip up out of the bottom, so my only shot to pass him was going to be to ring the top, and that’s what I did.”

“The top side definitely faded a bit toward the end there, but we were able to maintain and get a few spots.”

Through the final 15 laps of the caution-free event, Clanton made perfect moves in traffic to keep Sheppard at bay, always at least one full second behind. By the time the checkered flag fell over him for the third time this season, his advantage over the Rocket1 Racing car was back to where it was originally – 2.7 seconds.

“It’s a testament to this crew,” Clanton said. “We worked all day today to rebuild this thing from last night.”

Garnering his eighth top-five finish of the season, Clanton is now tied with leading Rookie of the Year contender Ricky Weiss for second in Series points. Things are really rolling smooth for team Skyline.

Northern regional veteran Jimmy Mars once again tied his best World of Outlaws finish this season on Tuesday night, grabbing the final podium spot to the inside of Junghans with two laps remaining.

“Chase was still up on the top, and I was keeping my fingers crossed that he was not going to move down and give up on the top,” Mars said. “He stayed up there and I found a little bit more speed on the bottom.”

Racking up his third third-place finish of the season against the Outlaws, Mars had actually been struggling with equipment failures in his recent starts. But, “The Iceman” and his crew worked hard all week to correct the problems and were able to bounce back with a strong finish in the end.

“We had been having some electrical problems and ignition problems,” he said. “We were switching a bunch of stuff, trying to get it to react how it needed to again. I don’t know what was going on, and it was puzzling at first, but we’ve got it all figured out.”

The Outlaws are ready to take on Cedar Lake Speedway in the 32nd annual USA Nationals this coming Thursday night, August 1. A three-day racing extravaganza, this event culminates with the 100-lap, $50,000-to-win race on Saturday night that promises to bring the crowd to their feet every year. Don’t miss a minute of the action – stream it live on DirtonDirt.com!