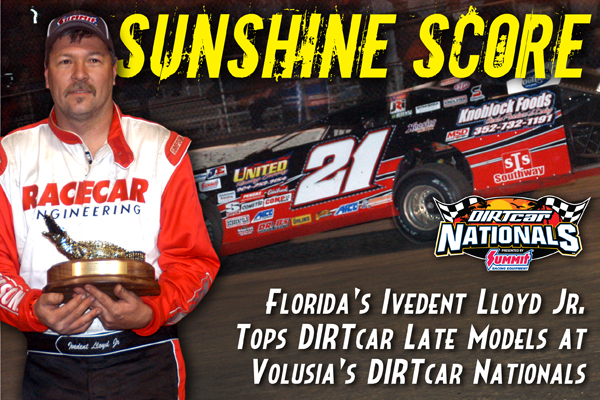 The 47-year-old veteran from Ocala, Fla., authored one of the drives of his career, turning back a field filled with national stars to win the 30-lap DIRTcar Late Model A-Main that opened the full-fender portion of the 43rd DIRTcar Nationals Presented by Summit Racing Equipment.

An accomplished Sunshine State racer who has won often in local and regional competition at the half-mile oval, Lloyd became the first driver from Florida to capture a dirt Late Model feature during the DIRTcar Nationals by Summit since Jacksonville’s Earl Pearson Jr. topped a DIRTcar-sanctioned event on Feb. 10, 2009. He earned $7,000 for his efforts.

“This is the biggest win,” said Lloyd, who has driven Late Models on both dirt and asphalt for three decades. “There’s races that pay more money, but this is by far the career-topper, to win this. To have all these guys here and race these guys, it’s neat.”

Lloyd started from the outside pole and led every circuit but was chased throughout the distance by Brady Smith of Solon Springs, Wis., who drew within a couple car lengths of the leader several times in the closing laps before settling for second place.

Eric Wells of Hazard, Ky., finished third after starting from the pole position, showing he’s primed to reprise his head-turning DIRTcar Nationals by Summit performance of a year ago. Fifth-starter John Blankenship of Williamson, W.Va., slid into fourth place on lap 14 and finished there and Shane Clanton of Zebulon, Ga., slipped backward from the third starting spot to finish fifth.

Lloyd’s victory was his first-ever during the DIRTcar Nationals by Summit, an ultra-competitive mid-winter meet that he doesn’t annually enter.

“We usually shy away from here during Speedweeks strictly because I can race for two months on the abuse you put on a motor here in a week,” admitted Lloyd, who operates a machine shop in his hometown of Ocala, about 50 miles west of VSP. “But with the new motor (his partner, J.B. Harris, obtained a Race Engine Design powerplant for the 2014 season) we wanted to come over here and race some.”

The decision to make an assault on Volusia paid off – after Lloyd stuck to his guns on tire choice, of course.

Lloyd’s strategy for the A-Main? “Just not get beat on tires like I have been all weekend,” he said, referring to his runs the previous three nights in World of Outlaws Late Model Series events at Bubba Raceway Park in Ocala, Fla. “We made our decision after the heat race was over based on what happened to us the last three nights. We decided to stay with (the tires) we were on and just go at it and live or die by it.”

Perching his Snow Brothers-built car on the outside of the fast D-shaped track, Lloyd kept the field at bay from start to finish. Smith was well within striking distance over the final 10 laps, but Lloyd didn’t flinch.

“We know this track well as far as where to drive around the track,” said Lloyd. “J.B. was giving me signals, so I knew I had a little bit of room and just tried to make good laps. That’s all you could do – make good laps and not hit a hole wrong and get yourself up in the cushion.”

Smith, 36, was satisfied to continue his stretch of strong Speedweeks results, adding a runner-up finish to his first-, second- and third-place runs over the previous three nights at Bubba Raceway Park.

“We certainly didn’t change much (for the A-Main), but we made our car just a little bit too tight,” Smith, who started fourth, said of his Rocket machine. “I didn’t expect the conditions to stay this fast either, so maybe we misjudged the racetrack too.

“I could see (Lloyd) was getting tighter down (in turns three and four) and I thought that’s where I might be able to make my move. But the time when he made the biggest mistake I also made a mistake, so we had to settle for second.”

Just one caution flag slowed the event, on lap seven when Mike Marlar of Winfield, Tenn., stopped in turn four with mechanical trouble.

With 40 cars signed in for action, group qualifying was utilized to set the starting lineups for four heat races in the first of three DIRTcar Late Model programs during the DIRTcar Nationals Presented by Summit.

The DIRTcar Nationals Presented by Summit continues on Tuesday night (Feb. 18) with another DIRTcar Late Model program topped by a 30-lap A-Main. The UMP Modifieds will also compete in triple features to close out the division’s week-long meet.

BARBERVILLE, FL – Feb. 17, 2014 – The World of Outlaws Late Model Series is idle until Thursday night, but most of the Outlaws are racing tonight in the DIRTcar Racing-sanctioned opener of the 43rd DIRTcar Nationals Presented by Summit Racing Equipment at Volusia Speedway Park.

A 30-lap A-Main paying $7,000 to win is on tap this evening — and fans can watch all the action live by purchasing a DIRTcar Nationals video subscription at www.DIRTVision.com.

Lloyd was chased throughout the distance by Brady Smith, who drew within a couple car lengths several times but settled for second place, 0.346 of a second behind at the checkered flag.

8:35 p.m. – Eric Wells, Ivedent Lloyd Jr., Shane Clanton and Brady Smith were victorious in the four heat races. Clanton was the lone group fast-timer to advance forward from the fourth starting spot to capture a heat…. Wells struggled for the past three nights in WoO LMS action at Bubba Raceway Park, but he his triumph in the first heat seemed to indicate that he’s recaptured the form that made him a breakout star of last year’s DIRTcar Nationals. He led two features during last year’s meet and finished as high as fourth…. Ocala, Fla.’s Lloyd was strong in the second heat, beating Pennsylvania’s Gregg Satterlee to the finish line to give his homestate fans something to cheer about…. Brady Smith continued to flex his muscle in the Sunshine State, transferring his strength at Bubba Raceway Park (consecutive finishes of first, second and third, giving him the WoO LMS points lead) to Volusia with a triumph in the fourth heat. His 3.693-second margin of victory was the largest of the heats…. Overall fast qualifier Billy Moyer failed to transfer after hopping the cushion in the second heat and finishing sixth…. Dennis Erb Jr. slowed on the final lap of the fourth heat and missed the cut….

7:45 p.m. – Billy Moyer kicked off the Late Model portion of the DIRTcar Nationals by Summit by blazing around the half-mile oval in 15.352 seconds, giving him the fastest overall lap of the group qualifying session. Other group fast-timers were Kyle Bronson (15.597), Shane Clanton (15.517) and Tyler Bruening (15.819).

With a four-car inversion for the four 8-lap heat races, the group fast-timers will start their respective heats from the fourth starting spot. The top four finishers in each prelim will move on to the 30-lap A-Main.

Three B-Mains for the UMP Modifieds, which will run their headline $5,000-to-win ‘Gator Championship’ event tonight, are currently underway. The Late Model heats will follow.

6:55 p.m. – Hot laps are underway on the half-mile Volusia oval for the first of three consecutive nights of DIRTcar Racing-sanctioned Late Model racing. A total of 40 cars are signed in for tonight’s competition, which will include group qualifying to set the lineups for four heat races.

Eight drivers who have plans to follow the World of Outlaws Late Model Series in 2014 are in action tonight, including Darrell Lanigan, Shane Clanton, Rick Eckert, Tim McCreadie, Eric Wells, Morgan Bagley, Chub Frank and rookie contender Chase Junghans. Four other drivers who could end up being World of Outlaws travelers this season — Brandon Sheppard (subbing for the ailing Josh Richards in the Rocket Chassis house car), current points leader Brady Smith, Jack Sullivan and Frankie Heckenast Jr. — are also among the entrants.

Several drivers are either in the pits and sitting out tonight’s program or plan to go racing later this week, including Clint Bowyer Racing teammates Steve Francis and Don O’Neal; Floridian Mark Whitener, who will drive the Warrior Chassis house car starting on Wednesday night; Clint Smith; Tim Fuller; Jimmy Owens; Dale McDowell; and Raymond Merrill (whose car is actually being driven tonight by Jack Sullivan, whose effort is sponsored by Merrill).