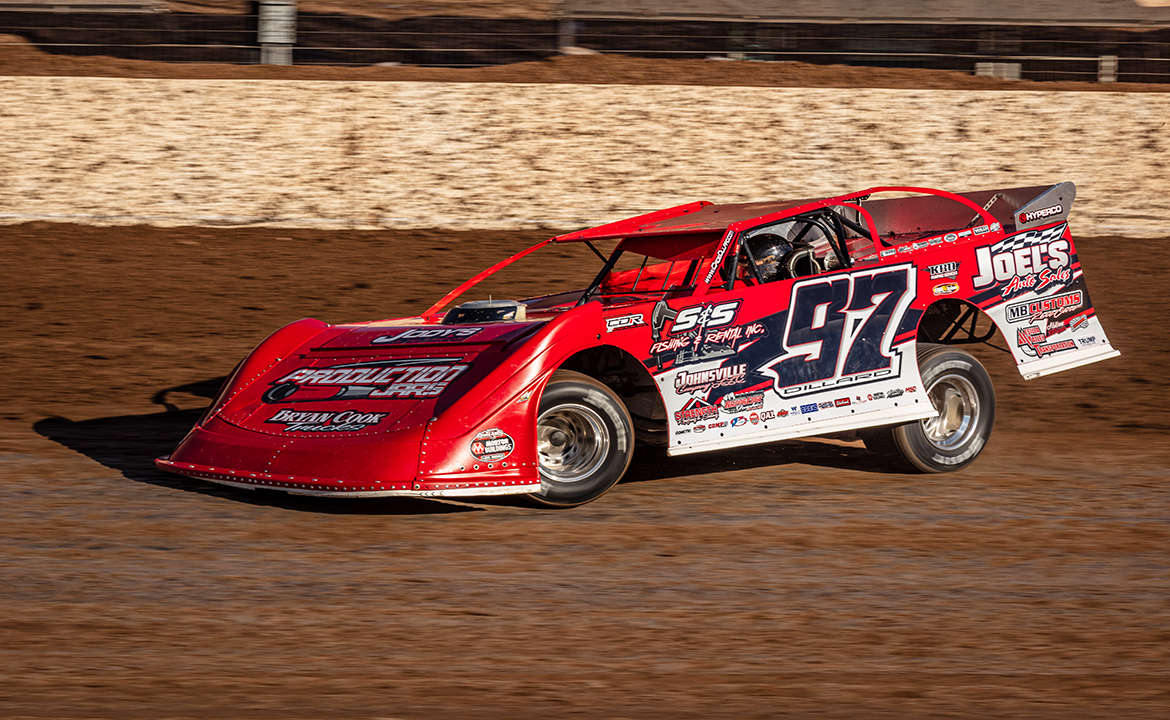 Adam Mollenkopf Photo
Louisiana Racer Conquered World of Outlaws Stars in New Mexico, Can He Do It Again This Week at Volusia Speedway Park’s DIRTcar Nationals?
By Jordan DeLucia February 11, 2020 at 3:42 pm |

BARBERVILLE, FL – It’s now been over a month, but the jubilation from World of Outlaws Morton Buildings Late Model Series sophomore campaigner Cade Dillard still hasn’t left his side from the night he scored the biggest win of his young career, defeating stars like defending champion Brandon Sheppard, Chris Madden, Scott Bloomquist and Darrell Lanigan.

“I [still] don’t really know how to put it into words,” he said. “The support from everybody… the calls, the texts, Facebook posts and comments, even on the local radio station, they were wowed with it all. I don’t think I could have responded to everybody, it was unreal, honestly.”

He did it in style, driving around two-time and defending Series champion Sheppard on a restart with nine-to-go to win Vado Speedway Park’s inaugural Battle at the Border finale, worth $15,000 and his first-ever national Dirt Late Model tour victory. That night, he also bested the likes of three-time DIRTcar Summer Nationals champ Dennis Erb Jr., three-time Series champ Lanigan and National Dirt Late Model Hall-of-Famer Bloomquist – some of the legends he grew up watching rule the circuit.

“I’ve watched these guys for a long time, back when I was Modified racing, and dreamt of the day I’d get to race with them. Never in a million years did I think something like this would happen for me,” he said.

This week, Dillard has the chance to back up that spectacular win with another at Volusia Speedway Park for the 49th DIRTcar Nationals presented by Bozard Ford – a track where he was only able to muster a 13th-place finish at best, and only qualify for two of the five total Late Model Features in his first-ever visit last year. But that was one year ago, and his notebook has gotten thicker since then.

“I’m definitely excited to get back to Volusia,” Dillard said. “I know we struggled there last year, but I’m not going to let that get us down. I feel like we’ll have a good car there.”

Now, the Robeline, LA-driver finds himself in a much better position in terms of experience, largely due to his massive improvement on the road with the Outlaws over the 2019 season.

He attributes a lot of that improvement to his crew and car builder Jimmy Mars from Menomonie, Wisconsin. Dillard’s 15+ years of experience racing Modifieds also brought him a lot of time behind the wheel, but said his crew’s efforts in the pits has had just as much to do with their newfound success.

“Jimmy Mars and all those guys [at MB Customs] build a really good car, there’s just not a lot of them out there. To a certain degree, that might help us. We don’t worry about what anybody else is doing, we just work on our own stuff and do what works for us. It’s slowly paying off,” he said.

It was only a matter of time last season before the good finishes started coming, and his first positive sign appeared at Davenport Speedway in Iowa on July 24, where he completed the podium behind Jimmy Owens and Sheppard.

His next came just a short time later at Cedar Lake Speedway’s USA Nationals, where he led the first 60 laps before giving up the lead and fading back, settling for a 13th-place finish. Still, Thriller learned a lot that night. Against some of the best of the best in the national ranks, Dillard really showed his signs of improvement.

“After Cedar Lake, that was a pretty tough one we lost last year after leading so many laps. Just from inexperience, I just ran too hard, too early, I suppose.”

After the win at Vado last month, Dillard took a moment to reflect back on a time when he thought his racing days may have been numbered.

“If you had asked me four or five years ago where I see myself, I didn’t even think I’d have the opportunity to still be racing. It got to the point where I was just doing it on my own and didn’t have the money to get up-and-down the road… couldn’t even pay the electricity bill at my house,” Dillard said.

“I got to the point where 2015 was going to be my last year. Shane Sprinkle [S&S Fishing & Rental] came along, never met him in my life, and asked if I wanted to drive for him. It’s funny how things work out. God definitely has a plan.”

Now, Dillard turns his attention to The World’s Fastest Half-Mile. He said he’s confident in his crew and his newfound driving skill with his full-fendered ride, and looks forward to making even more improvements this weekend as he makes the trip to Volusia for the second time in his career.

“I’ve dreamt of having this opportunity for a really long time. I finally have it, and everything’s just been falling our way. I’ve got good crew guys, a list of good sponsors that believe in me and make this possible for us to get up and down the road. It’s just a huge blessing for me.”

THIS WEEKEND AT A GLANCE

WHEN & WHERE
Wednesday-Saturday, February 12-15 at Volusia Speedway Park in Barberville, Florida

TICKETS
Tickets can be purchased at the gate on race day, by calling 844-DIRT-TIX or online at dirtcarnationals.com.

AROUND THE TURN
After four straight shows in Florida, the Outlaws get a few weeks off before a weekend in Tennessee with visits to Duck River Raceway Park on March 6 and Smoky Mountain Speedway on March 7.

2020 STATS
There have been 3 World of Outlaws Morton Buildings Late Model Series Feature events this season.