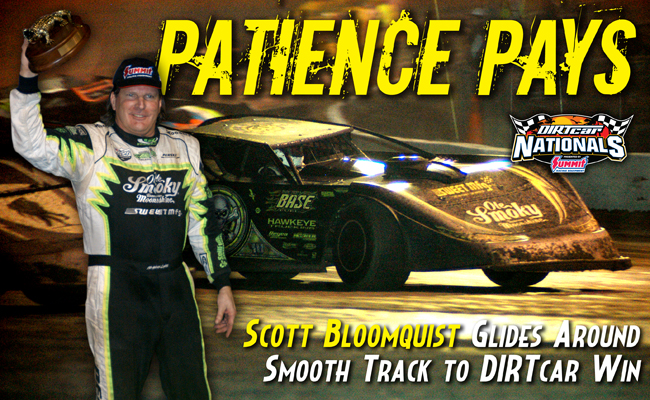 Making his first start in a new car he designed in a collaboration with noted parts manufacturer Randy Sweet, the 50-year-old superstar from Mooresburg, Tenn., mastered the sprawling half-mile oval to capture the 40-lap A-Main that closed the DIRTcar Late Model portion of the 43rd annual DIRTcar Nationals Presented by Summit Racing Equipment.

Bloomquist swept past fellow Hall of Famer Billy Moyer of Batesville, Ark., for the lead on lap 20 and never looked back in the caution-free event. He pocketed $10,000 for his ninth career win during the DIRTcar Nationals by Summit.

“The racetrack was awesome tonight,” said Bloomquist, who began the six-night full-fender meet at VSP with finishes of sixth (Monday) and fifth (Tuesday). “It’s a little different when you just don’t sit out there and have everybody hold it on the floor all night. You gotta have a little bit of foot, a little bit of patience.”

Bloomquist showed plenty of those traits on his way to crossing the finish line 1.497 seconds ahead of Chickamauga, Ga.’s Dale McDowell, who made a strong advance from the 14th starting spot. McDowell reached second on lap 30 and briefly closed on Bloomquist before losing ground and settling for runner-up money.

Eric Wells of Hazard, Ky., who started fifth, climbed as high as second on lap 24 before being overtaken by McDowell six circuits later and placing third – his second podium finish in the week’s three DIRTcar Late Model events. Darrell Lanigan of Union, Ky., started and finished fourth and Moyer faded to fifth at the checkered flag after starting from the outside pole and leading laps 1-19.

In a race completed in a rapid 12 minutes, 35.182 seconds, Bloomquist started third and chased Moyer and polesitter Rick Eckert of York, Pa., through the early circuits. Bloomquist wrestled second from Eckert on lap 15 and quickly ran down Moyer.

With a burst off the inside of turn four, Bloomquist shot past Moyer to assume command for good as lap 20 was scored.

“We moved around and just tried to find where we could work well on the racetrack,” said Bloomquist, who won an A-Main during the DIRTcar Nationals by Summit for the fourth consecutive year. “I really felt great all over the racetrack, but finally we got to the middle of (turns) three and four. It looked like not too many guys could carry that much speed through the middle.

“(Moyer) looked like he was just kind of fading and we were coming to him,” he continued. “He might have went with a little different tire combination. But I knew all the guys up front had the same thing, so we just had the superior piece and I felt like we drove a pretty good race.”

Putting the new car in Victory Lane in its debut gave Bloomquist a definite confident boost.

“We finished this car while we were racing in Tampa (last week at East Bay Raceway Park),” said Bloomquist. “We’ve had a pretty rough two-week period, so to get the car finally done and get out here – this is the first laps on it this week – we really know we got something going on with this race car. I think there’s gonna be a lot of victories to come.”

McDowell, 47, appeared primed to stop Bloomquist’s march after surging past Lanigan and Wells to claim second place on lap 30. The veteran drew his Team Dillon Warrior within a half-second of Bloomquist before his bid stalled.

“I got to gaining a little bit there but just got to turning hard,” said McDowell, who was chasing his first DIRTcar Nationals by Summit victory since the 1999 finale. “I got kind of balanced out the last five, six laps, and got a little bit tight, and Scott was good rolling right through that middle. We’ll try to fix that problem and see if we can’t get up front the rest of the week.”

With 42 cars signed in for action, group qualifying was utilized to set the starting lineups for four heat races.

Moyer registered the fastest overall qualifying lap at 15.999 seconds – the second time in three nights that the veteran was quickest overall. Other group fast-timers were Brian Shirley of Chatham, Ill. (16.320), Sheppard (16.146) and John Blankenship of Williamson, W.Va. (16.153).

Heat winners were Eckert, Moyer, Bloomquist and Lanigan. The B-Mains were captured by Jared Landers of Batesville, Ark., and Vic Coffey of Caledonia, N.Y.

The DIRTcar Nationals Presented by Summit continue on Thursday night (Feb. 20) with the first of three straights of competition featuring the World of Outlaws Late Model Series. A 50-lap WoO LMS A-Main paying $10,000 to win will top the program, which also includes a 30-lap feature for the Super DIRTcar Series Big-Block Modifieds.

Florida’s Ivedent Lloyd and Delaware’s Kenny Pettyjohn were victorious in the first two nights of action. Both were first-time victors at the DCN, which fans can watch live tonight by purchasing a DIRTcar Nationals video subscription at www.DIRTVision.com.

10:45 p.m. – Scott Bloomquist is back at his trailer — probably looking to take a celebratory swing of Ole Smoky Moonshine — after winning the 40-lap DIRTcar Late Model finale.

Bloomquist blasted past Billy Moyer for the lead on lap 20 and never looked back in the caution-free event. He crossed the finish line 1.497 seconds ahead of 14th-starter Dale McDowell, who reached second on lap 30 but couldn’t challenge Bloomquist.

Eric Wells briefly climbed up to second place but settle for third in the final rundown. Darrell Lanigan placed fourth and Moyer faded to fifth.

9:40 p.m. –  With the completion of the twin 10-lap B-Mains — Jared Landers won the first over Bobby Pierce, Clint Smith and Morgan Bagley, and Vic Coffey topped the second over Kenny Pettyjohn, Brady Smith and Don O’Neal — the evening‘s 40-lap is all that is left for the DIRTcar Late Models.

The 30-lap DIRTcar Big-Block Modified feature is now on the track, with the Late Model headliner to follow.

8:55 p.m. – Four of dirt Late Model racing’s most accomplished veterans — Rick Eckert, Billy Moyer, Scott Bloomquist and Darrell Lanigan — scored victories in the 8-lap heat races…. Eckert dominated the first heat, beating fellow WoO LMS regular Eric Wells to the finish line by a commanding 3.326 seconds…. Moyer turned in the drive of the night in the second heat. Mired in fourth place heading to the two-to-go signal, he tossed his car to the outside and passed Dale McDowell and Casey Roberts that circuit and blasted by Mike Marlar for the lead on the final lap…. Bloomquist cruised in the third heat, beating Brandon Sheppard by 2.128 seconds…. Lanigan disposed of Tim McCreadie for the lead early in the fourth heat and went on to defeat his fellow WoO LMS traveler by 3.056 seconds…. Brady Smith, who has five consecutive top-three finishes in Florida Speedweeks action at Bubba Raceway Park and Volusia, failed to qualify in the fourth heat. He was battling Lanigan for second on the first lap when he got sideways in turn one and fell to sixth place before he recovered. He finished in that spot….

With a four-car invert, the group fast-timers will start fourth in their respective heats.

The last time there was three straight first-time Late Model winners during the DCN? That would be 1999, when Ray Tucker of Greensboro, N.C., Chub Frank of Bear Lake, Pa., and Rick Eckert of York, Pa., won the week’s first three events.

6:20 p.m. – Forty-two cars have been signed in for tonight’s action, setting up the largest car count so far this week. Drivers joining the action for the first time tonight are Clint Smith, Dale McDowell, Jared Landers and Tim Fuller.

Late Models are now rolling onto the half-mile oval for hot laps. Timed hot laps for the DIRTcar Big-Block Modifieds will then hit the track, followed by group qualifying for the Late Models.