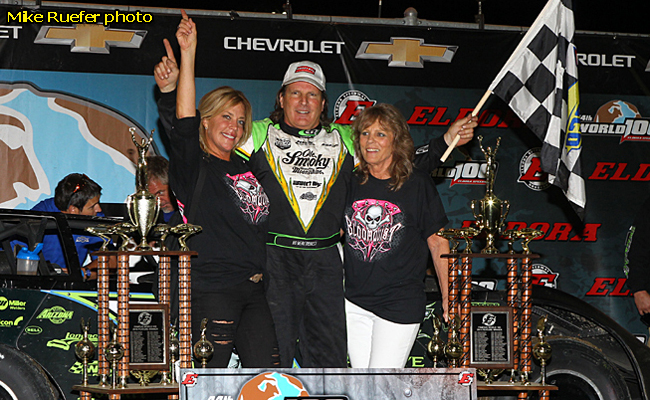 ROSSBURG, OH – Sept. 6, 2014 – Nothing could stop Scott Bloomquist from claiming his fourth World 100 trophy Saturday night at Eldora Speedway. Not a lap-19 penalty that dropped him from the lead to the tail of the field. Not a steady Dale McDowell looking for an Eldora crown jewel sweep. And not slower traffic during the race’s closing laps.

Bloomquist’s No. 0 Sweet-Bloomquist machine was unstoppable at the historic half-mile oval as it carried the National Dirt Late Model Hall of Famer through the field for a $47,000 victory in the 44th running of the DIRTcar UMP-sanctioned event.

“I believe everybody got to witness the fastest race car in the world right there,” Bloomquist, 50, of Mooresburg, Tenn., told the Eldora Speedway crowd, which for once was nearly unanimous in applauding a driver who usually polarizes fans. “We talked this week in the shop; I told everybody I was gonna win this race this weekend and here it is.”

Advancing from his fifth starting spot, Bloomquist first took the lead from McDowell on lap 19 only to be penalized for an unapproved window net and sent to the tail of the field when the caution waved on the following lap.

That only made things more interesting.

Bloomquist stormed back to the front and retook the lead from McDowell on lap 72 of the 100-lap race. He continued his torrid pace through the remaining distance, again knifing through traffic until he crossed the finish line with a half-track advantage.

McDowell of Chickamauga, Ga., settled for the runner-up finish while 22nd-starting Jimmy Owens of Newport, Tenn., made a late charge to finish third. Jason Feger of Bloomington, Ill., and Matt Miller of Whitehouse, Ohio, rounded out the race’s top five finishers.

Bloomquist was penalized for using a Lexan-supported window net. After opposing crew members protested that the piece could assist aerodynamics, officials ruled the window net was an unapproved device. It was removed from Bloomquist’s car and he was sent to the tail of the field for the restart.

That didn’t faze Bloomquist. Restarting in the 29th position, he quickly began his march back to the front. He worked his way into the top 15 by lap 35 and was up to eighth by halfway. He cracked the top five on lap 55 and after grabbing fourth a few laps later, was elevated to second when 21st-starting Mason Zeigler of Chalk Hill, Pa., spun while attempting to take the lead from McDowell on lap 61 and collected third-running Jimmy Mars of Menomonie, Wis.

Bloomquist made sure the Eldora crowd new his plan under the ensuing caution by pumping his fist and making the cowabunga hand signal out of the driver’s window of his race car as he drove down the front straightaway.

“The car was just so good and I was so confident,” said Bloomquist, who scored his sixth consecutive top-10 finish in the World 100. “I knew there was plenty of laps left and I knew the car would work anywhere on the racetrack. Anyone that would try to run the bottom like I did, they could get in there, but as soon as they’d throttle they’d push out of it, which would just leave me the whole racetrack.”

If not for Bloomquist, McDowell, 48, would have been the star of the show. Starting from the outside pole, he pulled his Team Dillon Racing Warrior ahead of polesitter Mike Marlar of Winfield, Tenn., on the start of the race and controlled the early laps.

He gave up the lead after a lengthy side-by-side battle with Bloomquist, but was quickly reestablished to the point after Bloomquist’s penalty. McDowell again pulled away through the race’s middle portions until Zeigler began making his bid for the top spot.

McDowell was given a brief relive when Zeigler got into turn three too hard on lap 61 and spun his machine to avoid making contact with the leader. But that only cleared the way for Bloomquist to move to second for the restart and to eventually take the lead 11 laps later.

In falling one position short of his second World 100 victory, McDowell, who claimed a $100,000 payday in Eldora’s Dirt Late Model Dream in June, missed out on becoming just the third driver to win both of Eldora’s crown jewel events in the same season.

“I think I overworked my tire running that high side,” McDowell said. “I was just free – just a little bit too free. But that’s part of it. We’ll go to work a little bit and try to come back here in June and repeat the Dream maybe.”

Bloomquist’s charge through the field was the main highlight on a night that featured plenty of passing around Eldora’s high banks. Besides the charges by Bloomquist, Zeigler and Owens, Terry Phillips of Springfield, Mo., charged from 17th to ninth, Shannon Babb of Moweaqua, Ill., advanced from 29th to 10th and John Blankenship of Williamson, W.Va., moved from 32nd to 12th.

The racy track surface didn’t go unnoticed by drivers, including the victor.

“This is the best Eldora I’ve ever seen,” said Bloomquist, who claimed his first World 100 trophy in 1988. “I gotta take my hat off for everyone that worked on (the track). You can see it’s from the top to the bottom wall. I know there was a few times I wasn’t sure if I wasn’t rubbing the inside wall with the left front.”

The main event was slowed by four cautions. The first was the lap-19 yellow that waved when Jared Landers of Batesville, Ark., slowed. Heat race winner Jackie Boggs of Grayson, Ky., slowed to bring out a lap-30 caution and Bobby Pierce of Oakwood, Ill., dropped from the fifth spot to cause a lap-53 yellow. The final caution was for Zeigler’s lap-61 spin that collected Mars.