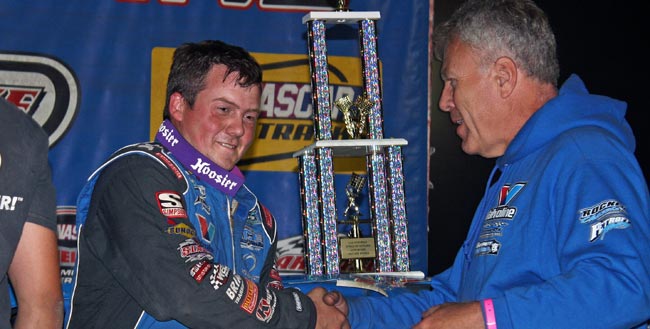 ONE YEAR LATER: Brandon Sheppard has good reason to be eagerly anticipating the World of Outlaws Late Model Series ‘Photobilly 50’ this Friday night (Sept. 13) at Belle-Clair Speedway in Belleville, Ill.

Indeed, Sheppard has demonstrated an uncanny knack for navigating the unique one-fifth-mile bullring, the smallest track the WoO LMS will visit this season. One year ago he conquered Belle-Clair to win his coveted first-ever WoO LMS A-Main when the national tour made its debut there, and on June 20 he reached Victory Lane again with a triumph in the track’s DIRTcar Summer Nationals event.

What’s Sheppard’s secret to success at the facility popularly known as ‘Belle Vegas?’ For the most part, it’s just a basic understanding of the intricacies of the tricky speedway.

“When you run at Belleville, it takes a different mindset about how you set your car up,” said Sheppard, who won the DIRTcar Summer Nationals championship for the first time this season and is closing in on his initial DIRTcar UMP Late Model national points crown. “You can’t be as tight (handling condition) as you are at a lot of other tracks. It has short straightaways and tight corners, so you gotta be ‘free’ and get in-and-out of the gas so you can get it turned and go back the other way real quick.

“And you can’t be afraid of being close to anybody,” he added with a smile, “because it’s definitely tight-quarters racing there. With guardrails on the inside and the outside, there’s not much room to operate. There’s no three-wide around that place.”

Sheppard noted that while real estate at Belle-Clair is hard to come by, that doesn’t mean passing is at a premium there as well. He expects plenty of action in the Photobilly 50, a $10,000-to-win/$1,200-to-start show run in memory of late track photographer Charles Haffer Jr.

“The first time I saw the place I was amazed with how small it was,” said Sheppard. “You can’t help thinking, How is this place gonna race good? I think a lot of the Outlaw guys were a little bit worried that it wasn’t gonna be racey when they first got there (last year) and saw the place.

“But it’s a racy little place. It definitely surprises people.

“The past three or four times I’ve been to Belleville they’ve been doing a great job with the track (surface),” he continued. “They’ve been keeping the track nice for us all night long. You can really race on it, and that’s a big reason why I’m looking forward (to Friday night).”

Sheppard also is pumped to return to the site of his milestone WoO LMS checkered flag, which he earned in impressive fashion last year driving the iconic Rocket Chassis house car No. 1 while its usual chauffeur, Josh Richards of Shinnston, W.Va., was off running on the NASCAR Nationwide Series. He set a new track record, won his heat and turned back several challenges to maintain the lead throughout the hyper-competitive 50-lapper.

“That’s definitely a memorable moment for me,” said Sheppard, who will be behind the wheel of his family-owned Rocket No. b5 at Belle-Clair (Richards returned to his father Mark’s house car this season). “To get that first one out of the way meant a lot. It gives you confidence because it lets you know that you can do it.”

With a star-studded roster of WoO LMS regulars, DIRTcar UMP standouts and well-known national names expected on Friday night (last year’s race drew 52 cars), Sheppard knows repeating will be difficult. But he hasn’t entered many events with a better feeling than he has for the Photobilly 50.

“We ran really good there at the Summer Nationals this year,” said Sheppard, who has won another WoO LMS A-Main since last year’s visit to Belle-Clair, capturing a USA Nationals preliminary event on Aug. 1 at Cedar Lake Speedway in New Richmond, Wis. “I felt the car we had there at Summer Nationals was even better than the night when we won the Outlaw race, so that really has me excited.

“But it’s gonna be like any race you go to – all the cards have to fall into place.”

ALWAYS EXCITING: For a St. Louis-area race fan, one thing is a near certainty: the WoO LMS Pevely Nationals on Saturday night (Sept. 14) at Federated Auto Parts Raceway at I-55 in Pevely, Mo., is a can’t-miss event.

Few tracks on the national tour’s schedule can claim to produce action as consistently thrilling as the high-banked, one-third-mile oval operated by NASCAR star Ken Schrader and Ray Marler. There have been six WoO LMS events contested at I-55 since 2005 and only one – the 2011 Pevely Nationals won by Josh Richards – did not feature an unforgettable battle for the checkered flag.

Last year’s World of Outlaws showdown at I-55 ranks as one of the most memorable of the lot. DIRTcar UMP stalwart Dennis Erb Jr. of Carpentersville, Ill., emerged triumphant in an A-Main that had the fans howling down to the final lap.

Much of the race’s 2012 excitement was provided by defending WoO LMS champion Darrell Lanigan of Union, Ky., who swapped the lead four times with Erb before making a go-for-broke late-race bid that left observers’ mouths agape.

In a scheduled 55-lap feature that was extended an extended circuit, to 56 laps, by a late caution flag that set up a green-white-checkered finish, Lanigan slid to the outside of Erb off turn two on lap 50 and pulled ahead down the backstretch. But Lanigan skated a bit too high between turns three and four and momentarily rode the outside wall with the right side of his car, damaging his steering and causing him to immediately fall to fourth.

Lanigan made his frantic lap-50 charge because he thought there were only two laps remaining when the race restarted on lap 48, prompting him to throw caution to the wind in hopes of overtaking Erb. He had to settle for a fourth-place finish – one of the most noteworthy fourth-place runs anyone authored on the 2012 WoO LMS.

While Lanigan won a record 15 WoO LMS A-Mains last year and leads the tour this season with 10 victories, don’t think for a minute that he’s forgotten about his near-miss in the ’12 Pevely Nationals. The speedway is one of the few that he’s yet to conquer in his career – second-place runs in 2005 and ’11 are his best finishes – so the hyper-competitive driver will be going all-out to right that missing notch on his resume.

Dirt Late Model Hall of Famer Billy Moyer and his son, Billy Jr., both from Batesville, Ark., are among the other drivers expected to enter the weekend doubleheader.

RUBBER: Both the Belle-Clair and Federated Auto Parts Speedway at I-55 WoO LMS events will be contested under the DIRTcar Hoosier tire rule. Three compounds – LM 20, 30 and 40 – will be permitted for use.

Fri., Sept. 13, at Belle-Clair Speedway in Belleville, Ill.: The Will-Call Window (for advance ticket buyers who need to pick up tickets) and the general-admission ticket booth will open at 3 p.m. CT. All pit passes will be sold at the rear pit shack, which opens at 12 noon CT.

General admission for Belle-Clair’s racing program, which also includes action for UMP Modifieds ($1,000 to win), is $30 with children 12-and-under admitted free of charge. Reserved seat tickets are available for $35.

Pit passes will be $40 (ages 13-and-up), $20 (ages 6-12) and free for children five-and-under. A special pit admission deal is available to DIRTcar UMP Modified teams in action: drivers and two pit crew members can purchas pit passes for $30 each.

Belle-Clair Speedway is located in Belleville, Ill., on the St. Clair County Fairgrounds, less than 40 minutes from St. Louis and just 50 minutes from Federated Auto Parts Raceway at I-55.

General admission is $30 and reserved seats are $32. Children 12-and-under will be admitted free of charge. Pit passes will be $40, but for the UMP Modified and Sportsman divisions a driver and two crew members can sign in together for $30 each.

Advance-sale tickets for both the ‘Photobilly 50’ at Belle-Clair and the Pevely Nationals at Federated Auto Parts Raceway are available for purchase on-line at www.worldofoutlaws.com/tickets or by calling 1-877-395-8606.

Federated Auto Parts Raceway at I-55 is located 30 minutes south of downtown St. Louis, off Pevely exits 180 and 178 of Interstate 55.