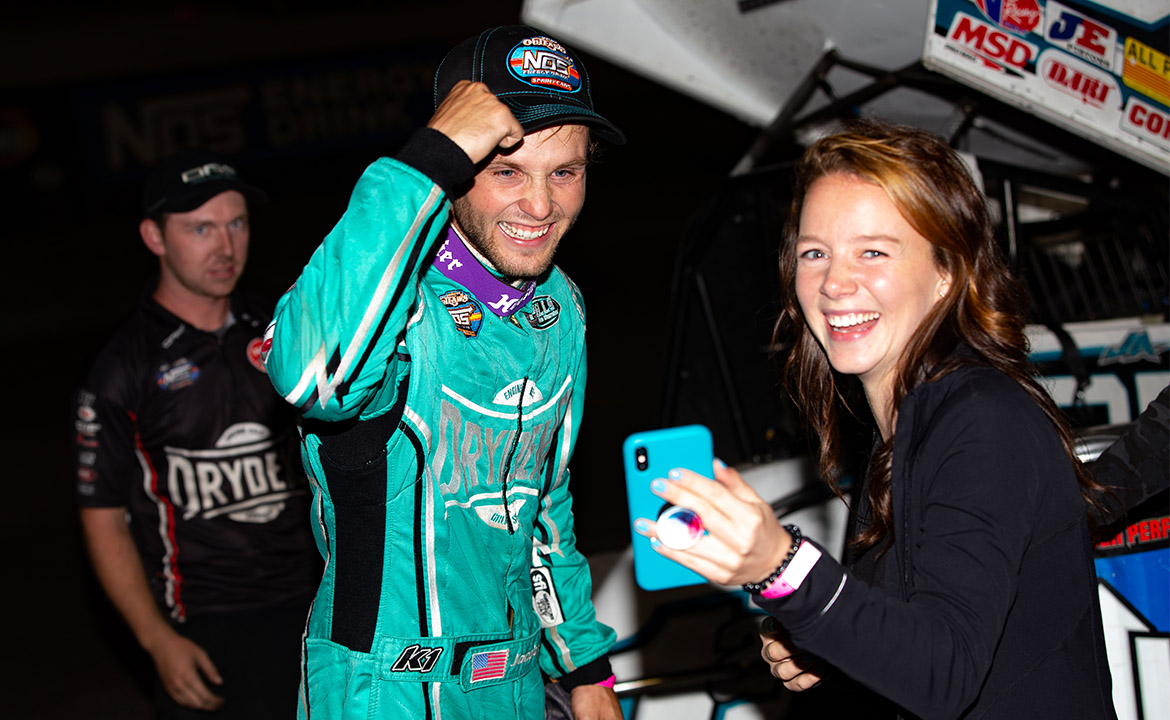 Trent Gower
Bobby Allen thrilled with son’s first win and growth of his Shark Racing team
By Nick Graziano | September 23, 2020 at 11:48 am

That statement cycled through Jacob Allen’s head on an endless loop while leading at Dodge City Raceway Park during the first night of the Boot Hill Showdown on Sept. 11.

He’d heard it several times before in his previous 358 World of Outlaws NOS Energy Drink Sprint Car Series starts. Yet each time it was a false promise.

Allen had held his first career World of Outlaws NOS Energy Drink Sprint Car Series career victory in his hands multiple times and each time watched it blow away like sand in the wind. Sometimes it was because of bad luck. Sometimes he just got beat straight up. And sometimes it was from his own doing.

Every loss, every heartbreak and every question of when he’d get his first win began to weigh on him. More than he showed publicly.

“That one thought of getting that first Outlaw win was so big to me,” Allen said. “Because I didn’t really grow up racing very much in PA. I ran my first real racing season of my life with the World of Outlaws. I had to learn so many different skillsets to get to that point. And it was like, even though I would have good moments in racing and good finishes that I’d be happy about, I would sit there at the banquet, or throughout the whole entire year and the off season, I would just think about everything in my life and it felt like that was always on my mind no matter what was going on. I was thinking about that literally every day at some point of the day.”

His father and car owner, Sprint Car Hall of Famer Bobby Allen, saw the burden Jacob had put on himself to win. They’d talked about it. Even discussed if racing Sprint Cars was the path he should be on.

“Sometimes he would get down,” Bobby Allen said. “I think last year or the year before he would get down and say, ‘Logan (Schuchart) can make a living out of this. It’s just not cut for me.’ Well, I knew one thing. I talked to him about it. I said, ‘Jacob, you have speed. You just need to get to the next level. The next thing and do whatever. It just takes time.’”

While he’d get down on himself, Jacob’s passion for racing never faltered. He took time during the off season at the end of last year and during the two months off at the beginning of 2020 to self-reflect and think about what he could do to improve himself. And not just as a driver. He limited his drinking, started eating healthier and began working out.

The results have shown on and off the track. On track, he’s up front on a regular basis. Off track, a smile rarely leaves his face.

As he said on the Open Red podcast, he’s never met this new Jacob Allen before.

Bobby Allen has noticed the change in his 26-year-old son, as well.

“I would say he was like any other kid that age, they would drink whenever and things like that,” Bobby Allen said. “But he wanted to be focused all of the way. It seems like it cleared his mind up. He can think clear and put his mind all on that. Plus, he likes riding his bicycles and doing jumps and stuff like that. All of that stuffed helped him get into shape better and feel better. When you’re in good shape and stuff you’re thinking better and clear. I think that definitely helped him.”

The questions of when Allen would get his first win came more frequently this year because of that. However, it was a welcomed side effect because that meant Allen was putting himself in contention to win more regularly. Drivers couldn’t help but take notice of that, too. During a DIRTVision Fast Pass Dash draw at Huset’s Speedway, Kyle Larson joked with Allen that he’s had to of been in every Dash this year because he felt like he always sees him at the draw.

While Allen had his Hall of Fame father and nephew Logan Schuchart to lean on for advice, drivers like Larson helped give him a new angle of how to look at his driving.

“I’m always talking with Sheldon Haudenschild (who has five wins this year),” Allen said. “We’re always talking about things. I just hear his opinions on when he’s up front. The things he’s thinking about and when he’s out front leading a race. Brad Sweet has been one of those guys who, it’s kind of the same way. He’ll talk about his experiences and I’ll take ones from that. And when we were at Knoxville for ‘The One and Only’ race, I was hanging out with Brad and (Kyle) Larson a little bit and Larson made a little bit of a comment of when he’s watched me on DIRTVision the one time we were at Lincoln and I was up front. And another race he saw me leading when I got to lap traffic and how I approached lap traffic.

“It’s kind of made sense what he had saw in me because I could relate to what he was saying… It’s always like when you hear it from my dad and Logan, I’ve been hearing their advice for so long and it’s always very helpful, but I feel like myself, Logan and my dad all have the same mindset. So when you hear different insights from different people you can take a little bit from each of that and kind of put it into your own program on seeing maybe how it can help you out and that’s kind of what I did with those guys. And I was thankful that they respect me enough to even talk about those things to help me out.”

He put Larson’s advice to use while leading at Dodge City. Upon approaching lap cars, he made quick work of getting by them to not lose time and allow the cars behind him to close in. It proved beneficial with 20 laps to go in the Feature as he sped by the slower car of Bill Rose, who washed up the track the second Allen passed his and almost made contact with second-place-running Schuchart.

Those words began to cycle in Allen’s head shortly after as the laps faded away and the white flag waved. About exactly a year ago to that day, Allen was leading on the final lap at the Stockton Dirt Track and had a motor issue on the final lap. Flashbacks of that nightmare popped in his head but were quickly erased with the thought of, “You can do this. You can do this.”

With the entire crowd at the Kansas track and thousands of race fans around the world on their feet and cheering, Allen finally drove his Shark Racing Drydene #1A past the checkered flag to claim his first World of Outlaws victory – with teammate Schuchart finishing second behind him.

“It feels awesome,” Allen said about getting the win. “Just finally can get over that hump and that struggle of getting a first win. I can finally have a clean slate and focus on other things.

“Now that I’ve built a better skill set with my racing and more of an understanding of what it takes to be a winner and accomplishing that, I feel like I can just move on to the next point in my racing career and create more wins for myself and just keep building on that confidence of things. I look forward to that and I’m excited for that. It feels like a fresh start for myself.”

As happy as Allen was, his father shared that joy with him.

“I was definitely really excited for him and me,” Bobby Allen said. “And to run first and second, too. It was really exciting. It’s been a while coming. Everything fell into place. He did a good job. He’s been doing a good job lately.”

The win was not only a point of growth for Allen, but for the entire Shark Racing team. Since joining the tour full-time in 2014, Shark Racing has evolved from a team first focused on making races to a team capable of winning every weekend with both cars.

“It’s been a growth,” Bobby Allen said. “When we started this thing, each guy had one motor each. They could only run a few laps and pull out. They weren’t making any money. Then it got to where now, we had Jennifer Marshall help out a few years ago. Then Drydene helped a little bit last year and this year Drydene came across the board as a bigger sponsor. And we hope we’re doing a good job. We think we are.

“Let me tell you something. These boys and my crew, they’re the first ones out in the parking lot in the morning and work hard all day long. That’s a big plus too.”

Since winning at Dodge City, Jacob Allen has collected a top-five and two top-10s in three races. He’s currently eighth in the championship points – the highest he’s ever been in his career. His best finish in points up to this point has been 11th.

With a win finally under his belt, Allen said he feels refreshed. The weight is off his chest and he’s thrown the monkey off his back. He’s a new driver with a new level of confidence. Win number two can’t come soon enough.

He’ll look to use that winning confidence this weekend when the World of Outlaws compete at Plymouth Speedway on Thurs., Sept. 24, then Wayne County Speedway on Fri., Sept. 25 and at Lernerville Speedway on Sat., Sept. 26. Get tickets by clicking here.

If you can’t make it to the tracks, you can watch all three races live on DIRTVision.