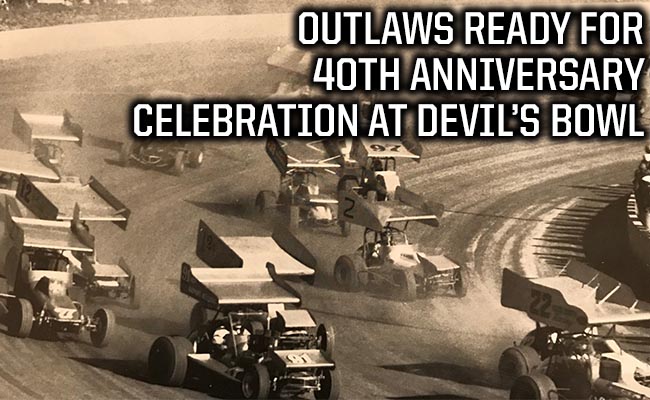 CONCORD, NC – The World of Outlaws Craftsman Sprint Car Series kicks off its 40th Anniversary celebration at the Series birthplace, Devil’s Bowl Speedway, during the Texas Outlaw Nationals April 27 and 28. Since that first race, on March 18, 1978, the World of Outlaws has established itself as the premier dirt racing organization with the top Sprint Car drivers and teams all racing under The Greatest Show on Dirt banner.

The 40th Anniversary celebration of the World of Outlaws has already created a huge buzz in the sport as the Series retroactively added all preliminary Feature victories to create an accurate and accumulative All-Time Win List.

Now with the Series returning to Devil’s Bowl, home to the first-ever World of Outlaws race, The Greatest Show on Dirt is ready to ramp up the anniversary celebration for an action-packed weekend to end the month of April.

“We can’t wait to celebrate our 40th with our Texan family,” said World of Outlaws CEO (and fellow Texan) Brian Carter. “Since that historic weekend in 1978 the fans of the metroplex have had a special place in our hearts and our history. It’s an emotional weekend.” Devil’s Bowl is one of seven tracks on the inaugural season scheduled that the Series will return to in 2018, and the first of those seven to appear on this year’s schedule.

As part of its 40th Anniversary tour, the Series will honor each of these tracks with a commemorative marker of that first visit in 1978, noting the date of the visit and the race winner. The first of these plaques will be presented to Devil’s Bowl Speedway this month during the Texas Outlaw Nationals.

Additionally, there will be a limited edition vintage poster for the first 500 fans through the gates at Saturday’s events. The merchandise team has been hard at work designing a must-have World of Outlaws 40th Anniversary T-shirt design that will debut at Devil’s Bowl as well. A world of stories now comprises the rich 40-year history of the World of Outlaws.

The Series encourages all members of the Sprint Car community to share #MyOutlawMoment, that moment that made them fall in love with the sport or cemented it. All season long there will be a tent at the World of Outlaws souvenir trailer where you can document your memory alongside other fans, drivers and officials. Or simply share it on social using #MyOutlawMoment. The Series will carve out new moments, on and off the track, for some of the best as the season continues.

On the track, The Greatest Show on Dirt continues to live up to its name. Nine-time Series Champion Donny Schatz continues to accumulate wins, but this year is being heavily challenged by last year’s Kevin Gobrecht Rookie of the Year Sheldon Haudenschild, who is tied with Schatz with three wins to lead the Series as the schedule picks up. The Outlaws have a star-filled lineup of drivers following the Series full-time and all will be looking for a strong two-day weekend at Devil’s Bowl. Saturday’s event at Devil’s Bowl will pay a cool $20,000 to the winner, with an increased purse all the way through the field, including $1000 to start the Feature.

Reserved seating for the Texas Outlaw Nationals and the World of Outlaws 40th Anniversary Celebration at Devil’s Bowl are still available and can be purchased here. If you can’t make it to the track, be sure to watch all the action LIVE on DIRTVision.com!