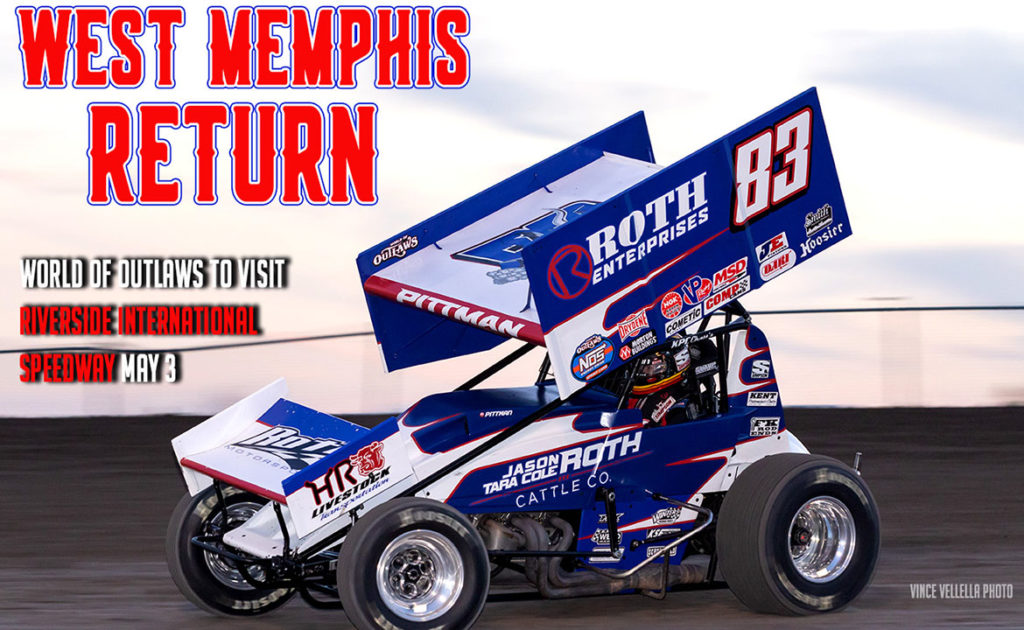 Daryn Pittman will look to claim his third win at the track, after holding off several battles for the lead last year, while putting on a show that demonstrated why the Series is The Greatest Show on Dirt.

Pittman pulled away to the early lead on the quarter-mile track, but Sheldon Haudenschild kept the 2013 champion in his sight. The No. 17 NOS Energy Drink car of Haudenschild hunted Pittman lap by lap, keeping the pressure on him for the majority of the race.

Lap traffic became an issue for Pittman early on in the race. Stuck behind the lap car of Ian Madsen, Pittman’s pace slowed, allowing the high-side riding Haudenschild to jolt by Pittman off of turn four to the lead on Lap eight. Haudenschild’s glory didn’t last long though. Pittman found an opening underneath Madsen in turns one and two, and getting by he and Haudenschild to reclaim the lead.

Halfway through the 40-lap Feature, Haudenschild got too greedy riding the high-side of the track, jumping the cushion, hitting the wall and flipping on his side. His misfortune placed Paul McMahan in second and right on the pumper of Pittman.

McMahan tried high. He tried low. But didn’t have enough to get by Pittman. And while he tried everything he could, Brad Sweet worked his way by McMahan for second, presenting a new challenge for Pittman.

Sweet kept Pittman within a car length distance. He would get a run on him off of turn four, but Pittman could pull back away off turn two. On the final lap of the race, Sweet tried one more hard charge into turns three and four. It stuck. He had the traction to get alongside Pittman. But on the exit of turn four, Sweet tapped the outside wall and watched Pittman pull away to the victory.

The victory was a shot in the arm to Pittman’s 2018 season, being his first win of the year. That’s not a concern for Pittman this year, having won the first two races of the year at Volusia Speedway Park. However, he has yet to win since then.

He and Sweet are sure to put on another thrilling show. Both are in a tight points battle with 10-time Series champion Donny Schatz. The three have been the most consistent drivers this year, scoring several podiums and finding the top-10 almost every race.

Haudenschild will also be hungry for his first win of the season, being close to a victory several times this year already.

Following the Series’ visit to Riverside International Speedway, The Greatest Show on Dirt will make its next stop Saturday, May 4, at Tri-State Speedway in Haubstadt, Ind.