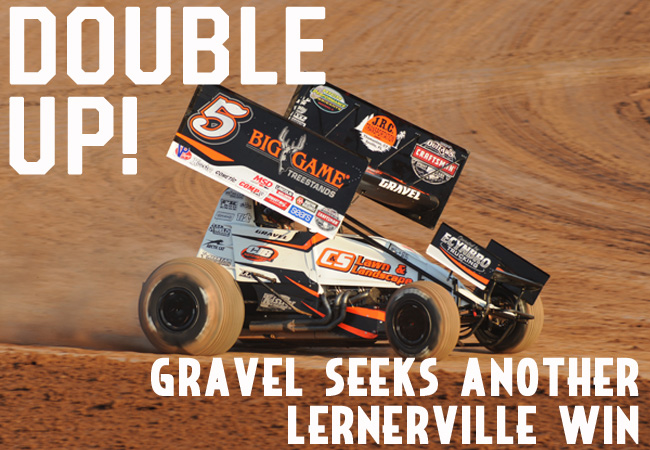 CONCORD, N.C.. – August 24, 2016 – Lernerville Speedway is a place of both triumphant memories and unfinished business for World of Outlaws Craftsman® Sprint Car Series Platinum driver David Gravel. With more recent successes than shortcomings at the 4/10-mile, Gravel will go head-to-head against the latter at Lernerville’s Commonwealth Clash on Saturday, Sept. 24.

Flashback to the 2014 season, the last time the World of Outlaws had the Commonwealth Clash on its schedule: Gravel was in contention to beat the field into the checkers like he had in his heat race earlier in the night. There was one man standing in his way: Joey Saldana. Saldana, a fellow Platinum driver, won the $10,000 purse that night. It was only fitting the two drivers – starting the feature in third and fourth – would clash.

Though Gravel finished runner-up in the last Commonwealth Clash, the DDR Motorsports wheelman found his silver lining at the Don Martin MemorialSilver Cup this year. Here Gravel won his first series race at Lernerville, along with the $25,000 prize for the track’s crown-jeweled sprint show dedicated to the former track owner. He will now seek to carry that momentum into a show he was close to winning just two seasons ago.

“My first win there happened to be the Silver Cup,” said Gravel, who competed in a handful of unsanctioned shows at the track. “It was a big payday, and there’s lot of history to the event. It was definitely great. I always look forward to coming to Lernerville because it’s always good racing.”

He had to wait nearly two years to see Victory Lane at Lernerville. At the last Commonwealth Clash, Gravel was side-by-side with Saldana for 15 of the 35 laps. Saldana said he was able to fend off Gravel because he was able to get more traction at the bottom of the track. The win was Saldana’s second consecutive trip to Victory Lane.

“Lernerville has always been one of my favorites,” Gravel said. “That night we were really good and had an awesome battle with Joey, but came up just a little short. But you know, it was a really good show for the fans and to finish first or second, you really can’t complain.”

The series’ return for the Commonwealth Clash is one Gravel anticipates being another instant-classic. At the Silver Cup, Gravel said he laid down a “pretty good” qualifying lap – registering the quick time of the night with a 13.176. The track record of 12.334 seconds was established by Saldana on May 15, 2002.

“We did a lot of good things there,” Gravel said. “I’m ready to go back and see what we can do.”

Gravel has a lot on the line as the season wraps up. He is currently 250 points behind leader Donny Schatz, and the track attracts the biggest drivers and super-fans across the region.

“It’s going to be an extremely fun weekend a lot of us will be looking forward to,” Gravel said. “And you know, we don’t get to go to Lernerville all that often, so anybody who wants to see us put on a great show, that’s what we’re going to do.”

Learn how to purchase tickets to the Commonwealth Clash at Lernerville Speedway.