The Greatest Show on Dirt Set to Invade Texas 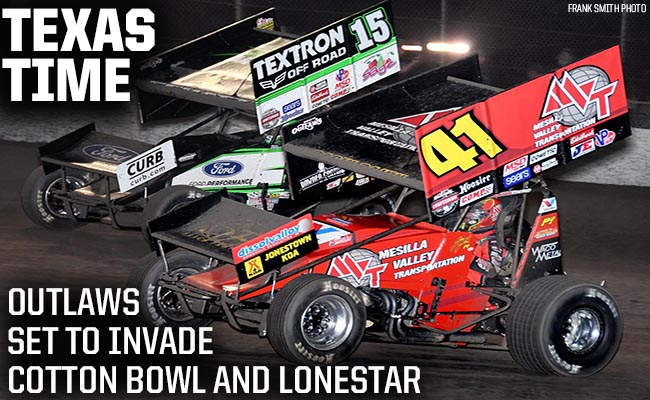 CONCORD, NC – February 13, 2018 – After an exciting DIRTcar Nationals in Florida, the World of Outlaws Craftsman Sprint Car Series is set to invade Texas for the first of two visits in 2018. The Outlaws will return to the Cotton Bowl Speedway in Paige, TX for just the second time in the Series 40-year history on Friday, February 23, 2018 before making their 12th appearance at the LoneStar Speedway on Saturday, February 24.

Now nine-time Series Champion, Donny Schatz is off to the fastest start of his illustrious career coming off four Feature wins in five starts, including a sweep of the All-Star Circuit of Champions, at Volusia Speedway Park to capture his first ever DIRTcar Nationals Big Gator Championship. In Outlaw competition, Schatz scored wins on consecutive nights to end the week and opened the season with a 14th to fourth charge on a lightning-fast surface.

The story of 2018 for the rest of the World of Outlaws Craftsman Sprint Car Series is who will challenge Schatz this year. With arguably the strongest group of Outlaws in over a decade, Brad Sweet, coming off a runner-up finish at the DIRTcar Nationals, seems ready to go.

“We worked all week and we’re still chasing the No.15,” Sweet, who won the lone Outlaw appearance at Cotton Bowl back in 2016, said after DIRTcar Nationals. “He makes us better,” last year’s runner-up in the Series Point Standings added.

Saturday night the World of Outlaws will travel down the road to LoneStar Speedway in Kilgore, TX to the 1/3rd mile oval. The Series returned to LoneStar last year for the first time in seven years with none other than Donny Schatz dominating the event, leading all 35 laps. Will Schatz lead the way again?

Perhaps, Sheldon Haudenschild in his new ride, the Stenhouse Jr. – Marshall NOS Energy No.17, is ready to make some more noise. The 2017 Kevin Gobrecht Rookie of the Year wasted no time getting acquainted with his new ride winning the Season Opener at Volusia, his first ever Outlaw triumph, in thrilling fashion. The next two nights, Haudenschild charged from 21st to seventh and 13th to third, allowing the second-generation racer to leave Florida second in the Outlaw Point Standings, just 12 markers back of Schatz.

Jason Johnson enters the weekend third in points, 18 points back, on the strength of two top-five finishes at Volusia, including a heartbreaking runner-up finish where he led 28 of the 30 laps before Schatz stole the victory. Interestingly enough, Johnson and Haudenschild finished on the podium in 2017 at LoneStar and will look to ride that confidence into the weekend.

A stout field of entries is expected for both nights in Texas with the World of Outlaws Craftsman Sprint Car Series. Along with the 17 teams that will follow the full Series, Indiana’s Joey Saldana, Pennsylvania’s Tim Shaffer, Iowa’s Terry and Austin McCarl, California’s Cory Eliason, Dominic and Giovanni Scelzi are among the confirmed entries for the weekend’s action. Texas natives Aaron Reutzel, who moved up to 410 Sprint Cars full time in 2018, and Sam Hafertepe, Jr. will look to score a hometown victory.

Tickets for both events are available at WoOSprint.com or by clicking which track you are looking for here Cotton Bowl / LoneStar. If you cannot make it to the track, be sure to watch all the action live on DIRTVision.com as they will broadcast every race from the World of Outlaws Craftsman Sprint Car Series 40th Anniversary Season live to fans across the globe. The Outlaws will return to Texas on April 27, 28 for the running of the Texas Outlaw Nationals at Devil’s Bowl Speedway in Mesquite, TX.

WHAT TO WATCH FOR: World of Outlaws Head to Texas for Cotton Bowl Doubleheader