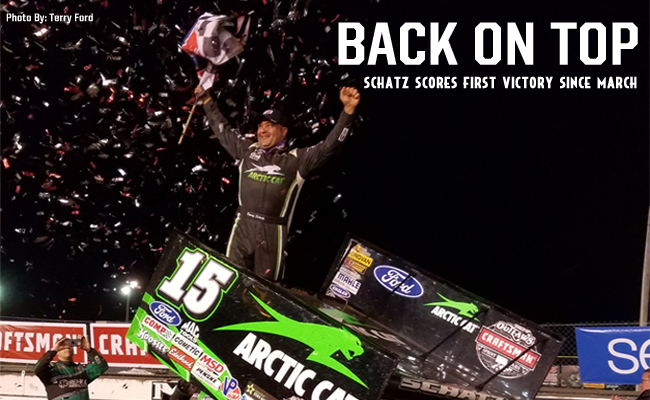 SEDALIA, Mo.—May 5, 2017—Missouri State Fair Speedway has always been a special place for eight-time and defending World of Outlaws Craftsman® Sprint Car Series champion Donny Schatz. He made his first start with the series back in 1993 as a teenager at the historic track.

Schatz returned to the half-mile on Friday night, as the Outlaws visited the track for the first time since 2012 and was victorious in the Sedalia Show-Me State Showdown to earn his third-career win at Missouri State Fair Speedway and his seventh of the season aboard the Arctic Cat/Ford Performance J&J for Tony Stewart Racing.

“This is extra special, with this being the first place I ran at,” said Schatz. “We had Mark Miller from Artic Cat here and this is kind of his home track. He had a premonition that we were going to have a good night and I’m glad he had that premonition.”

Schatz started third and got around Joey Saldana for second on the seventh lap. He then began to close on leader Daryn Pittman as the lead duo negotiated lapped traffic. Schatz made his move on the low side of the back straightaway to take the top spot on lap-11.

Once out front, Schatz began to pull away. After the taking the white flag, the only caution of the 25-lap main event flew, setting up a green-white-checker finish with Schatz in the lead and Kerry Madsen lining up second. Schatz used a strong restart to pull away en route to the win.

“I was actually looking for the car that was stopped, but it wasn’t stopped,” said Schatz of the caution. “That’s the way it goes sometimes and those breaks sometimes go your way. Our car was awesome. April really didn’t show it, but April is over. That’s what racing is about. You’ll have some good days and you are going to have a lot of bad ones. Today was one of the good ones. We just keep digging and finding ways to make the race car faster. Hats off to them, they are on their game and they got us a win tonight.”

The win for Schatz snapped a month-plus win drought, dating back to March 18 at Thunderbowl Raceway in California. He used traffic to his advantage and managed tire wear as well on his way to the $10,000 triumph. With the first 24 laps going non-stop, Schatz was in his comfort zone on the long green-flag run.

“You don’t really ever bide your time,” explained Schatz. “You have to be smart with your tires. This is a high speed track and it’s pretty easy the fine line between stuck (to the track) and spinning (your tires). When I rolled across the scales, I saw the other cars around me and I saw their tires were really blistered. Mine looked good, so I guess that means I did my job at the right parts of the race. Early on, when you have all that fuel, they are not a lot of fun to drive. You have to be cautious and search out the race track and see what happens.”

Pittman, who led the first 10 laps, after starting on the pole, finished a season-best second, as he continues to close in on his first win of the season. In open track in the early going, Pittman pulled away from Joey Saldana and had couple-second lead in the first six laps.

“It did feel good to run up front,” said Pittman. “These guys are really working hard. It’s been a struggle this year and I have a great group of guys and I am really proud to be a part of this team. There is no doubt we’ll get that win and we keep getting better. We made a lot of headway and had a pretty solid car all night long. If we are going to beat the 15 car and some of these guys consistently, we still have some work to do. We’ll get this Great Clips car to victory lane and it will be fun when we do.”

Kerry Madsen lined up second for the green-white-checker restart and ended up in third, after Pittman used a strong restart to get around him. Madsen lined up fifth at the start of the 25-lap main event

“I was going for the win,” said Madsen of his strategy on the restart. “I tried that low-middle there and feed off Donny’s right rear on the restart. I should have done the opposite and fed off the left rear and gotten better grip. I went to attack and wasn’t close enough to attack and got attacked. It was a fun race and our car was a rocket ship.”

The World of Outlaws Craftsman Sprint Car Series returns to action on Saturday, May 6 at 81 Speedway in Park City, Kansas. The Kansas Outlaw Klassic presented by Great Clips, Murphy Tractor & Equipment Co and the City of Park City, Kansas marks the series’ first visit to 81 Speedway since 2006.