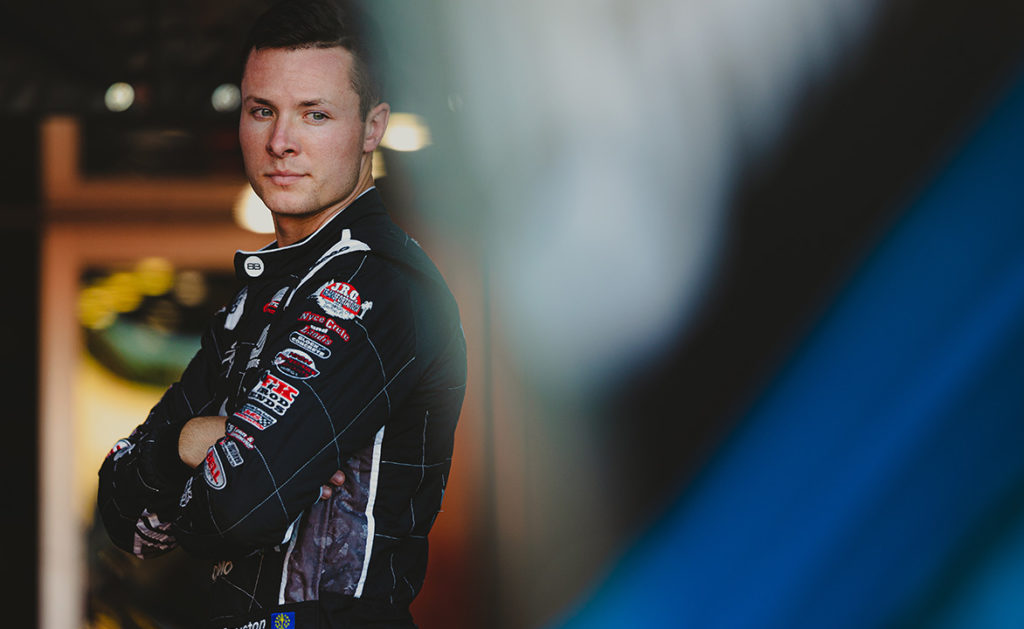 He knew challenges would arise, being his first full-time year on the 80-plus race tour across the country and his team CJB Motorsports’ first full season with the World of Outlaws since 2019. But then they won. Big. And a couple months later they won again. Now, they expect nothing less.

“I feel like we’ve exceeded our expectations but having that success there early at Bristol and then at Huset’s has made us more hungry now,” Bayston said. “Our expectations have risen quite a bit. We just go out and chase it every night. Try to compete. Try to win. I just have to do my part. It’s really, really good to have a good team behind me that gives me the ability to do that.”

The Lebanon, IN driver picked up his first Series win at Attica Raceway Park last year with Sam McGhee Motorsports. Months later he joined CJB Motorsports to finish out the 2021 season and prepare for this Rookie of the Year run in 2022. In their fourth race together last year, Bayston won with the Pennsylvania-based team at Port Royal Speedway.

That victory provided them with the confidence they could win again in their first full World of Outlaws season together, but even that didn’t prepare them for what they were going to accomplish before the halfway point. Bayston stunned the Sprint Car world by besting Kyle Larson for the win at Bristol Motor Speedway and then backed that victory up a couple months later by winning at Huset’s Speedway.

To Bayston, the credit for that success goes to having an experienced team at CJB Motorsports – founded in 2005 – including the team’s long-time crew chief, and former World of Outlaws Crew Chief of the Year, Barry Jackson.

“It’s one of those deals where a lot of these guys have the ability to win championships and win races, but the most important part to getting to that point is having a good crew behind you and having good equipment,” Bayston said. “So, we’re happy to have (team owner) Chad Clemens behind us to provide us with good equipment. I’m fortunate to have three really solid guys with Barry (Jackson), Scott (Vogelsong) and Brendan (Collum), giving us the ability to have success and chase wins each and every night.

“It’s an essential and it’s really helped us this season get us to where we want to be quicker.”

Being able to lean on the expertise of Jackson and his crew guys has allowed Bayston the freedom to solely focus on driving, rather than having to have a hand in figuring out the set up or other aspects of the team. He pulls up to the trailer, tells Jackson what he’s feeling with the car and lets the veteran crew chief go to work with the confidence he can trust whatever adjustments Jackson makes.

While that trust and confidence in each other has led to early success, Bayston acknowledged there is still room for improvement.

He currently sits seventh in Series points, more than 200 points back from the lead, with 13 top fives (tied with 10-time Series champion Donny Schatz) and 23 top-10s in 39 starts. To him, where he’s getting beat in the points most is other drivers’ ability to better recover from a bad night.

“No matter what is thrown at them they’re still up-front contending to have a really, really good night,” Bayston said. “I think that has been our biggest issue so far, which I think has to do with my experience and making sure the car is where it needs to be, giving me the ability to have the opportunity to race through the field.

Kings Royal week at Eldora Speedway was up and down for Bayston, but he managed to secure a top-five during one of the points paying nights, giving he and CJB some momentum for their Pennsylvania return – a week they’ve had circled on their calendar all year.

The Series returns to Port Royal Speedway on Wednesday, July 20, with a $20,000 payday on the line and then will venture to Williams Grove Speedway for the Champion Racing Oil Summer Nationals, Friday-Saturday, July 22-23.

“I’m excited to get to Port Royal,” Bayston said. “One of my favorite tracks. It’s home in Pennsylvania for this team. That’s always special. I think there’s something good about coming home and kind of reset and letting the guys unwind a little bit. And get a little bit more prepared.

“It can be grueling and strenuous when you’re on the road for a while. It’s always good to get home and get recharged. But I’m excited to get to Pennsylvania and compete for some of those races and try to get ready, the National Open (at Williams Grove) is one that’s high up on the list for our CJB 5 team. I really want to be competitive and strong there. So excited to get back there and work on our car a little bit and get me a little more comfortable, as well.”

While expectations have risen, so has Bayston’s confidence and feeling of now being an “Outlaw.”

For tickets to the events at Port Royal and Williams Grove, CLICK HERE.