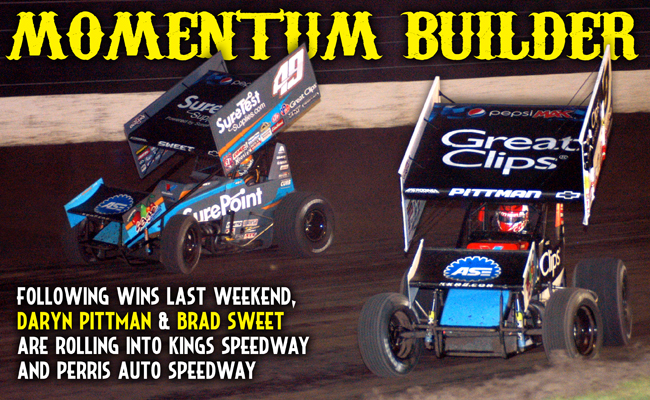 LAKE PERRIS, Calif. – April 9, 2014 – Daryn Pittman is coming off his second World of Outlaws STP Sprint Car Series win of the season on Sunday night at Calistoga Speedway, and after Friday night’s race at Kings Speedway in Hanford, he is headed down the California coast to the SoCal Showdown on Saturday at Perris Auto Speedway, a track where he’s won twice before, including last year.

Pittman and the entire Kasey Kahne Racing organization are definitely on a high right now, sweeping the podium at Calistoga on Sunday and picking up both victories, with Brad Sweet earning the win last Saturday night.

By no means will a repeat be easy for the defending series champion. Joey Saldana, the 2012 winner at Perris, is certainly closing in on his first win of the season after setting a track record in qualifying and posting back-to-back top-five finishes last weekend at Calistoga. Then there’s Kerry Madsen, a 2007 winner at Perris who has been racing with renewed passion this season that has him in the top-five in the championship standings with a win last month at Thunderbowl Raceway in Tulare, Calif.

Schatz reclaimed the overall championship points lead at Calistoga. He heads Friday to Kings Speedway in Hanford with a one-point lead over Pittman.

For Kinser, this will be the last time he races at Perris with World of Outlaws STP Sprint Car Series championship implications. Kinser is competing in 2014 on his “Salute to the King” tour marking his final run at a 21st Outlaw crown. There’s little doubt he’d like to notch a victory at Perris before taking his final checkered flag on the road.

For tickets and more information about this weekend’s events, click www.WorldofOutlaws.com.