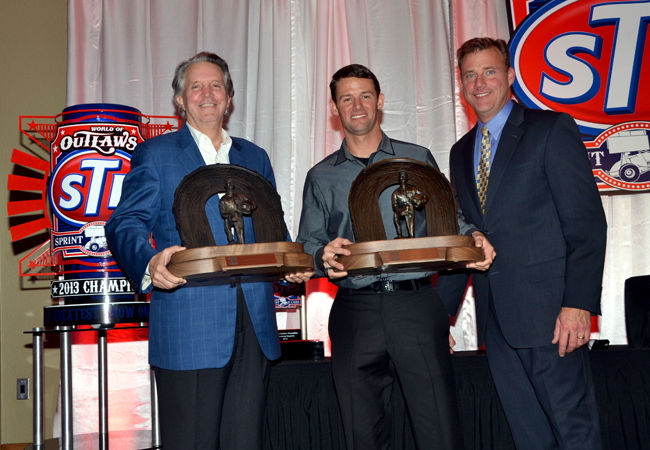 CONCORD, N.C. – Nov. 10, 2013 – After a realizing his dream of becoming a World of Outlaws STP Sprint Car Series champion on Saturday night, Daryn Pittman and his Kasey Kahne Racing team finally had the chance to celebrate on Sunday night during the “Night of Champions” Awards Banquet at the Great Wolf Lodge.

Pittman, 35, is the ninth different driver in 36 seasons to win the crown — the first from Oklahoma — and capped off the night with an emotional speech after receiving the champion’s trophy, ring and a check for $150,000.

“It was pretty emotional when we first got it, and then it became fun,” said Pittman, a native of Owasso, Okla., who had eight wins and 45 top-five finishes to lead the series wire-to-wire and win the championship by 14 points over Donny Schatz in the closest championship finish in World of Outlaws STP Sprint Car Series history. “We really enjoyed it last night, had a great time and woke up today and couldn’t be happier. This is a goal that I’ve been working towards for the last 15 years. I really wanted to enjoy this one, but already before I went to bed last night, I was thinking about next year.”

Pittman’s championship is the first World of Outlaws STP Sprint Car Series title for Kasey Kahne Racing and Mike Curb, who represented the team on Sunday night and shared great insight into the history of STP and racing as well as his passion for the sport. Kasey Kahne was in Arizona competing in a NASCAR Sprint Cup event.

“I want to say how proud I am to be speaking on behalf of Kasey Kahne,” Curb said. “Kale Kahne, Michael Carber and Kolten Gouse, and everyone you’ve seen up here tonight, they’re the people who made this happen. I’m just lucky to be a part of it. All I can tell you is thank you for allowing me to be a part of this sport. I cannot believe that we’re standing here. This is the most exciting thing in my life to be a part of winning a World of Outlaws STP Sprint Car Series championship.” 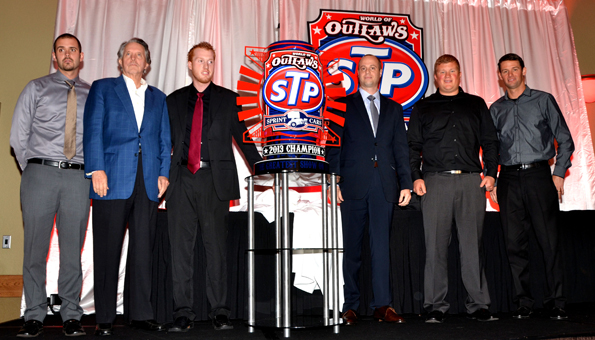 Kale Kahne received the Crew Chief of the Year Award and credited his success to his team, which was also honored with a special new STP Team Championship trophy that was presented by STP Brand Director Jamie Kistner.

“Our whole organization is like a family, we hang out, go to lunch, and go to dinner together, it’s a great team and fun to be around,” Kale Kahne said. “I don’t know all the crew chiefs who have gotten this award, but there have been some great guys who have received it. I couldn’t have gotten here with our crew of Kolten, Carber, Daryn and Kasey for giving us anything and everything we needed. Our first championship is awesome, but I’m already looking forward to begin working to the next one. We’re working on 2014 starting in a couple of days. Kasey’s pretty happy about it and wishes he were here.”

“Just to win two races this year was great,” said Gravel, of Watertown, Conn. “We had a lot of ups and downs, but overall it was a good year. Just to get my name etched in the history books with anything World of Outlaws is great. For me to be in it is awesome.”

Williams Grove Speedway was named the 2013 promoter of the year. Williams Grove PR Director Kevin Maloy accepted the award. “It’s great to win this award and we’re very appreciative that the World of Outlaws think so highly us and the effort that we put in our World of Outlaws STP Sprint Car Series events. The competitiveness of our drivers and passionate Posse fans give all of our events a unique and special atmosphere.”

In other special awards, Barry Jackson and GF1 Chassis were named the Chassis Builder of the Year while Speedway Engines was named Engine Builder of the Year. Jason Sides won a new golf cart from Jake’s Karts, Daryn Pittman and Kasey Kahne Racing won the VP Racing Fuels Award, and Donny Schatz was named the KSE Hard Charger of the Year. Schatz also won a set of wheels in a drawing from American Racing Custom Wheels.

Schatz, who earned $75,000 for his runner-up finish in the championship won 23 races in 2013 and kept up the pressure until the final lap of the season on Saturday night at The Dirt Track at Charlotte. In a theme that echoed throughout the night, Schatz thanked Steve Kinser and Sammy Swindell for paving the way for all of the racers who followed them.