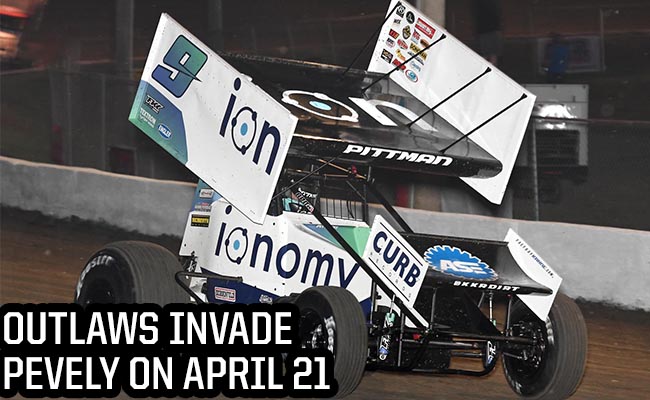 CONCORD, NC – The World of Outlaws Craftsman Sprint Car Series return to the fan-favorite Federated Auto Parts Raceway at I-55 in Pevely, MO on Saturday, April 21 with the running of the Spring Classic. I-55 has been a staple on the Outlaws schedule since 1987 when Brad Doty won the inaugural event and has been coveted by fans and drivers alike for its close-quarters racing action.

Mother Nature plagued Pevely when The Greatest Show on Dirt was in town last year, as the Series was only able to complete one of the three scheduled events. Rainout tickets from last year’s event at Pevely in April will be honored this year, but please call 844-DIRT-TIX to roll your seats over to this month’s event.

The only driver to beat the weather at I-55 last year was Daryn Pittman as he scored his first win of the 2017 season at Pevely in August and was scheduled to start on the pole the following night before Mother Nature intervened. Pittman’s win last year at I-55 was his first with the Series at the bullring since 2002. Pittman, sporting new colors for the first time, will look to land his Ionomy, Kasey Kahne Racing No.9 machine in Victory Lane at Pevely once again. Pittman has had a slow start to his 2018 campaign, sitting eighth in the Series point standings with four top-ten finishes.

The Owasso, OK native was on track for a strong run last Saturday at Arizona Speedway coming from 13th to fourth, before getting together with another competitor, ending his night. Pittman, the 2013 Series Champion, remains one of the most respected competitors on and off the track and boasts 72 career Outlaw victories, good enough for 10th all-time on the Series win list.

Mother Nature has prevented teams from getting into any sort of rhythm for the 2018 season, but that hasn’t stopped Donny Schatz and Sheldon Haudenschild from establishing themselves as the early frontrunners of the Series. Schatz, the nine-time Series Champion, remains in top form to no surprise and leads all racers with four wins on the 2018 campaign, including a recent triumph from 12th at Arizona.

Haudenschild, the 2017 Kevin Gobrecht Rookie of the Year, has been the surprise of the Series thus far, capturing his first three World of Outlaws Craftsman Sprint Car Series career victories right out of the gate this season and sitting second in the point standings, just 48 markers behind Schatz. Haudenschild’s triumph total could be even higher, if not for some misplaced luck. Sheldon got together with a lapped car at Tulare while leading and hopped the cushion at Arizona, whilst out front as well. It’s no secret that crew chief Tyler Swank has the Stenhouse Jr.-Marshall No.17 buzzing lately, and it’s also no secret that Pevely is Sheldon’s type of track. Sheldon’s father, Jac, captured three Outlaw victories in a span of four years at Pevely, and Sheldon will look to add himself to the historic list of drivers to land in Victory Lane at Pevely.

Don’t miss a second of the action at the I-55 bullring, get your tickets today here. If you can’t make it to the track, be sure to watch LIVE on DIRTVision.com! Following the Outlaws’ visit to Pevely, the Series will celebrate its 40th Anniversary at its birthplace, Devil’s Bowl Speedway in Mesquite, TX on April 27 and 28. Tickets for Devil’s Bowl are available here.