Outlaws Invade Charlotte with Outlaw Showdown on May 25

Tags: The Dirt Track at Charlotte 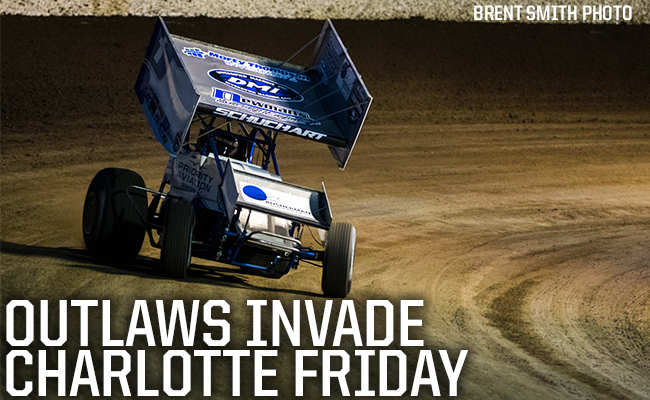 CONCORD, NC – May 18, 2018 – The World of Outlaws Craftsman Sprint Car Series makes its lone stop at The Dirt Track at Charlotte Motor Speedway on May 25, before the Series concludes its 40th Anniversary Season with one of the fastest growing events in dirt track racing, the World of Outlaws World Finals.

The Dirt Track at Charlotte Motor Speedway has become one of the premier race tracks in the country and is adored by fans and drivers alike. “We absolutely love racing at Charlotte. It’s always a huge crowd, and the racing is always good, with multiple grooves and plenty of room to move around,” said last year’s Outlaw Showdown winner, Logan Schuchart.

Schuchart scored the victory in May of last year in thrilling fashion, taking the lead from Brad Sweet with two to go and edging last year’s runner-up in the Point Standings to claim the $12,000 top prize. Schuchart may still be looking for his first win of the year in 2018 but is currently riding momentum after a pair of second-place finishes to Donny Schatz at Eldora during Let’s Race Two weekend.

Schuchart relishes the opportunity to return to Charlotte in search of a victory, as well as preparing for the season-ending World Finals. “We run well at Charlotte. The track fits my driving style, and we have good car speed there. It’s always nice to return to see how we stack up for the World Finals. The World Finals is one of the toughest fields we race against all year, so it’s always good to get some laps in before then,” Schuchart added.

Schuchart enters Outlaw Showdown weekend eighth in the Series Point Standings after a rain-infested week in his home state of Pennsylvania. The Outlaw Showdown always draws a unique field of cars, and you can expect to see Trey Starks, Cole Duncan and current USAC National Midget points leader Logan Seavey battle the 15 Outlaw regulars. The event will be Seavey’s World of Outlaws debut outside of iRacing. With the race being in Charlotte, you never know who else may roll into the pit area.

Reserved tickets are still available for the Outlaw Showdown. Get yours today.

If you can’t make it to the track, be sure to watch all the action LIVE on DIRTVision.com! Following the Outlaws visit to Charlotte, the Series continues its 40th Anniversary season with a Memorial Day visit to Lawrenceburg Speedway in Indiana before heading to Illinois for the Series inaugural visit to Fairbury American Legion Speedway on Wednesday, May 30!