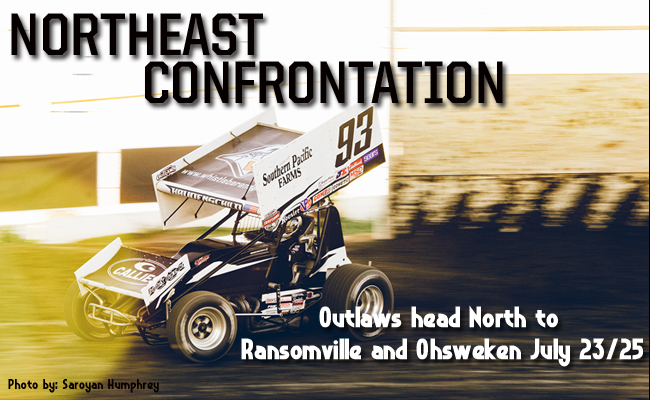 Followed by Only Canadian Stop at Ohsweken

CONCORD, NC – July 10, 2017 – The World of Outlaws Craftsman® Sprint Car Series is in the midst of the busiest stretch on the 2017 schedule, and the task at hand doesn’t get easier anytime soon. The Series heads north at the end of July for its first race of the season in New York,The Big “R” Outlaws Shootout presented by Budweiser at Ransomville Speedway on July 23.

Following the stop at the track located just 20 miles from Niagara Falls, NY, the Outlaws make their only stop in Canada at Ontario’s Ohsweken Speedway on July 25 for the Arrow Express Six Nations Showdown.

The Outlaws’ visit to Ransomville is only their fourth in Series history and first since 1997, when Andy Hillenburg won at the half-mile. Since many of the Outlaws have not seen the track before, it may level out the playing field for drivers like Kevin Gobrecht rookie-of-the-year contender Sheldon Haudenschild, who enters the race with the same notebook as the rest of the veteran-laden Outlaw field. However, he knows it doesn’t make the challenge of racing with the Outlaws any easier.

“That’s why the guys are the best: because they’re good at going to new tracks and being really fast right from the get-go,” Haudenschild said. “It’s definitely a challenge, but I feel I’ve done pretty decent for my first year around and seeing some of these tracks for the first time also. It’s no excuse. Being at new tracks, you just have to adapt and try to be fast right from the get-go.”

New York and Ontario are known for their especially hard and dry slick racing surfaces that differ from other parts of the country. The tracks are often wide with plenty of room for racing, but are very much about maintaining momentum with a smooth lap.

“It’s definitely different. A lot of the places we go are pretty different though, so hopefully we’ll be able to adjust and be fast,” Haudenschild continued. “You have to be a little bit more patient with tracks like that, that maybe don’t have as much grip. I feel like last year we were really good on some slick tracks, so I think we should be alright there.”

Despite never having set foot on the property at Ransomville or Ohsweken, Haudenschild insists his preparation remains the same for every race, but perhaps with a little extra homework.

“I’ll maybe watch some videos of previous races the Outlaws have been there,” Haudenschild said. “I don’t really do anything different. I stay in the routine and stay consistent at what we do each night.”

The Outlaws will enjoy a day off following the stop at Ransomville before crossing into Canada to stop at Ohsweken. The high-banked, 3/8-mile oval has been an annual stop for the Outlaws since 2007. Donny Schatz won the Series visit last year, while Stewart Friesen upset the Outlaws and became the second Canadian driver to ever win an Outlaw race during the 2015 edition of the Six Nations Showdown. Schatz has earned a Series-high four wins at Ohsweken, followed closely by Jason Sides with three victories.

When the Outlaws stop at Ohsweken this year, they’ll have two familiar outside forces to contend with: Kyle Larson and Rico Abreu. Both drivers have won against the Outlaws already this year and are confirmed entrants for the event. They’ll each look to earn their second Outlaw victories of the season during the stop.

“I am really excited to make my first trip to Canada and also to be racing a Sprint Car,” Larson said. “Ohsweken has always produced great racing with multiple lines, so it should be fun to try and adapt to the track.”

Abreu will also be making his first Ohsweken start during his trip north.

“I’m excited to compete in Canada at the famous Ohsweken Speedway,” Abreu said. “All I have heard is great things about the racing surface as well as the facility. It is definitely something we’re looking forward to.”

Advanced reserved tickets for the Big R Outlaw Shootout presented by Budweiser on July 23 at Ransomville Speedway are available at www.WorldofOutlaws.com/Tickets. Advanced seating and event information is available for the Six Nations Showdown presented by Arrow Express at Ohsweken Speedway on July 25 by visiting www.OhswekenSpeedway.com.